Baylisascaris procyonis, the raccoon roundworm, is a rare but serious cause of neurologic and ocular disease in humans. Only larval stages are involved in zoonotic infections. It is not known whether other Baylisascaris species, such as B. columnaris of skunks, can cause baylisascariasis in humans. 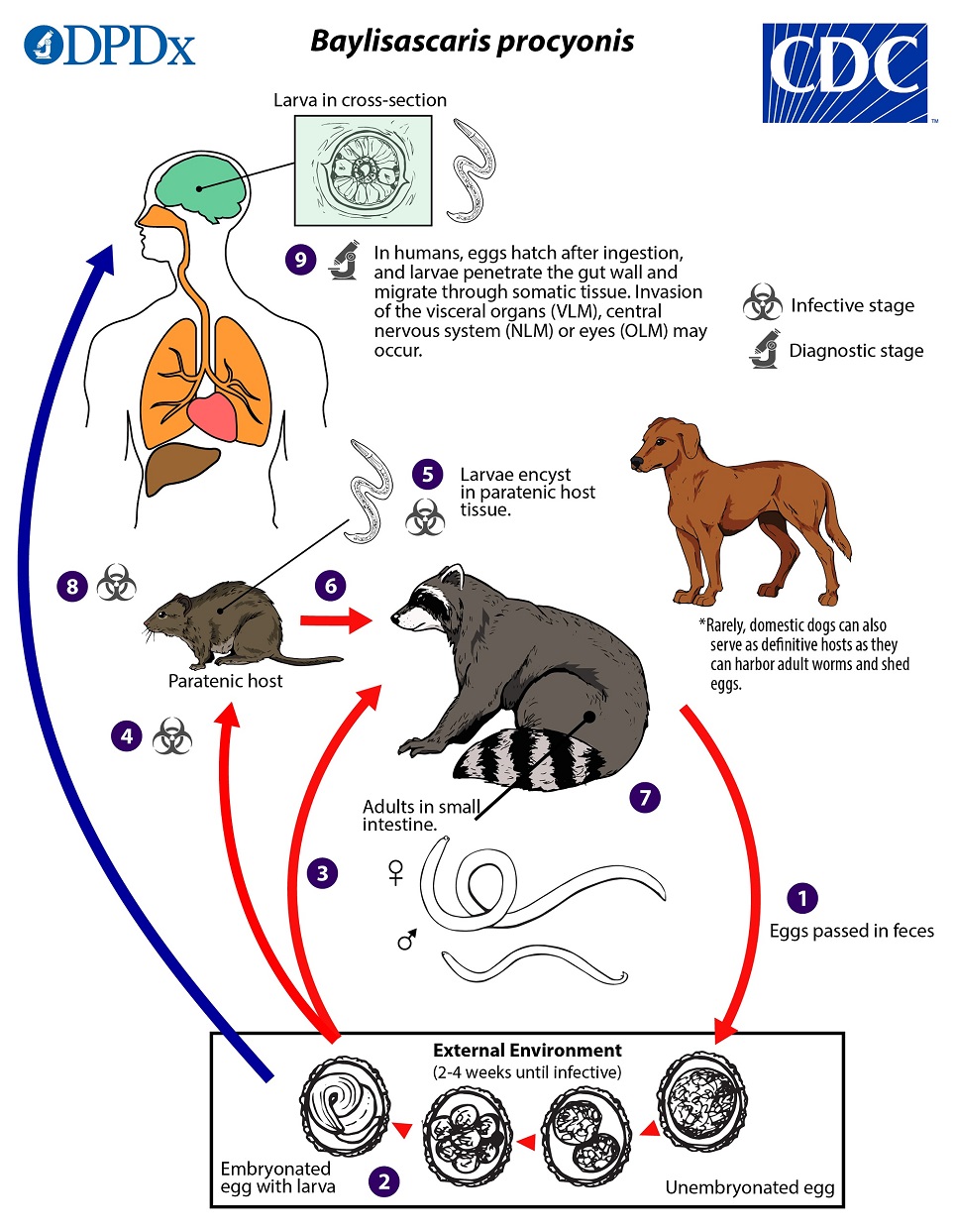 Baylisascaris procyonis completes its life cycle in raccoons, with humans acquiring the infection as accidental hosts (dogs serve as alternate definitive hosts, as they can harbor adult worms and shed eggs). Unembryonated eggs are shed in the environment

, where they take 2–4 weeks to embryonate and become infective

. Raccoons can be infected by ingesting embryonated eggs from the environment

. Many mammals and birds can act as paratenic hosts

for this parasite: eggs ingested by these hosts hatch and larvae penetrate the gut wall and migrate into various tissues where they encyst

. The life cycle is completed when raccoons eat these hosts

. The larvae develop into adult worms in the raccoon’s small intestine

and eggs are passed in raccoon feces. Humans become accidentally infected when they ingest infective eggs from the environment

. B. procyonis larvae continue to increase in size up to about 1.8 mm in human hosts, but they are not capable of migrating to the intestine and developing to adulthood. Tissue damage and the signs and symptoms of baylisascariasis are often severe because of the larger size of B. procyonis larvae and their more invasive course of migration.

Raccoons are the major definitive host for B. procyonis. Rarely, domestic dogs and possibly other procyonids (e.g., kinkajous) may have patent infections and shed eggs in feces. The range of paratenic hosts that are susceptible to larva migrans is broad; infections have been recorded in over 150 species of birds and mammals.

Baylisascaris procyonis is widespread among raccoons in the United States and Canada but prevalence varies regionally. Prevalence in raccoons is extremely high in the Northeast, Midwest, and on the West Coast, sometimes in excess of 80%. This roundworm has also been found in raccoons in the Southeast and Southwest regions where it was historically absent, although the prevalence is generally much lower than in northern latitudes. B. procyonis has also been introduced to many parts of Europe, China, and Japan through trade of live raccoons. Most documented human cases have occurred in areas where the parasite is common (e.g., California, Washington, Minnesota, New York).

Baylisascaris procyonis eggs are 80—85 µm by 65—70 µm in size, thick-shelled, and usually slightly oval in shape. They have a similar morphology to fertile eggs of Ascaris lumbricoides, although eggs of A. lumbricoides are smaller (55—75 µm by 35—50 µm) and more coarsely pitted.  As humans are not definitive hosts for B. procyonis, eggs are not excreted in human feces. The following images show larval development within the eggs, from a freshly-shed unembryonated egg to eggs containing L1 larvae. Images courtesy of Dr. Cheryl Davis, Western Kentucky University, KY. 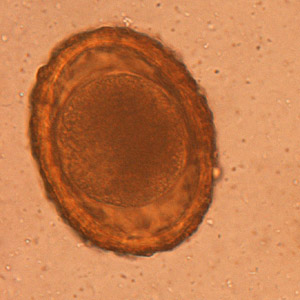 Figure A: Unembryonated egg of B. procyonis 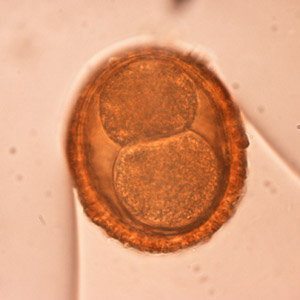 Figure B: Egg of B. procyonis. In this specimen, the developing embryo has started to divide. 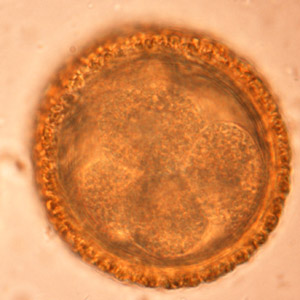 Figure C: Eggs of B. procyonis in a further state of cleavage. 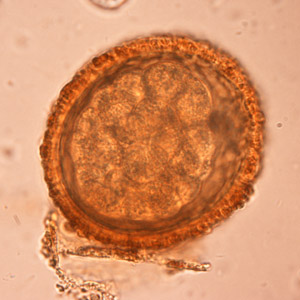 Figure D: Eggs of B. procyonis in a further state of cleavage. 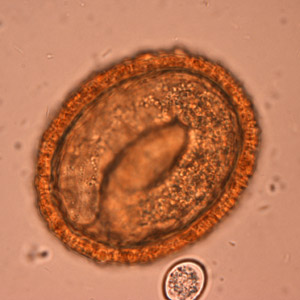 Figure E: Embryonated eggs of B. procyonis, showing the developing larva inside. 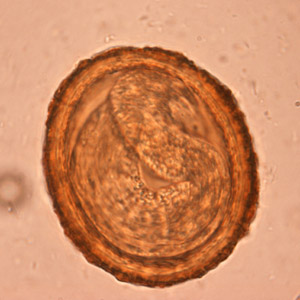 Figure A: Larva of B. procyonis hatching from an egg. 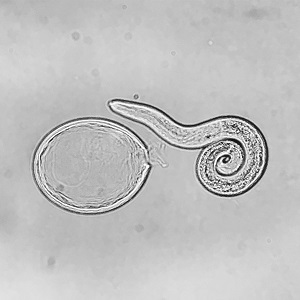 Figure A: Egg of B. procyonis in formalin-fixed stool from a raccoon. Image contributed by the Oregon State Public Health Laboratory.

Larvae of Baylisascaris spp. in tissue. 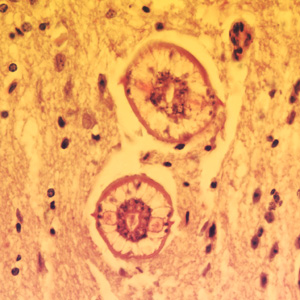 Figure A: Cross-sections of larvae of B. columnaris in the brain of a laboratory-infected mouse. The larval morphology and microscopic manifestations are essentially identical to B. procyonis. Image taken at 400x magnification. 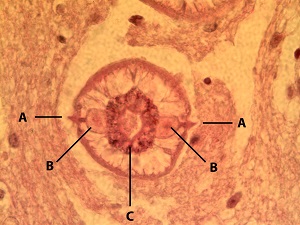 Figure B: Higher magnification (1000x oil) of a cross-section of B. columnaris from the same specimen as Figure A. Notice the prominent lateral alae (A), excretory columns (B) and multinucleate intestinal cells (C). 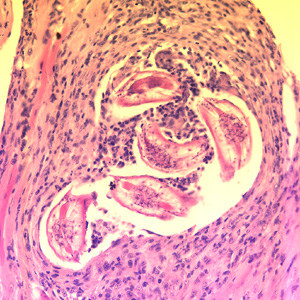 Figure C: Cross-sections of larvae of B. columnaris in muscle of a laboratory-infected mouse. The larval morphology and microscopic manifestations would be similar with B. procyonis in human tissue. Image taken at 400x magnification.

Figure D: “Squash prep” showing two B. procyonis larvae, in the brain tissue of an experimentally infected Peromyscus mouse. Flattening tissue into a thin layer between glass plates can be a useful way of visualizing migrating larvae in infected paratenic hosts. Note the inflammatory tracts around the larvae.

Baylisascaris procyonis adults are found only in the definitive host, the raccoon (rarely dogs). They have the typical large and robust form of ascarid worms, and lack the prominent cervical alae of adult Toxocara species. Males measure 6—9 cm in length and demonstrate the curved posterior end similar to Ascaris. Females are very large and measure 8—18 cm in length. 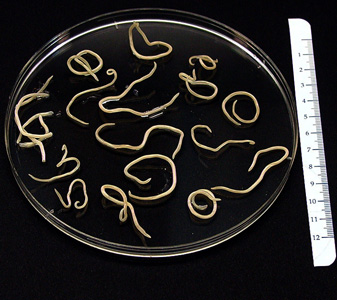 Figure A: Several adults of B. procyonis from a raccoon

Figure B: Large adult female B. procyonis from a naturally infected raccoon.

Human infections are difficult to diagnose, and often the diagnosis is by exclusion of other causes. Results from complete blood count (CBC) and cerebrospinal fluid (CSF) examination often reveal eosinophilia. Examination of tissue biopsies can be extremely helpful if a section of larva is contained, but removing a piece of tissue in which there are larva present can be problematic. Ocular examinations revealing a migrating larva, larval tracks, or lesions consistent with a nematode larva are often the most significant clue to infection with Baylisascaris.

CDC has developed an immunoblot for detection of antibodies to recombinant Baylisascaris antigen (rBpRAG-1) in serum or CSF, which can be performed for cases of clinical neurologic disease when the index of suspicion is high*.

Standard protocols for the processing of histologic, serum, and CSF samples apply.