Anisakiasis is caused by the ingestion of larvae of several species of ascaridoid nematodes (roundworms), which are sometimes called “herringworm”, “codworm”, or “sealworm”, in undercooked marine fish. Known human-infecting anisakid species include members of the Anisakis simplex complex [A. simplex sensu stricto, A. pegreffii, A. berlandi (=A. simplex C)], the Pseudoterranova decipiens complex (P. decipiens sensu stricto, P. azarasi, P. cattani, and others), and the Contracecum osculatum complex. Recent genetic studies have revealed high diversity within these anisakid groups, suggesting additional cryptic species are likely represented in zoonotic infections. 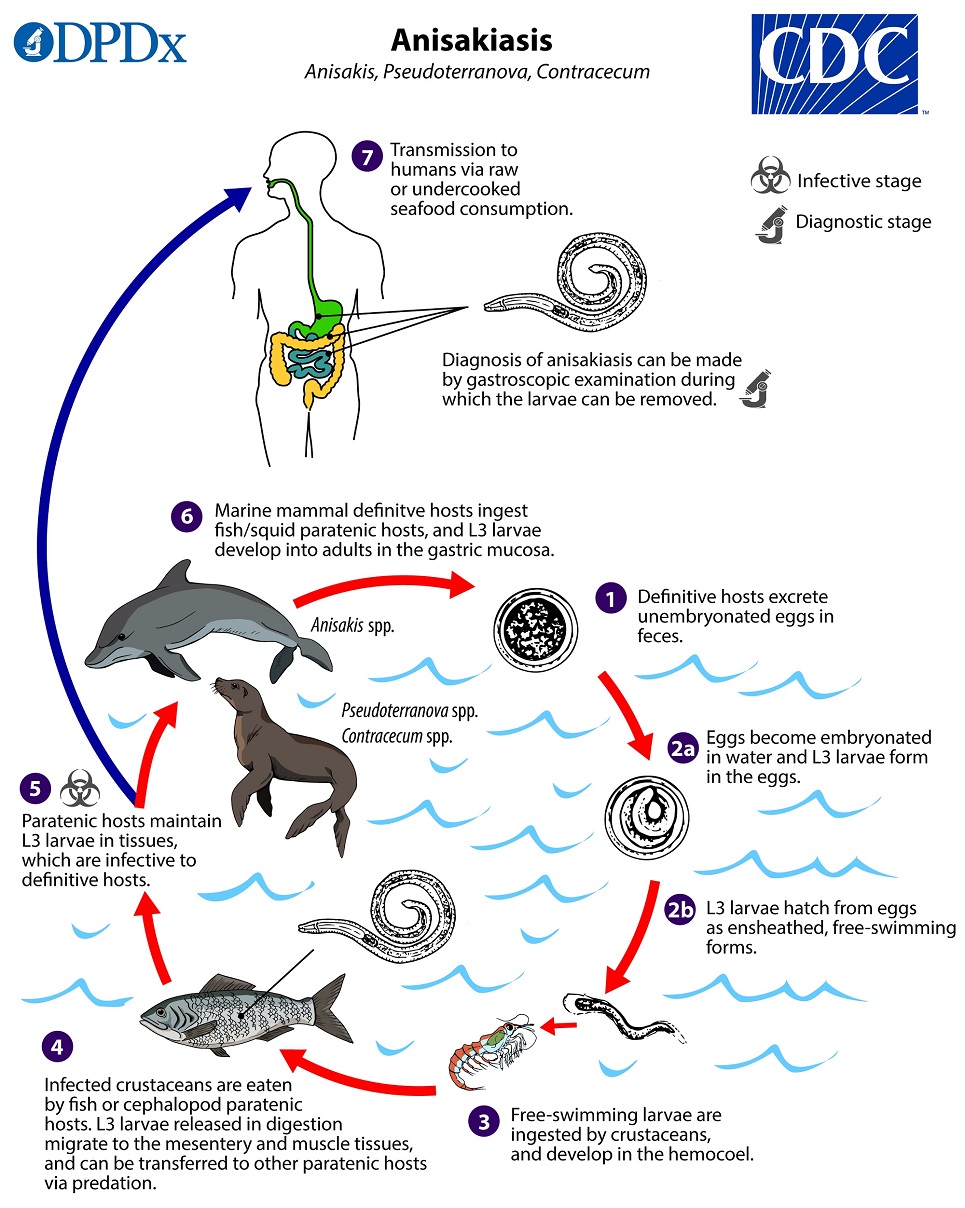 Adult stages of anisakid nematodes reside in the stomach of marine mammals, where they are embedded in the mucosa in clusters. Unembryonated eggs produced by adult females are passed in the feces of marine mammals

, and hatch from the eggs as free-swimming ensheathed third-stage (L3) larvae

. These free-swimming larvae are then ingested by crustaceans

. The ingested larvae grow within the crustacean hemocoel, and become infective to fish and cephalopod paratenic hosts. After preying upon infected crustaceans, the digested L3 larvae migrate from the paratenic host intestine into the abdominal cavity, and eventually to the tissues of the mesenteries and skeletal muscle. Through predation, tissue-stage L3 larvae can be transmitted among paratenic hosts

. Fish and squid maintain L3 larvae that are infective to humans and marine mammals

When fish or squid containing third-stage larvae are ingested by definitive host marine mammals, the larvae molt twice and develop into adult worms

. After ingestion by humans, the anisakid larvae penetrate the gastric and intestinal mucosa, causing the symptoms of anisakiasis

Definitive hosts include several cetacean species for Anisakis simplex sensu lato, and pinnipeds for Pseudoterranova decipiens sensu lato. The bearded seal (Erignathus barbatus) and gray seal (Halichoerus grypus) are known definitive hosts for Contracecum osculatum complex. Human-infecting anisakid species are found in a wide variety of marine fish intermediate and paratenic hosts, but are most common in predatory species such as herring, cod, mackerel, and sculpin.

Anisakiasis occurs worldwide due to the global trade of seafood, though the causative agents vary in geographic occurrence in their natural hosts. Anisakis simplex complex members occur in broadly both deep sea and coastal environments in the Atlantic Basin, Pacific Ocean, and Alaskan coast (A. simplex sensu stricto); A. pegreffii occurs in the Southern hemisphere. The Pseudoterranova decipiens complex is generally more geographically restricted than Anisakis spp., occurring in cold-water coastal environments such as the Northern Atlantic, the Arctic and South (Antarctic) Oceans, Japan, and off the southern coast of Chile. Contracecum osculatum complex species also occur in these colder regions.

Incidence of human infections is highest in areas where raw fish dishes (e.g. sashimi, ceviche, pickled/marinated fish) are popular. It is particularly common in Japan, the Pacific coast of South America, and parts of Northern Europe.

Anisakiasis involves acute abdominal symptoms, usually within hours after ingestion of larvae. This nonspecific abdominal distress can be mistaken for other conditions such as peptic ulcers, food poisoning, and appendicitis. Occasionally, the larvae are coughed up. If the larvae pass into the bowel, a severe eosinophilic granulomatous response may also occur 1 to 2 weeks following infection, causing symptoms mimicking Crohn’s disease, and rarely, intestinal perforation can occur. Rare cases of ectopic infection are known, in sites such as the peritoneal cavity, mesentery, esophagus, and tongue.

Most infections are self-limiting as larvae are unable to survive for long periods in the human host, but the associated tissue damage can cause longer lasting symptoms. Antigens that remain in the fish muscle after the larvae are killed (e.g. after freezing) can cause allergic reactions in some individuals.

Marine mammals such as cetaceans (whales, dolphins) and pinnipeds (seals, sea lions, walruses) serve as the definitive host for anisakid worms; humans are only incidental hosts after L3 larvae are consumed in undercooked fish (an intermediate host). 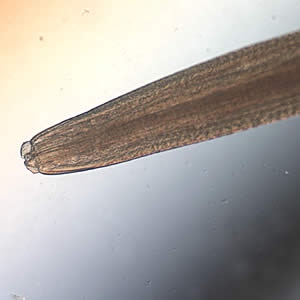 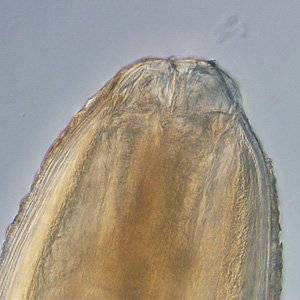 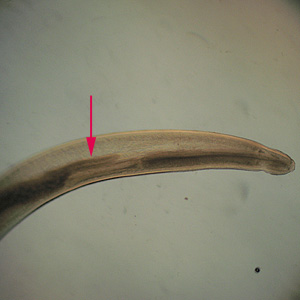 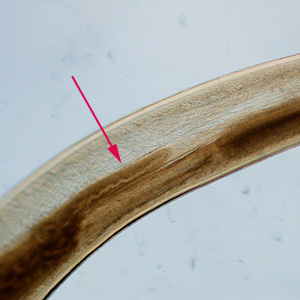 Figure D: Close-up of the intestinal cecum in the same specimen seen in Figure C 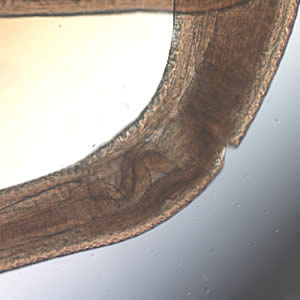 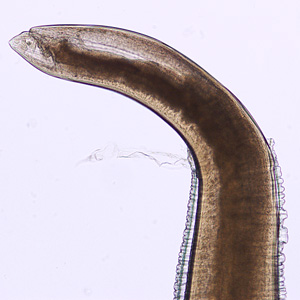 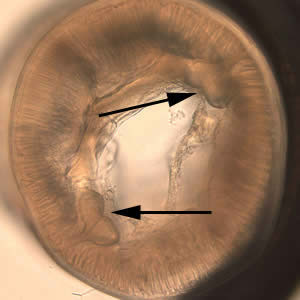 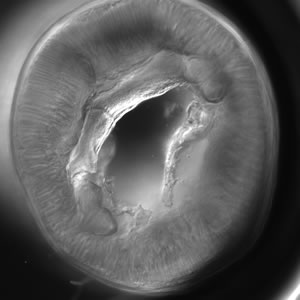 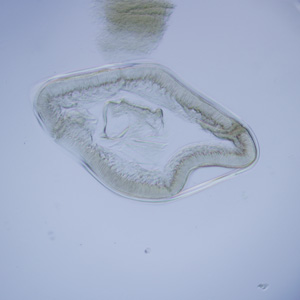 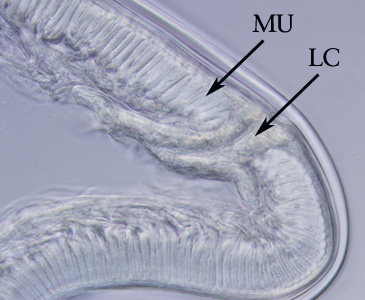 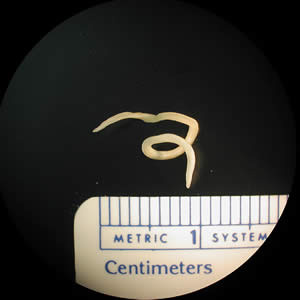 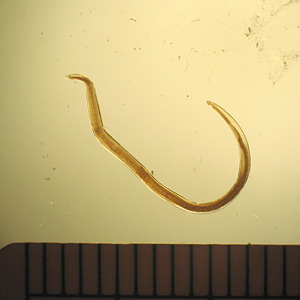 Figure B: L3 larva of an anisakid worm.
Anisakid worms in tissue specimens, stained with hematoxylin and eosin (H&E). 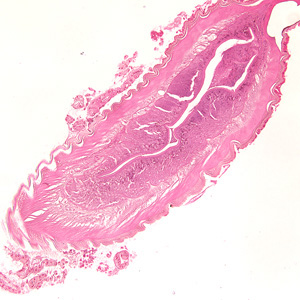 Figure A: Larva of an anisakid worm from a gastric biopsy specimen, stained with H&E. Image taken at 100x magnification. 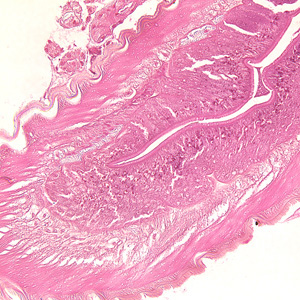 Figure B: Higher magnification (200x) of the specimen in Figure A, showing a close-up of the thick, multi-layered cuticle and tall, prominent muscle cells. 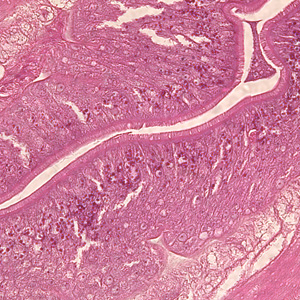 Figure C: Higher magnification (400x) of the specimen in Figures A and B, showing a close-up of the folded intestine with a brush border.

Diagnosis can be made by gastroscopic examination during which the larvae are visualized and removed, or by histopathologic examination of tissue removed at biopsy or during surgery. Worms may be coughed up and brought in by patients.

Genus-level identification is not required for patient management but may be accomplished by examination of digestive structures and lateral chords. Examination of esophageal and intestinal morphology usually requires clearing in lactophenol.

Standard laboratory protocols for the examination of histological sections and/or worm specimens apply.