Anatrichosoma is a genus of poorly understood tissue-dwelling nematodes that very rarely infect humans. They are generally associated with wild primate, rodent, and marsupial hosts, and share some morphologic similarities with other trichuroids such as Trichuris and Capillaria. Zoonotic infections have so far never been unequivocally identified to species level. 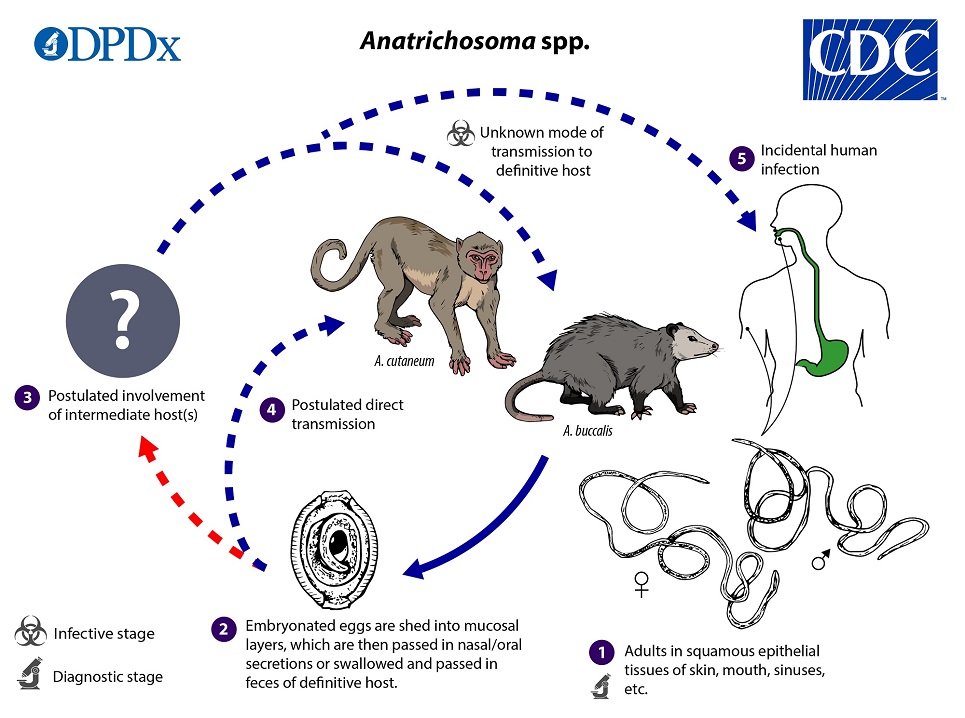 The complete life cycle of Anatrichosoma spp. is unknown. The long, slender adults are found in tunnels in mucosal and squamous epithelial tissues of definitive hosts such as primates and marsupials

; the particular anatomic site (e.g. skin, nasal/sinus cavity, mouth) is dependent on parasite species and males may be found in deeper layers of tissue than females. After copulation, the gravid females release embryonated eggs into the surrounding tissue, which are shed in mucosal secretions or eventually swallowed and shed in feces

. From that point, it is not known whether Anatrichosoma spp. follow an indirect cycle with intermediate host(s)

or a direct cycle without additional hosts

. Larval stages beyond what is present in eggs have not been identified, and experimental infections of potential intermediate hosts (e.g. beetles, cockroaches) have never succeeded.

The transmission route to humans is not known

. In one instance, two patients had skin exposure to snails but it is not known if snails play a role in the Anatrichosoma life cycle.

Several Anatrichosoma spp. (A. cutaneum, A. cynomolgi, A. nacepobi, A. rhina) have been described from subcutaneous tissues of various Old World primates. Non-primate associated species include A. ocularis of common tree shrews (Tupaia glis), A. gerbilis of North African gerbils (Gerbillus campestris), A. haycocki of dasyurid marsupials, and A. buccalis of opossums (Didelphis virginiana). Aberrant infections may infrequently occur in humans, and occasionally occur in domestic dogs and cats.

Anatrichosoma spp. have been found in a variety of locations in wildlife hosts but their broader occurrence is poorly understood. Zoonotic cases have been reported from Japan, Vietnam, Malaysia, Italy, and in a few patients from the United States with recent travel to Mexico.

In the few known human cases, clinical manifestations have involved the development of cutaneous or mucosal lesions caused by the presence of adult worms. Inflammatory tracks resembling cutaneous larva migrans/creeping eruption on the limbs, nodule formation, and ulceration of the oral mucosa have been described.

Anatrichosoma spp. are long and slender (both sexes up to ~30 mm long; females ~0.7 mm and males ~0.25 mm maximum width). Among nematodes, this group is unusual in that the male may be as long as the female, but is always more slender. Males also lack spicules and an ejaculatory duct. Eggs are barrel-shaped with two polar plugs and a coarsely striated shell, and are embryonated when passed. 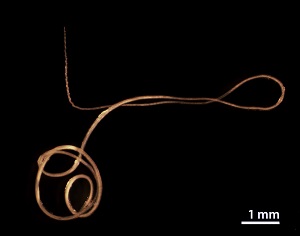 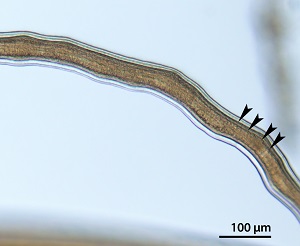 Figure B: Anterior region of the specimen shown in figure A. Numerous stichocytes (darts) are present, similar to related genera such as Trichuris and Capillaria. 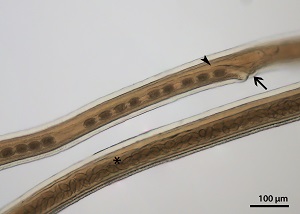 Most human cases of anatrichosomiasis have been identified via histological sections. In addition to the typical trichuroid stichosome, characteristic features include the minute size, paired bacillary bands, a single uterine tube, and embryonated eggs in utero and in surrounding tissue. 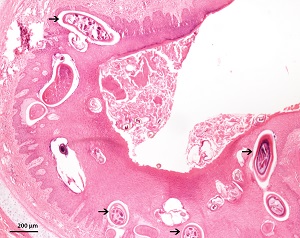 Figure A: Cross sections of Anatrichosoma sp. (presumed A. buccalis) females in buccal tissue from an opossum, H&E stained. Sections through many anatomical levels are visible, including the gravid uterus with eggs. Figure B: Closer view of the female shown in Figure A. Note the single uterine tube (bottom, arrow) with developing eggs, and the minute intestinal tube (top, dart). 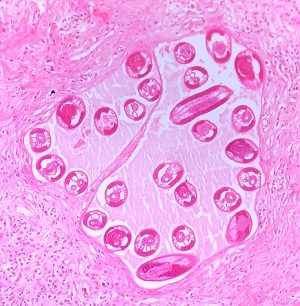 Figure C: Cross-sections of a coiled Anatrichosoma sp. in the subcutaneous tissues of a Patas monkey (Erythrocebus patas). 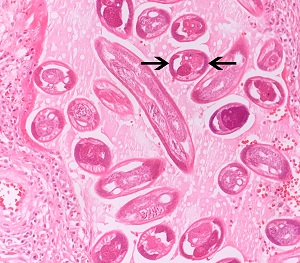 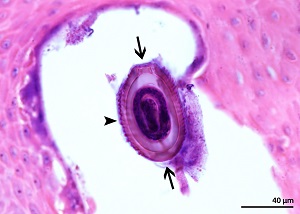 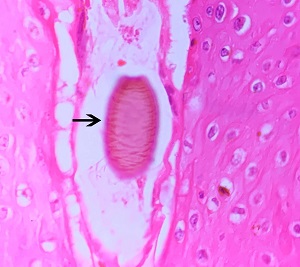 Diagnosis depends on the identification of adult Anatrichosoma spp. and eggs in tissue. Though this group possesses some distinct features visible in histological sections, it must be carefully distinguished from other nematodes that are morphologically similar (e.g. Trichuris, Capillaria) or that may appear in similar subcutaneous sites (e.g. Gongylonema, Dirofilaria). Molecular identification may be attempted on tissue specimens although this has not yet been successful in clinical cases.

Standard precautions apply for the processing of tissue specimens.