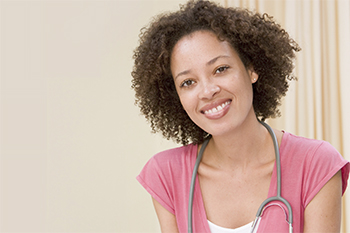 Who is at high risk for early-onset breast cancer?

According to the American Cancer Society (ACS), women who are at high risk for early-onset breast cancer include those who—

*Risk is higher with more than one affected first-degree relative and if the affected relative was diagnosed at a young age.

What are the current genetic counseling and testing guidelines for women at high risk for breast cancer?

The ACS recommends genetic testing for women at high risk, as defined above, to look for mutations in the BRCA1 and BRCA2 genes (or less commonly in other genes such as PTEN or TP53). Although testing can be helpful in some situations, providers need to weigh the pros and cons with the patient. The ACS strongly recommends that women first talk to a genetic counselor, nurse, or doctor who is qualified to explain and interpret the results of these tests.

The U.S. Preventive Services Task Force (USPSTF) recommends that women who have one or more family members with a known potentially harmful mutation in the BRCA1 or BRCA2 genes should be offered genetic counseling and testing. Women with an identified increased risk should be referred to a genetic counselor, who can further evaluate the risk based on family history, discuss the pros and cons of testing, and arrange for BRCA testing if the patient is ready to proceed.

Identifying individuals at increased risk for developing a hereditary cancer is the critical first step in the process of reducing the incidence of some cancers. Health care providers can use the following risk assessment tools, decision aids, and resources to identify and manage their patients who may be at high risk for hereditary breast and ovarian cancer. Providers can also use the tools to increase their understanding of the risk factors that put women at high genetic risk for breast and ovarian cancer.