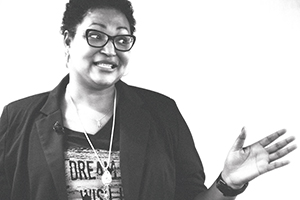 Carletta found the strength to beat breast cancer by mapping out her own strategy. Listen to her story, and be inspired to take control of your breast health.

This program is presented by the Centers for Disease Control and Prevention.

[Announcer] What was the moment in time when things changed for you? What motivated you to move forward or take action? Welcome to My Motivated Moment, a podcast featuring young women bravely facing a breast cancer diagnosis or risk of breast cancer, and the people in their lives who support them. In these live recordings, you’ll hear all about the moment everything changed for them. And how their experiences inspired them to become empowered advocates for their own health.

In this episode, we meet Carletta—who, at only 41, learned she had breast cancer. As she began her treatments, Carletta found she had a hard time getting motivated for the road ahead. But she found the strength she needed to reach her goals, beating the disease by mapping out her own strategy. Join us as Carletta reveals what it took for her to survive breast cancer.

[Carletta] I realize that not everybody gets excited about growing a year older, but I love celebrating birthdays. I treat birthdays like New Year’s Eve, New Year’s Day. It’s a new slate, a new beginning, a hope to be better than the year before. Milestone birthdays are especially important. As I approached my 40th birthday, I thought of it as I would be wiser. In my 20s and 30s I had fallen and stumbled; I always managed to get back up. But my 40s were to be redemptive. In fact, when I turned 40 I posted on my Facebook page, “I’m not 40. I’m 18 with 22 years of experience.”

My 40s started off with a bang. I had a party with friends and family and spent the most magnificent week on the beach in Punta Cana. Yeah, I was really digging my 40s. One way that I thought to separate my wise 40s from my 30s was to set goals that frightened me. Top of the list? Complete a triathlon. Yeah, what was I thinking? Me, the non-swimmer; me, the person who had not ridden a bike since I was a teenager in my small hometown of Cadiz, Kentucky; me, who thought it was really only necessary to run if you were being chased.

But then my friend Marcy signed up for a triathlon and I jumped at the chance to have an accountability partner and someone with whom I could share the experience. She went out and hired a coach. I bought a book, Triathlon Training for Dummies, and we set out to train. I wrote out my plan day-by-day, week-by-week, how I would prepare myself to become a triathlete that summer. I didn’t need to be perfect. I just needed to be able to swim 400 yards in open water, ride a bike for 13 miles, and run for 3.2. I had no aspiration to be first, didn’t care if I was last. I just wanted to complete the race.

In the middle of my aspirations, life happened. My father got sick. He was very sick. It was Stage 4 cancer. Unfortunately, cancer is not a stranger to my family, but this was different. It was my father. My father was a man of few words, but he fought strong and courageously. Unfortunately, he passed away only a few weeks after being diagnosed. In the midst of my grief, I didn’t want to complete a triathlon anymore. I ditched the training plan, bailed on my goal, THE goal that was to set my 40s apart from my 30s.

Months later, I decided that maybe I should try to triathlon again. I resumed my swimming, biking, and trotting, because what I do is not running, and told my swim coach, “This time I would do it. I would complete the triathlon and cross the finish line.” In the middle of my aspirations, life happened again. One day I was sitting at my desk. I got a phone call from my doctor. “Hello, Carletta, this is Dr. Burns. We got the results back from your biopsy. You have a little cancer.” A little cancer? You can’t have a little cancer, just like you can’t be a little pregnant. More importantly, I’m thinking, this is not the way doctors deliver bad news on television. I needed my news to be delivered to me in the comforting way it was done on television with plenty of hand-holding and lots of reassurances. But no, I get this call in the middle of my workday with no hand to hold and a solemn, “You have a little cancer.”

At the age of 41, in March 2013, I was diagnosed with breast cancer. It really is surreal when you get that news. It took me a while to realize that this was now my story, not my father’s or grandparents’ or uncles’ or cousins’, but cancer had come to personally invade my life. Because of my family history, I decided to have a double mastectomy. The day after my double mastectomy, the same doctor that told me “I had a little cancer” came into the hospital room to tell me that it had spread to my lymph nodes and that I would have to undergo chemotherapy.

I was crushed. I felt like I was back at day one and I desperately needed to be at the end of all of this. I had to undergo 16 rounds of chemo. One way that I sought to kind of boost my spirits and the spirits of others in the infusion center was to wear a different t-shirt to chemo every session. I thought it’d be a good distraction for all of us, a fun distraction. Sometimes the t-shirts were spiritually uplifting, like the one that said ,”God’s ‘can’ is bigger than cancer’s ‘can’.” Sometimes they were simply stated, like the t-shirt that said, “Determined.” Sometimes they were funny shirts, like the one that said, “Heck yeah, they’re fake. The real ones tried to kill me.”

But the t-shirts… the t-shirts were a big hit in the doctor’s office. But when I arrived at the doctor’s office for my fourth treatment, I was not the upbeat Carletta that everybody was accustomed to seeing. I was overcome with emotion, already thinking about the side effects that would come after this fourth treatment. My first four treatments were very aggressive. So when the oncologist nurse, Gwen, sat next to me and she said, “How are you?” the floodgates opened. I had the ugly cry. I said, “I can’t do this. I can’t do this for 12 more treatments.” It was such an ugly cry that she had to pull the curtain so as not to disturb the other patients.

Then things just started to fall in place. There was this contest put on by Atlanta Triathlon Club called, “I Want to Be a Triathlete,” and you had to get votes. You had to go out and I bugged the heck out of friends and family. I got over 4,000 votes… I must bug people pretty well. But I won the contest and I was so excited. I was like, “Oh yes, I won.” But then I thought “Oh no, I have to do this now.”

So I had this community of people cheering for me. I didn’t want to let them down. I didn’t want to let myself down. So I worked really hard. The novice swimmer became a bona fide swimmer. The occasional bike rider became a real regular bike rider. I even used the clips that lock into the pedals. I failed more times than I could count, but I always got back up until I could get it. I found though that having something to focus on and shoot for gave me power over my circumstances. On August 2, 23 days prior to another birthday, and almost one year to the date of my first chemo session, I raised my hands, thanked God. As tears fell down my face, I crossed my first triathlon finish line.

I’ve since then expanded that dream. I’ve completed three more sprint triathlons, done three 30-mile breast cancer walks, and a multi-sport adventure biking and kayaking from Key Largo to Key West, 120 miles, over a three-day period; I’ve done that twice… two consecutive years. My thing is, I think that my story’s not much different from anybody else’s who faces life’s trials and tribulations. And somewhere from within, we find a strength that helps us to overcome. Cancer did not win and I still love birthdays. As a matter of fact, I just celebrated my 46th birthday. For most people that is not a milestone birthday, but for me, every birthday is a milestone. I’m still here, I’m still standing, I’m still dreaming and planning. And for all of us, here’s to the dreams we can accomplish when we least expect we can. And my t-shirt today says, “Dream it, wish it, do it!” Thank you.

[Announcer] Focusing on her light at the end of the tunnel really helped Carletta through a tough time. She formed her plan and stayed focused. She didn’t just want to survive—she wanted to live and thrive. And she is doing just that, despite how hard some things are along the way.

We hope that stories like this help empower you to ‘Bring Your Brave’ and share your story. And don’t forget to talk to your family to learn more about your own genetic risk for breast cancer. Join the conversation at cdc.gov/bringyourbrave or bringyourbrave.tumblr.com to join the breast cancer conversation.

This episode was brought to you by Bring Your Brave from the Centers for Disease Control and Prevention. Take care of yourselves. And thanks for tuning in.

For the most accurate health information, visit cdc.gov, or call 1-800-CDC-INFO.