In the United States, over 440 clinics provide services to patients seeking to overcome infertility. CDC collects the data from all fertility clinics in the United States and calculates standardized success rates for each clinic. This gives a potential ART user an idea of their average chances of success. While ART relieves the burden of infertility for many couples, it presents significant public health challenges due to the substantial risk for multiple birth delivery, which is associated with poor maternal and infant health outcomes. For this reason, it is important to monitor the safety and effectiveness of ART procedures in the United States.

How Do We Monitor Assisted Reproductive Technology?

According to the Fertility Clinic Success Rate and Certification Actexternal icon, all ART cycles performed in United States fertility clinics are reported to CDC. National ART Surveillance System (NASS) is supported by the Division of Reproductive Health, National Center for Chronic Disease Prevention and Health Promotion, Centers for Disease Control and Prevention, U.S. Department of Health and Human Servicesexternal icon, under contract, currently with Westat, Inc. NASS is the only CDC-approved data reporting system for ART procedures. CDC (through contract with Westat, Inc) and the Society for Assisted Reproductive Technology (SART) maintain a list of all ART clinics known to be in operation and tracks clinic reorganizations and closings. NASS data include— 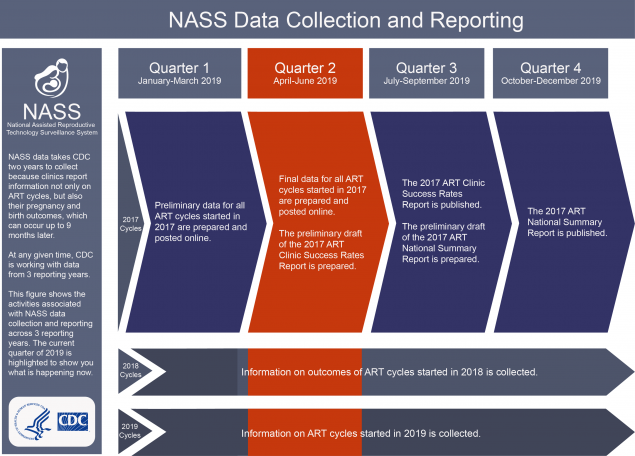 When drawing conclusions from NASS data, it is important to consider that data are cycle-specific, and data from women who undergo multiple cycles in one year are unlinked. Each year, a small number of clinics do not report data to CDC, and are listed as non-reporters in the ART Report. Because most non-reporting clinics are small, we estimate that NASS contains information about more than 95% of all ART cycles in the United States.

In addition to providing consumers with information about national and clinic-specific pregnancy success rates, national ART surveillance allows for the assessment of infant outcomes (birth weight, plurality, maturity), and the monitoring of trends in ART use in the United States.

ART surveillance data are protected under 308(d) Assurance of Confidentiality. Because of this Assurance, all data files are considered confidential materials and are safeguarded to the greatest extent possible.

ART clinics that are submitting data to CDC via the National ART Surveillance System (NASS) reporting system or through an approved alternative will be considered to be in compliance with federal reporting requirements of the FCSRCA. CDC’s NASS is a Web-based ART data reporting system. Clinics either electronically enter or import data into NASS for each ART procedure they start in a given reporting year. SART-member clinics may report their data to NASS through SARTexternal icon.

Representatives of a new clinic preparing to submit ART data or an existing clinic with data submission questions, can contact NASS Help Desk by calling 1-888-650-0822.

How Do We Ensure Data Accuracy?

Clinics are required to verify all reported data. CDC conducts data validation through yearly audits and site visits. To have their success rates published in this annual report, clinics’ medical directors must verify by signature that the tabulated success rates are accurate. The submitted data are then reviewed, and clinics are contacted if corrections are necessary.

After the data have been verified, a quality control process called validation begins. Every year, a sample of reporting clinics is selected for data validation. Members of the validation team visit selected clinics and review medical record data for a sample of the clinic’s ART cycles. For each cycle, the validation team compares information abstracted from the patient’s medical record with the data submitted for the report. Validation primarily helps ensure that clinics are being careful to submit accurate data. It also serves to identify any systematic problems that could cause data collection to be inconsistent or incomplete.

What Improvements Does NASS 2.0 Bring?

In 2016, an updated version of the National ART Surveillance System, NASS 2.0, opened. ART data collection required a number of improvements to continue accurately reporting on ART practices and outcomes. These needs stemmed from rapid changes in the field of ART, where new treatment methods and approaches are quickly adapted.  Examples of changes made to the surveillance system include changes to variables, definitions, and reporting requirements (especially prospective reporting), improved functionality that allows users to link information on oocyte retrievals and embryo transfers, and improved security and a streamlined user interface. CDC made changes to ART data collection in collaboration with many stakeholders, from professional societies, such as the American Society for Reproductive Medicine (ASRM), the Society for Assisted Reproductive Technology (SART), and the American Urological Association (AUA), and to consumer organizations, such as RESOLVE—the National Infertility Association, and Path2Parenthood.

Because NASS only contains limited pregnancy outcome information, CDC initiated a collaborative project to link ART surveillance data with other surveillance systems and registries that contain more detailed information on women and infants. In collaboration with the health departments of Connecticut, Massachusetts, Michigan, and Florida, NASS data are being linked to vital records, hospital discharge data, birth defects registries, cancer registries, and other surveillance systems of these states. This project, the States Monitoring ART (SMART) Collaborative, provides a unique opportunity to establish state-based patient-focused (versus cycle-focused) public health surveillance of ART, infertility and related issues.

1978—The first IVF birth in the world was reported in England.

1981—The first IVF birth in the United States was reported.

1986—The Society for Assisted Reproductive Technologyexternal icon (SART) was established in the early 1980’s, and began to collect data from its member clinics in 1986.

1992—The Federal Trade Commission intervened in a case of false advertising by a fertility clinic. As a result, the Fertility Clinic Success Rate and Certification Act of 1992 FCSRCA), Section 2(a) of P.L. 102–493 (42 U.S.C. 263a-1(a)) was passed, which mandated that CDC collect information yearly about ART cycles performed at clinics in the United States.

2002—CDC published the first ART Surveillance Summary in the Morbidity and Mortality Weekly Report (MMWR), which reports ART use and outcomes by state.

2016—NASS 2.0 goes live, bringing a number of improvements to the system.

CDC partners include the American Society for Reproductive Medicineexternal icon (ASRM) and the Society for Assisted Reproductive Technologyexternal icon (SART), who are involved in framing the surveillance and research questions and in collecting and reporting data from member clinics. Other important partners who represent consumers of ART and infertility services include RESOLVEexternal icon, Path 2 Parenthoodexternal icon, and Livestrong Fertilityexternal icon. These organizations provide ongoing consultations about the ART Report and its use for public health communications and education.