Chickenpox and How to Protect Against It

Chickenpox, or varicella, is a very contagious disease caused by the varicella-zoster virus (VZV). It causes a blister-like rash, itching, tiredness, and fever. Chickenpox can be serious, especially in babies, adults, and people with weakened immune systems. It spreads easily from infected people to others who have never had chickenpox or never received the chickenpox vaccine. Chickenpox virus spreads in the air through coughing or sneezing. It can also be spread by touching or breathing in the virus particles that come from chickenpox blisters.

You can protect against chickenpox with safe, effective vaccination. 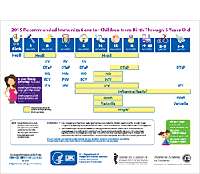 Common Side Effects of Chickenpox Vaccine

Serious side effects after the chickenpox vaccine are extremely rare. The few that have been reported after vaccination include severe rash, infections of the lungs or liver, meningitis, seizures, pneumonia, or general severe infection with the virus strain from the vaccine. Some children who had these serious side effects after vaccination had weakened immune systems before they were vaccinated, but they had not been diagnosed by a doctor at the time of vaccination.

People who get chickenpox vaccines can spread the vaccine-strain varicella-zoster-virus to others. However, this happens very rarely.

Pregnant women, people who are moderately or severely ill at the time the shot is scheduled, and people allergic to any vaccine component should not get chickenpox vaccine. For more information, see Contraindications and Precautions for Varicella Vaccination.

There are two chickenpox vaccines approved for use in the United States, one of which is combined with vaccines for other diseases:

CDC and FDA continuously monitor the safety of vaccines after they are approved.  If a problem is found with a vaccine, CDC and FDA will inform health officials, health care providers, and the public.

A Closer Look at the Chickenpox Vaccine Safety Data