Multiple Vaccinations at Once 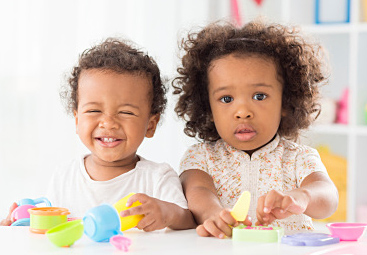 Vaccines are the best defense against infections that may have serious complications such as pneumonia, meningitis, cancer, and even death. CDC recommends vaccinations before the age of two years to protect children against 14 infectious diseases: measles, mumps, rubella (German measles), varicella (chickenpox), hepatitis A, hepatitis B, diphtheria, tetanus, pertussis (whooping cough), Haemophilus influenzae Type b (Hib), polio, influenza (flu), rotavirus, and pneumococcal disease.

Children are given shots (vaccines) at a young age because this is when they are at highest risk of getting sick or dying if they get these diseases. Newborn babies are immune to some diseases because they have antibodies they get from their mothers, usually before they are born. However, this immunity lasts a few months. Most babies do not get protective antibodies against diphtheria, whooping cough, polio, tetanus, hepatitis B, or Hib from their mothers. This is why it’s important to vaccinate a child before she or he is exposed to a disease.

Vaccines contain weakened or killed versions of the germs that cause a disease. These elements of vaccines, and other molecules and micro-organisms that stimulate the immune system, are called “antigens.” Babies are exposed to thousands of germs and other antigens in the environment from the time they are born. When a baby is born, his or her immune system is ready to respond to the many antigens in the environment and the selected antigens in vaccines.

Different childhood vaccines can be given at the same time.

First, children should be given their vaccines as quickly as possible to give them protection during the vulnerable early months of their lives. Second, giving several shots at the same time means fewer office visits. This saves parents time and money, and can be less traumatic for the child.

Getting multiple vaccines at the same time has been shown to be safe.

Scientific data show that getting several vaccines at the same time does not cause any chronic health problems. A number of studies have been done to look at the effects of giving various combinations of vaccines, and when every new vaccine is licensed, it has been tested along with the vaccines already recommended for a particular aged child. The recommended vaccines have been shown to be as effective in combination as they are individually.  Sometimes, certain combinations of vaccines given together can cause fever, and occasionally febrile seizures; these are temporary and do not cause any lasting damage. Based on this information, both the Advisory Committee on Immunization Practices and the American Academy of Pediatrics recommend getting all routine childhood vaccines on time.

CDC’s recommended childhood vaccine schedule ensures children get the best protection during the many different stages in growth and development.

From the moment babies are born, they are exposed to numerous bacteria and viruses on a daily basis. Eating food introduces new bacteria into the body; numerous bacteria live in the mouth and nose; and an infant places his or her hands or other objects in his or her mouth hundreds of times every hour, exposing the immune system to still more germs. When a child has a cold, he or she is exposed to up to 10 antigens, and exposure to “strep throat” is about 25 to 50 antigens. Each vaccine in the childhood vaccination schedule has between 1-69 antigens.  A child who receives all the recommended vaccines in the 2018 childhood immunization schedule may be exposed to up to 320 antigens through vaccination by the age of 2.

In fact, a 1994 report from the Institute of Medicine, Adverse Events Associated with Childhood Vaccinesexternal icon, states: “In the face of these normal events, it seems unlikely that the number of separate antigens contained in childhood vaccines …would represent an appreciable added burden on the immune system that would be immunosuppressive.”

DeStefano F, et al. Increasing exposure to antibody-stimulating proteins and polysaccharides in vaccines is not associated with risk of autismexternal icon. J Pediatr 2013; 163:561-567.