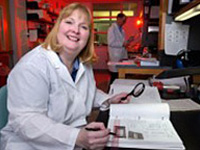 Christine J. Morrison, PhD, holds a great number of patents in CDC’s portfolio. In the photo, Dr. Morrison (with technician, Steve Hurst, in the background) is analyzing some of her laboratory data related to molecular probe diagnostics.

Vulvovaginal candidiasis, also known as VVC or a vaginal yeast infection, is a common condition of women worldwide with more than 75% of women experiencing an infection once in their lifetime and 40-45% having two infections or more. On rare occasions, men may also get genital candidiasis. VVC occurs more frequently and more severely in diabetics, pregnant women, and those with weakened immune systems.

Most candidiasis patients are infected with Candida albicans, but the number of non-Candida albicans infections has grown steadily in recent years. Importantly, yeast infections caused by some non-albicans species are resistant to the azole drugs typically prescribed for C. albicans infections, resulting in persistent and recurrent non-albicans yeast infections. The rise in Candida species infections and differences in effective therapeutic strategies highlight the need for a sensitive, rapid, and species-specific method to diagnose vulvovaginal candidiasis, and to guide appropriate treatment.

A CDC research team, headed by Dr. Christine J. Morrison, developed a unique set of primers and probes to detect the presence of and identify Candida species with high sensitivity and specificity. Real-time polymerase chain reaction (PCR) could then be performed to diagnose a Candida infection and distinguish among the different species. This breakthrough CDC technology was licensed to Quest Diagnostics, Inc., the largest U.S. provider of medical laboratory tests. Quest Diagnostics developed the SureSwab® Candidiasis test which uses a single swab to obtain a vulvovaginal specimen, followed by DNA extraction, real-time PCR amplification, and the identification of Candida species DNA sequences. This gynecological test provides women with a rapid and specific diagnosis of a vaginal yeast infection for the major Candida species to facilitate timely and appropriate treatment. When combined with other Quest Diagnostics’ technology in a panel, VVC infections are detected, while also ruling out other genital infections.