A comparison of the morbidity and mortality before and after widespread implementation of national vaccine recommendations for 13 vaccine-preventable diseases for which recommendations were in place prior to 2005. 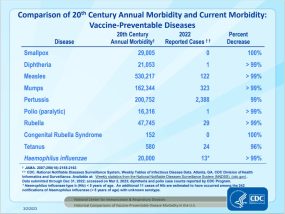 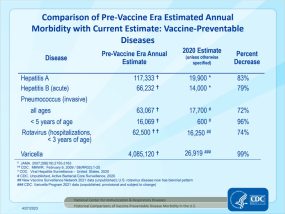 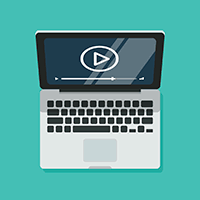 In cooperation with state health departments, the National Center for Immunization and Respiratory Diseases (NCIRD) coordinates national surveillance for 19 diseases and conditions in NNDSS, including vaccine-preventable diseases (VPDs) and other respiratory diseases and conditions. CDC is notified by state health departments of cases of diseases and conditions under national surveillance, as designated by the Council of State and Territorial Epidemiologists (CSTEexternal icon); these data are published by the Center for Surveillance, Epidemiology, and Laboratory Sciences (CSELS) in the Morbidity and Mortality Weekly Report (MMWR) and/or CDC WONDER. In general, NCIRD encourages state health departments to submit provisional data through NNDSS before completing case investigations; however, cases are included for publication as described in the NNDSS event code list (case status print criteria) approved by CSTE.

CDC publishes NNDSS data weekly in the MMWR and/or CDC WONDER, and yearly in the Annual Summary of Notifiable Diseases. NNDSS data, together with data collected through supplemental surveillance systems, are analyzed by NCIRD staff and are disseminated through surveillance reports, journal manuscripts, MMWR Surveillance Summaries, and other publications.

Manual for the Surveillance of Vaccine-Preventable Diseases

The Manual for the Surveillance of Vaccine-Preventable Diseases provides current guidelines for those directly involved in surveillance of VPDs, especially personnel at the local and state/territorial health departments. For each of the VPDs, the manual includes a chapter describing the importance of rapid case identification; the importance of surveillance; disease reduction goals; case definitions (including clinical description and case classifications); epidemiologically important data to be collected during case investigation; activities for enhancing surveillance; activities for case investigation; and activities for outbreak control. Other chapters include information on surveillance indicators; surveillance data analyses; enhancing surveillance; laboratory support for surveillance; and reporting adverse events following vaccination. In addition, the manual includes a section reserved for insertion of state-specific guidance for VPD surveillance, as well as extensive appendices.

The purpose of vaccine-preventable disease surveillance indicators in the United States is to ensure adequate performance of the essential components of surveillance and case investigation, and to identify components of each that need improvement. Surveillance indicators for selected vaccine-preventable diseases were proposed by CDC and approved by CSTE in 1994. Since then, the indicators have continued to evolve to maximize their usefulness. The CDC currently monitors indicators for measles, mumps, rubella, Haemophilus influenzae, pertussis, meningococcal disease, invasive pneumococcal disease and varicella on a regular basis.

Questions about the ELC R1 CoAg or requests for project documents should be directed to VPDsurvELC@cdc.gov.

The NNDSS Modernization Initiative (NMI) has been established to improve CDC surveillance efforts and to support the goals of the CDC Surveillance Strategy. NMI has three components: 1) development of new HL7 Message Mapping Guides (MMGs), 2) development of the CDC Message Validation, Processing, and Provisioning System (MVPS), and 3) provision of technical assistance (TA) to jurisdictions.

As part of the CDC Surveillance Strategy and NMI, NCIRD has developed a process to support harmonization of variables across the 19 conditions for which NCIRD provides subject matter expertise. NCIRD considers a harmonization process to include identification of overlapping and similar concepts across conditions, so that concepts are either standardized or a decision is made to retain the concept in a unique format. Each decision is documented.

OMB-PRA approval has been received for the data included in NNDSS. For details, see Federal Register OMB Package 0920-0728external icon.