This report is published as part of the NHIS Early Release Program. In May and December of each year, the Centers for Disease Control and Prevention’s National Center for Health Statistics (NCHS) releases selected estimates of telephone coverage for the civilian noninstitutionalized U.S. population based on data from NHIS, along with comparable estimates from NHIS for the previous 3 years. The estimates are based on in-person interviews. NHIS interviews are conducted continuously throughout the year to collect information on health status, health-related behaviors, and health care utilization. The survey also includes information about household telephones and whether anyone in the household has a wireless telephone (also known as a cellular telephone, cell phone, or mobile phone).

For many years, NHIS has included questions on residential telephone numbers to permit recontact of survey participants. Starting in 2003, additional questions determined whether the family’s telephone number was a landline telephone. All survey respondents were also asked whether “you or anyone in your family has a working cellular telephone.” A family can be an individual or a group of two or more related persons living together in the same housing unit. Thus, a family can consist of only one person, and more than one family can live in a household (including, for example, a household where there are multiple single-person families, as when unrelated roommates are living together).

From January through June 2008, household telephone status information was obtained for 16,070 households that included at least one civilian adult or child. These households included 30,150 civilian adults aged 18 years and over and 11,238 children less than 18 years of age. Analyses of demographic characteristics are based on data from the NHIS Family file. Demographic data for all civilian adults living in interviewed households were used in these analyses. Estimates stratified by poverty are based only on reported income. Household income was unknown for nearly 18% of adults.

Because NHIS is conducted throughout the year and the sample is designed to yield a nationally representative sample each week, data can be analyzed quarterly. Weights are created for each calendar quarter of the NHIS sample. NHIS data weighting procedures have been described in more detail in an NCHS published report (Series Report Number 2, Volume 130 pdf icon[PDF – 300 KB]). The estimates using the January-June 2008 data are being released prior to final data editing and final weighting to provide access to the most recent information from NHIS. The resulting estimates should be considered preliminary and may differ slightly from estimates using the final data files.

Point estimates and 95% confidence intervals were calculated using SUDAAN software to account for the complex sample design of NHIS. Differences between percentages were evaluated using two-sided significance tests at the 0.05 level. Terms such as “more likely” and “less likely” indicate a statistically significant difference. Lack of comments regarding the difference between any two estimates does not necessarily mean that the difference was tested and found to be not significant. Due to small sample sizes, estimates based on less than 1 year of data may have large variances, and caution should be used in interpreting these estimates.

In 2007, the questionnaire was changed so that all survey respondents were asked if there was “at least one phone inside your home that is currently working and is not a cell phone,” unless the respondent indicated not having any phone when asked for a telephone number.

Finally, in 2007, the questionnaire was redesigned to improve the collection of income information. Initial evaluations suggest that poverty estimates are generally comparable to years 2006 and earlier. However, as a result of the changes, the poverty ratio variable has fewer missing values in 2007 compared with prior years.

The percentage of U.S. civilian noninstitutionalized adults living in wireless-only households is shown by selected demographic characteristics and by survey time period in Table 2. For the period January through June 2008:

Most major survey research organizations, including NCHS, do not include wireless telephone numbers when conducting random-digit-dial telephone surveys. Therefore, the inability to reach households with only wireless telephones (or with no telephone service) has potential implications for results from health surveys, political polls, and other research conducted using random-digit-dial telephone surveys. Coverage bias may exist if there are differences between persons with and without landline telephones for the substantive variables of interest.

The NHIS Early Release program updates and releases estimates for 15 key adult health indicators every 3 months. Table 4 presents estimates by household telephone status (landline, wireless-only, or without any telephone service) for all but two of these measures. (“Pneumococcal vaccination” and “personal care needs” were not included because these indicators are limited to adults aged 65 years and over.) For the period January through June 2008:

For more information about the National Health Interview Survey or the Early Release program, or to find other Early Release reports, please see the following websites: 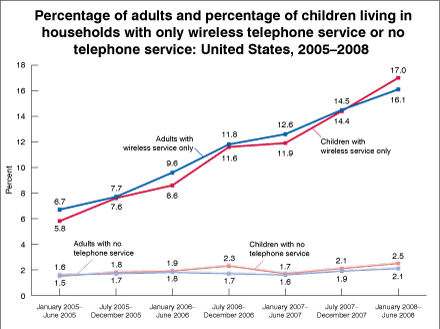