Violence as a Public Health Issue 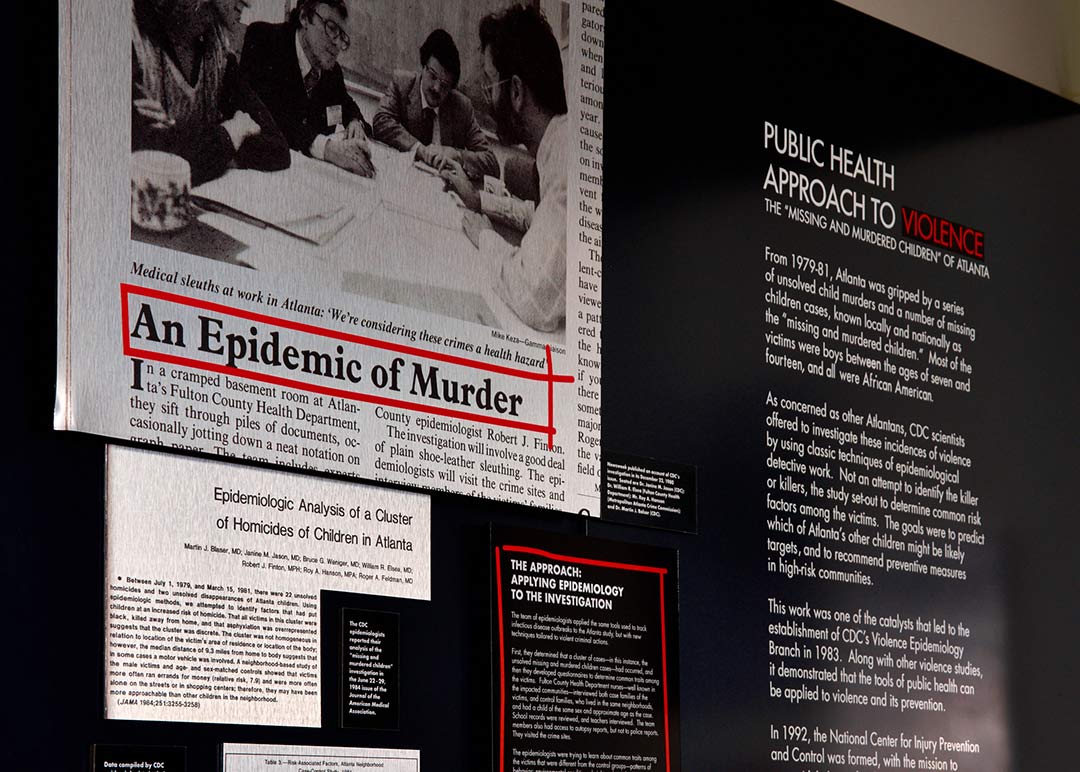 The Atlanta Missing and Murdered Children

Shown here is a photo of scientists working together around a desk and a map of the city of Atlanta, items that tell the story of CDC’s first project in violence prevention. From 1979-81, Atlanta was gripped by a series of unsolved child murderspdf icon and several missing children cases, known locally and nationally as the “missing and murdered children.” Most of the victims were boys between the ages of seven and fourteen, and all were African American. Each red dot on the map below represents the location where a body was found. 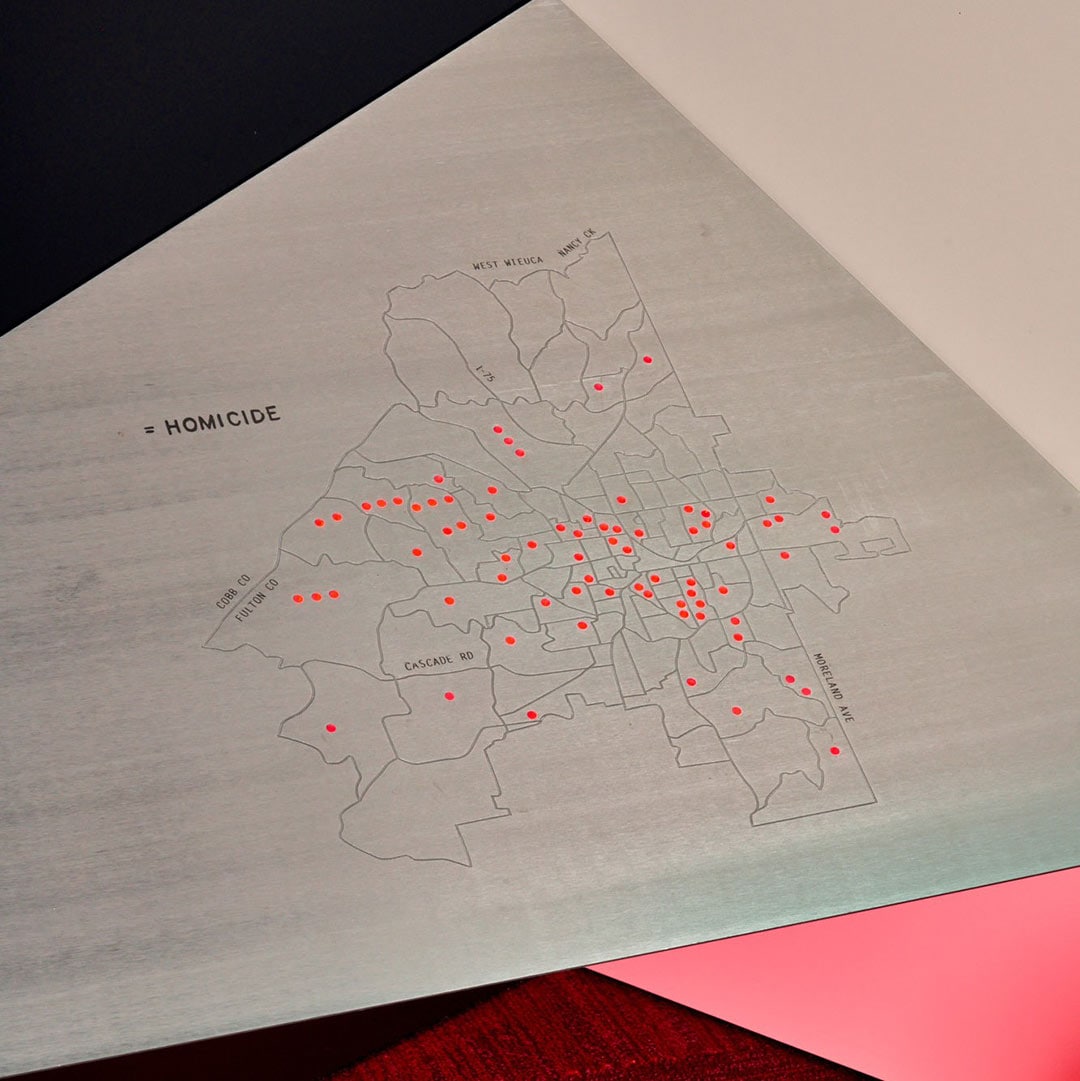 As concerned as other Atlantans, CDC scientists offered to investigate these incidences of violence by using classic techniques of epidemiological detective work. Not an attempt to identify the killer or killers, the study set out to determine common risk factors among the victims. The goals were to predict which of Atlanta’s other children might be likely targets, and to recommend preventive measures in high-risk communities.

The team of epidemiologists applied the same tools used to track infectious disease outbreaks to the Atlanta study, but with new techniques tailored to violent criminal actions. First, they determined that a cluster of cases—in this instance, the unsolved missing and murdered children cases—had occurred, and then they developed questionnaires to determine common traits among the victims. Fulton County Health Department nurses–well known in the impacted communities—interviewed both case families of the victims, and control families who lived in the same neighborhoods and had a child of the same sex and approximate age as the cases. School records were reviewed, and teachers interviewed. The team members also had access to autopsy reports, but not to police reports.

The epidemiologists were trying to learn about common traits among the victims that were different from the control groups—patterns of behavior; environmental conditions; height and weight – any detail that could help determine risk factors. At the end of the study, the epidemiologists determined that there were substantial differences in the case and control families. For example, the victims were more likely to be alone on the street or in a shopping center, especially during afternoon hours. They more often had a trusting attitude towards adults. They more frequently ran errands for money and had histories of running away from home or institutional settings. Therefore, the victims may have been more approachable than other children in the neighborhood.

The National Center for Injury Prevention and Control 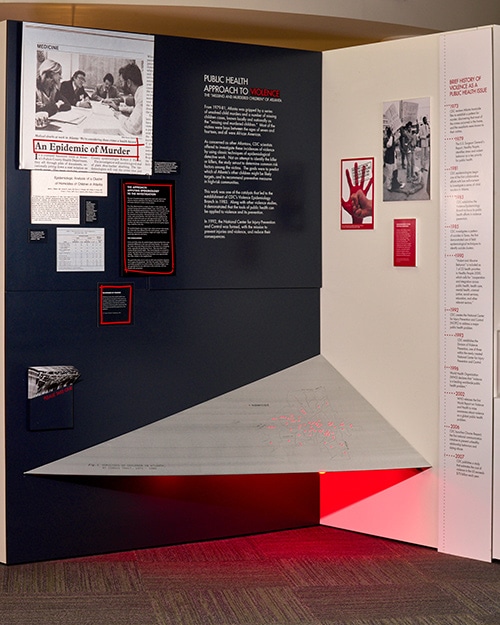 The goal of the study was to come up with some prevention measures, not to capture the perpetrator. But when the suspect Wayne Williams was arrested for two of the murders, the epidemiologists were not surprised that he was well-known in the community and was friendly with young boys. In March 1981, Atlanta citizens, joined by supporters from across the country, organized demonstrations to express public concern about the “missing and murdered children.” This immediate and emotional response to the crisis encouraged neighborhood coalitions—working with staff from law enforcement, education, and public health—to implement long-term violence-prevention strategies, such as the Neighborhood Watch programs.

This work was one of the catalysts that led to the establishment of CDC’s Violence Epidemiology Branch in 1983. Along with other violence studies, it demonstrated that the tools of public health can be applied to violence and its prevention. In 1992, the National Center for Injury Prevention and Control was formed, with the mission to prevent injuries and violence, and reduce their consequences.