Be sure to join our live Newsletter Zoom on October 26, 2021, at 8pm, and check out all the activities (social media challenge and Ask a CDCer) at the end of each newsletter. Join in on the fun and win some prizes! 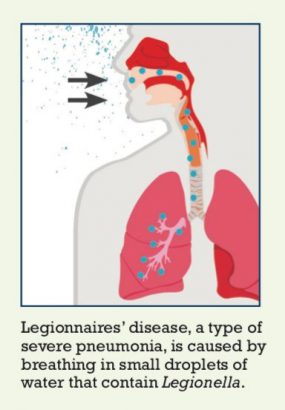 How Do Legionella Spread?
Legionella are usually spread through water droplets in the air. In nature, Legionella live in fresh water and rarely cause illness. In human-made settings, Legionella can grow if water is not properly maintained. These human-made water sources become a health problem when small droplets of water that contain the bacteria get into the air and people breathe them in. In rare cases, someone breathes in Legionella while drinking water, and it “goes down the wrong pipe” into the lungs. In general, people do not spread Legionnaires’ disease to other people. 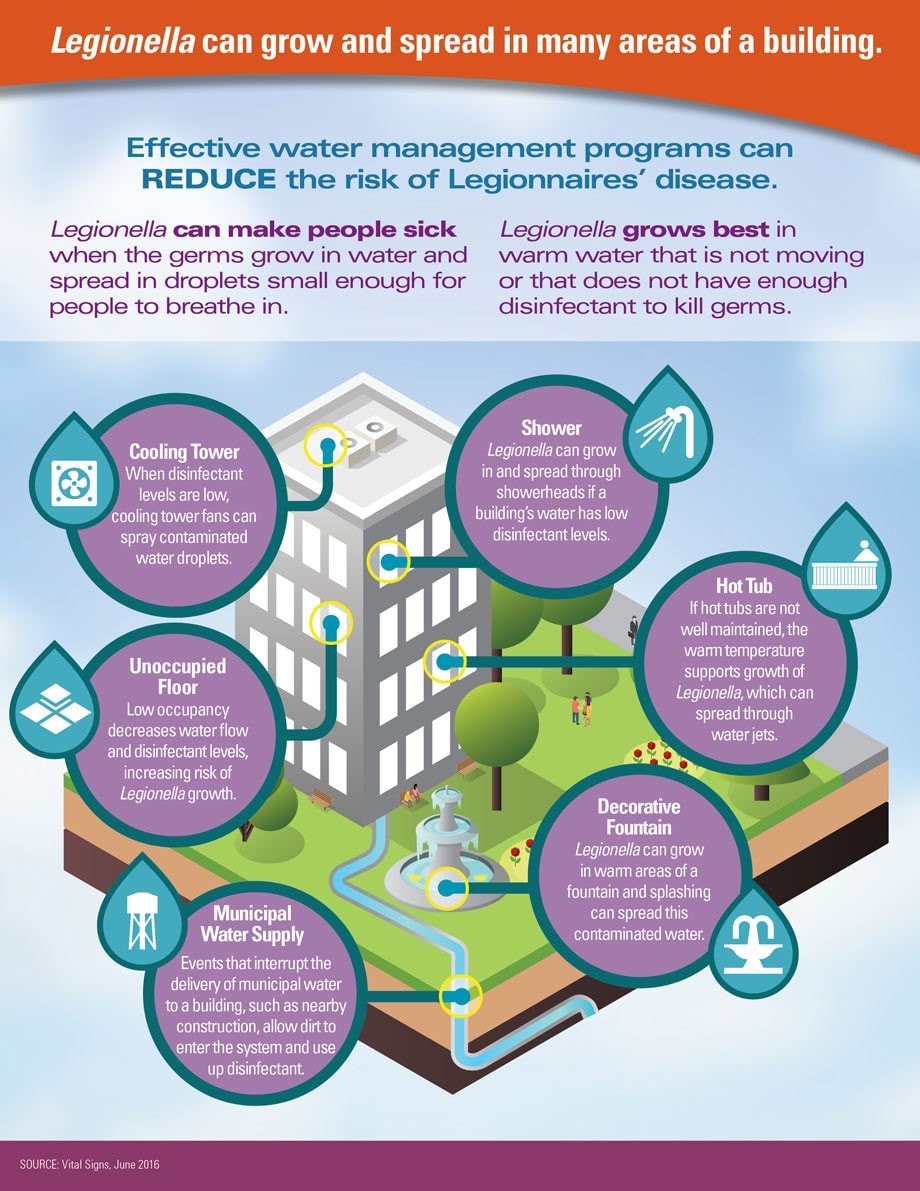 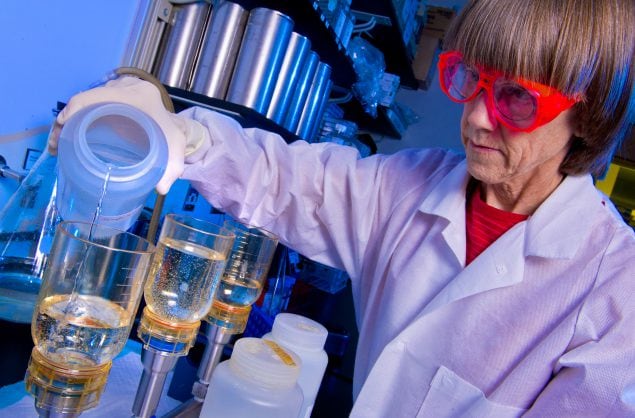 CDC’s National Center for Immunization and Respiratory Diseases, Division of Bacterial Diseases works to prevent and control illness and death from vaccine-preventable and other respiratory bacterial diseases (including Legionnaires’ disease) through excellence in epidemiologic and laboratory science. This office plays a critical role in outbreak response, epidemiology, laboratory diagnosis and pathogen characterization, vaccine development, and control of respiratory and vaccine-preventable diseases nationally and globally.

Legionellosis includes Legionnaires’ disease and other diseases caused by Legionella. It is now a nationally notifiable disease. Lab-confirmed cases of legionellosis are reported to state health departments, who then notify CDC. State or territorial public health officials typically invite CDC to assist with an investigation when they need additional expertise, capacity, or resources.

However, this was not always the case. This month’s newsletter looks at a historically significant outbreak of a new respiratory disease. Learn about the disease’s namesake, the pathogen that causes the illness, and the creation of surveillance systems used to monitor new cases.

1. Surveillance (What is the problem?)
In public health, we identify the problem by using surveillance systems to monitor health events and behaviors occurring among a population.

In 1976, CDC received a report of an outbreak of a mystery illness in Pennsylvania. Within a few weeks, 221 people across Pennsylvania were sick, and 34 had died from a severe respiratory illness. Media coverage was unprecedented for the agency, as this was the first mystery disease in the U.S. in recent memory.

The map below from the August 16, 1976 Newsweek magazine shows where cases, or ill people, and deaths of this mystery illness lived. 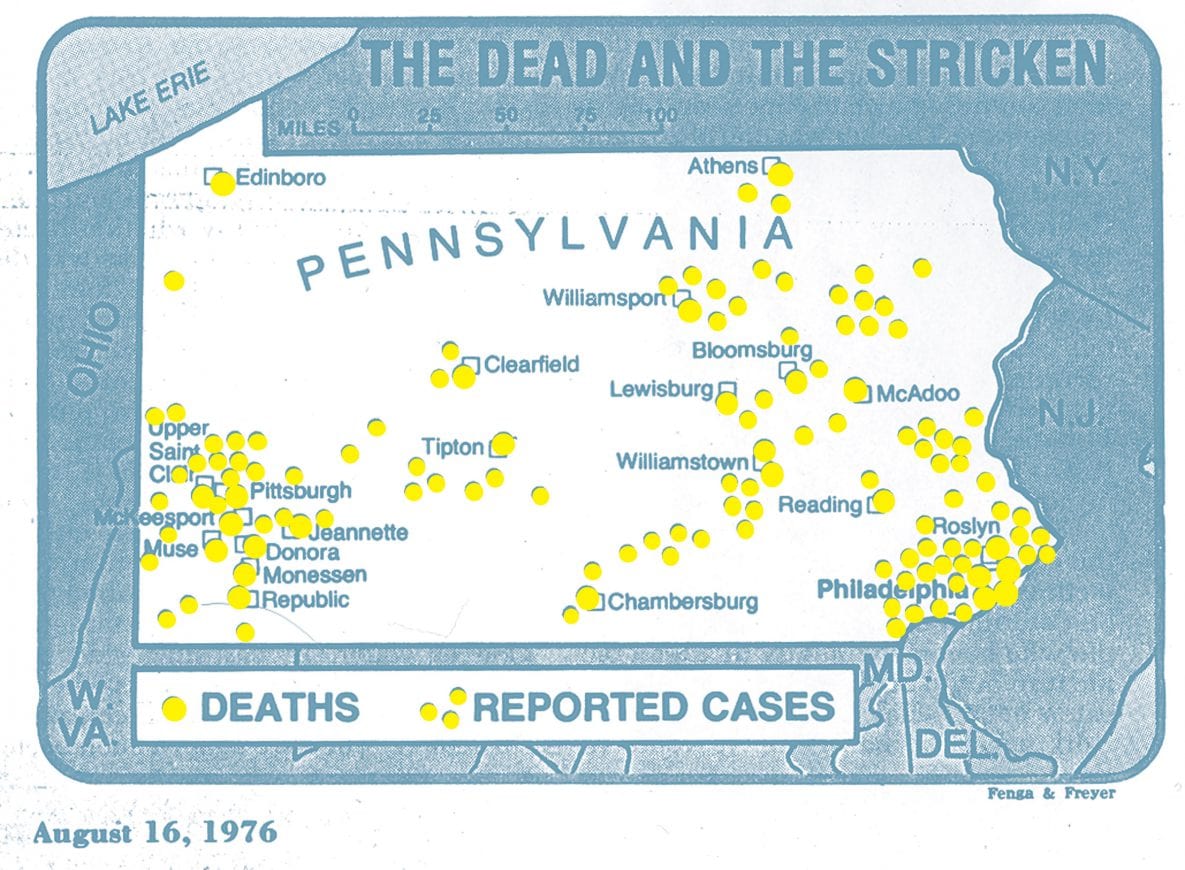 2. Risk Factor Identification (What is the cause?)
After we’ve identified the problem, the next question is, “What is the cause of the problem?” For example, are there factors that might make certain populations more susceptible to disease, such as something in the environment or certain behaviors that people are practicing?

The Pennsylvania State Health Department requested assistance from CDC, so a team of Epidemic Intelligence Service Officers was sent in to investigate. The team determined that most people affected by the mystery illness had attended the American Legion convention at the Bellevue-Stratford hotel, pictured below, in Philadelphia, Pennsylvania. While this was helpful information, the team continued to collect data to determine the specific source of the outbreak. They tested objects like a hat and pin that belonged to a conference attendee and cigarettes that were given to participants in their conference materials. The team also asked conference attendees questions that could help determine a common exposure, such as where each person slept and where they ate. They used maps of Pennsylvania, Philadelphia, and a Sanborn Fire Insurance map of the Bellevue-Stratford hotel to compare location similarities and differences between sick and non-affected people. After spending weeks collecting and reviewing data, the team suspected the pathogen was airborne, but extensive lab tests yielded no results. 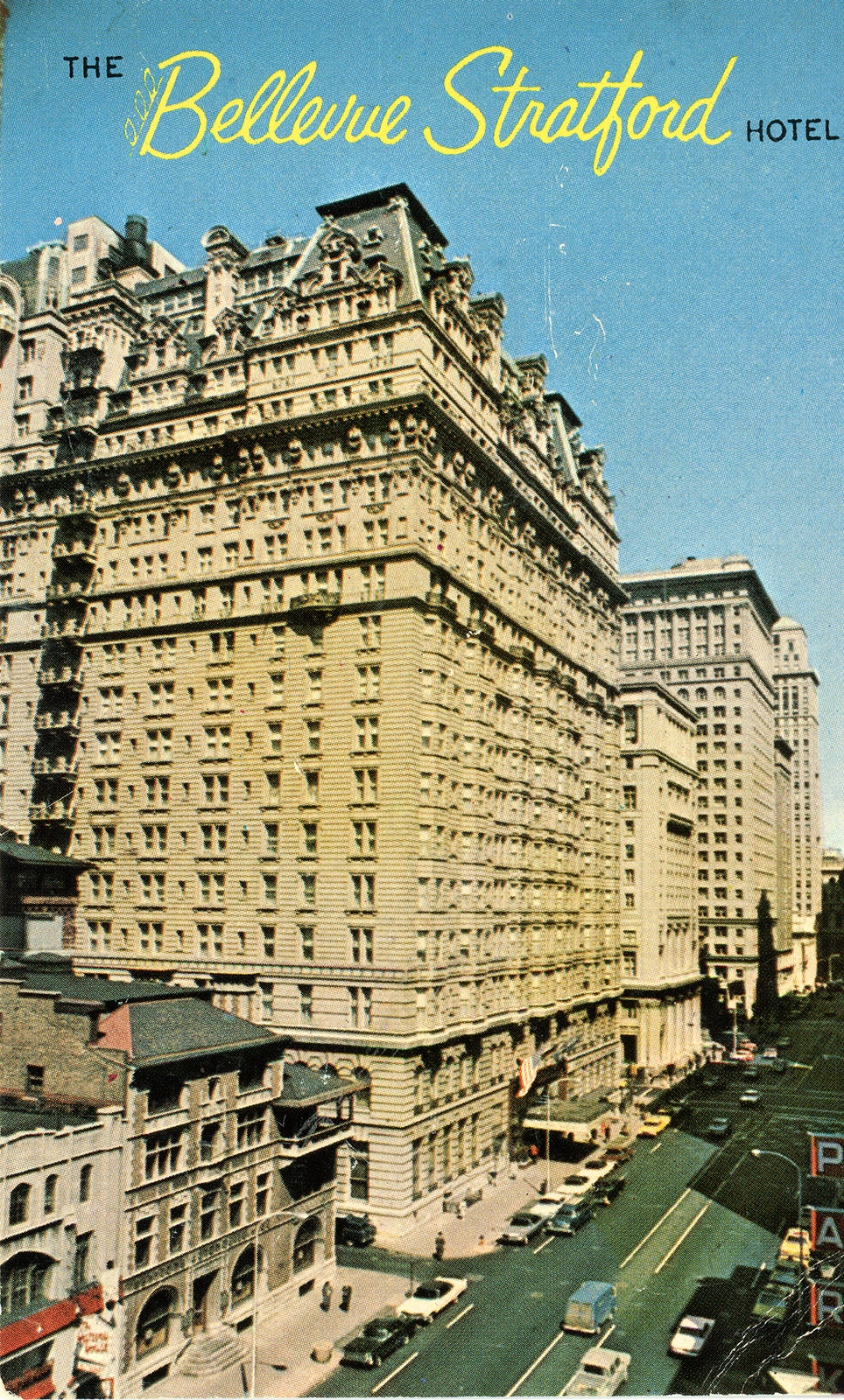 3. Intervention Evaluation (What works?) Once we’ve identified the risk factors related to the problem, we ask, “What intervention works to address the problem?” We look at what has worked in the past in addressing this same problem and if a proposed intervention makes sense with our affected population.

Months after the end of the investigation, a CDC microbiologist named Dr. Joseph McDade revisited the lab cultures and was able to isolate a new bacterium. He named it Legionella pneumophila, after the Legionnaires’ convention outbreak. 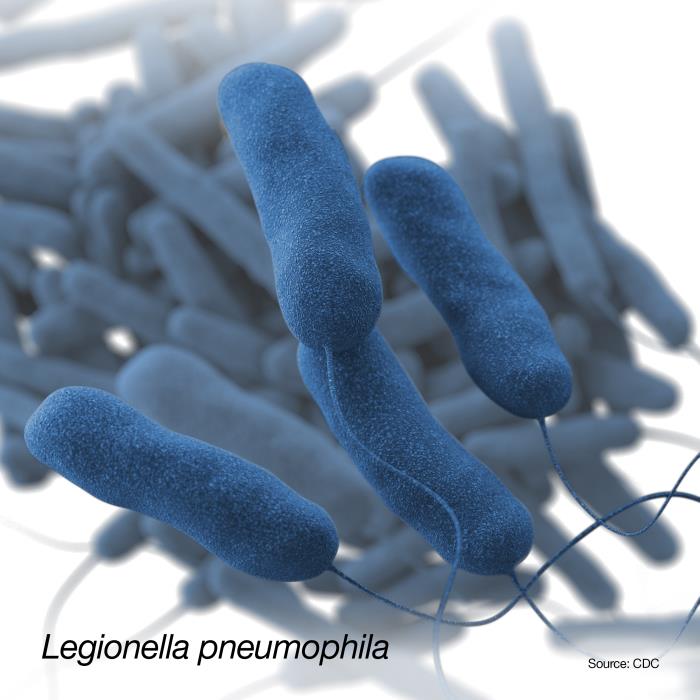 This illustration depicted a three-dimensional (3D), computer-generated image, of a group of Gram-negative, Legionella pneumophila, bacteria. The artistic recreation was based upon scanning electron microscopic (SEM) imagery.

This newly identified pathogen was suspected of contaminating the Bellevue Stratford’s air conditioning system. The CDC Museum exhibit on this outbreak displays a large glass jug, shown below, filled with chiller water taken from the Bellevue-Stratford Hotel’s cooling system during the outbreak investigation. Since 1976, air conditioning systems have changed and agencies around the world have stricter cleaning and hygiene standards for cooling towers and large-scale air-conditioning systems. The nationwide attention CDC received became the new norm for the agency, as the country began to see CDC as the leader in protecting the nation against potential new diseases or other health threats. 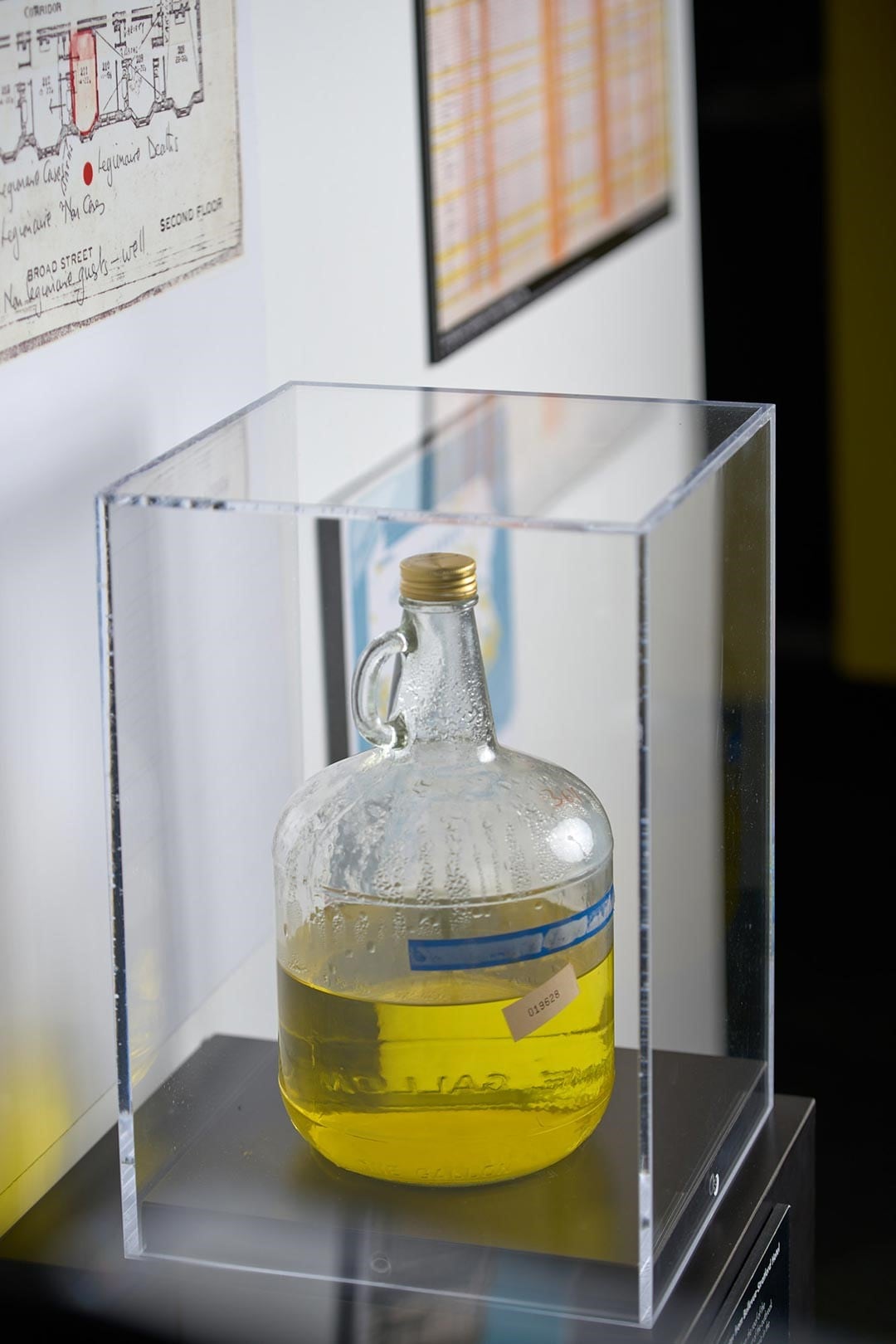 4. Implementation (How do we do it?) In the last step, we ask, “How can we implement the intervention? Given the resources we have and what we know about the affected population, will this work?”

Since this outbreak and the other outbreaks of Legionnaires’ that have followed, CDC has developed a variety of resources to provide information and tools for investigating outbreaks and developing water management programs. These resources include guidelines, fact sheets, videos, infographics, podcasts, public service announcements, toolkits, trainings, and more. Below are a few select materials for building owners and managers, state and local officials, and healthcare providers to help them implement the interventions described above. 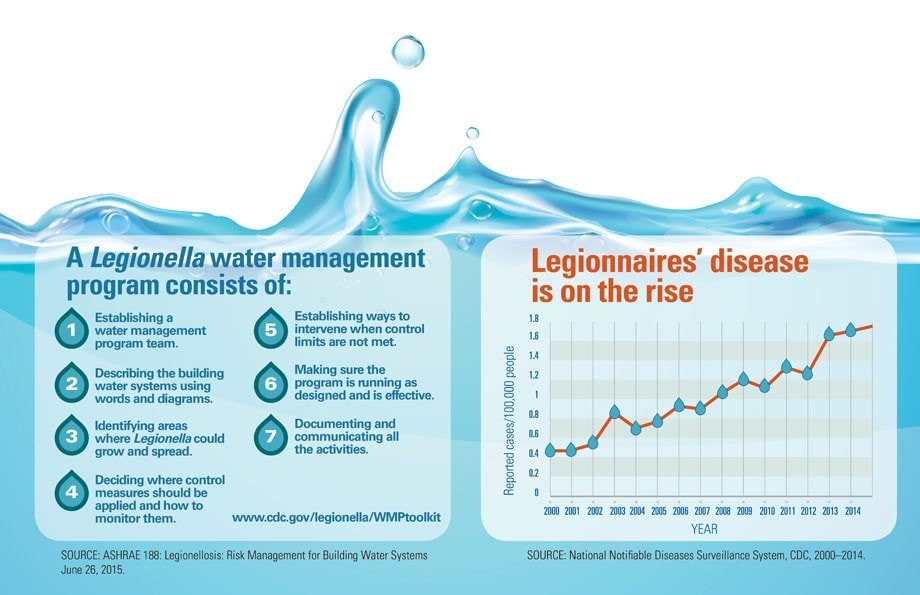 As you can see, using the Public Health Approach helps public health professionals identify a problem, find out what is causing it, and determine what solutions/interventions work. 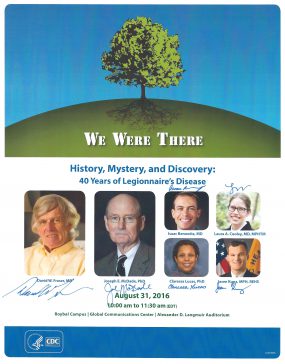 In 2016, forty years after the American Legion convention outbreak, CDC invited some of those original Disease Detectives to share their personal perspectives and first-hand accounts as part of its “We Were There” lecture series.

The 90-minute presentation, “History, Mystery, and Discovery: 40 Years of Legionnaires’ Disease,” begins with a 3-minute clip (at the 3:00-minute mark) that looks back at the outbreak in 1976 when CDC’s Disease Detectives first identified the pathogen that caused the deadly outbreak. The rest of the presentation features original investigators David Fraser, MD, and Joseph E. McDade, PhD sharing some of their experiences from the initial investigations; Isaac Benowitz, MD, discussing his part in solving the mystery of the 2015 Legionnaires’ disease outbreak in New York City; and Laura A. Cooley, MD, MPHTM, Claressa Lucas, PhD, and Jasen Kunz, MPH, REHS discussing more of Legionella’s 40-year history. All six speakers take part in a question and answer session at the end.

Out of the CDC Museum Collection – Legionnaires’ Disease

This month’s Out of CDC Museum Collection features an artifact that will be on display in an CDC Museum exhibition called CDC at 75. This Legionella air sampling trunk kit, which consists of a large trunk containing equipment, was created in 1988 by CDC scientists. The kit was used to take samples from the air. At that time, CDC labs were some of the only labs in the world able to test for Legionnaires’, as little was known about how the disease spread. This sampling kit was used to determine that particulate drift from water cooling towers could easily affect areas more than two miles away. As time went on and technology evolved, various pieces of equipment were added to the trunk to help scientists collect air samples. The trunk was in use until 1998, when new technology made the trunk obsolete.

All October 2021 Teen Newsletter winners will be announced 10/26/21 during the Zoom – see individual deadlines below, as applicable.

You have several chances to win! Participate in any three of the activities below for a chance to win a prize. Complete all three to qualify for the Future CDCer prize!

Want to learn more from CDCers who work on Legionnaires’ disease?

Advance registration required. All who register by 11pm on 10/25/21 will be entered into a prize drawing, but you can register on the day of the Zoom as well!

Help us spread the word about the #teennewsletter!

Encourage your followers to sign up for the CDC Museum Teen Newsletter using this link: https://tinyurl.com/cdcm-teenexternal icon

Do you have a question for a CDCer who works on Legionnaires’ disease?

Submit your question by 11pm ET on 10/25/21 for the Legionnaires’ disease experts who will be joining the Zoom.