Since 2013, law enforcement encounters (drug submitted for analysis) testing positive for fentanyl reported by laboratories participating in NFLISi has sharply increased in a growing number of states. A 2015 CDC Health Alert and 2016 MMWR documented states with high or increasing numbers of fentanyl encounters also reported increases in fentanyl-involved overdose deaths. Recent investigations in Ohio and Florida provide strong evidence of an association between reported fentanyl encounters and fentanyl-involved overdose deaths due to illicitly-made fentanyl.

Most of the increases in fentanyl deaths over the last three years do not involve prescription fentanyl but are related to illicitly-made fentanyl that is being mixed with or sold as heroin—with or without the users’ knowledge[i] and increasing as counterfeit pills.[ii] In July 2016, the Drug Enforcement Administration (DEA) issued a new nationwide report indicating hundreds of thousands of counterfeit prescription pills have been entering the U.S. drug market since 2014, some containing deadly amounts of fentanyl and fentanyl analogs.[ii] The current fentanyl crisis continues to expand in size and scope across the United States. 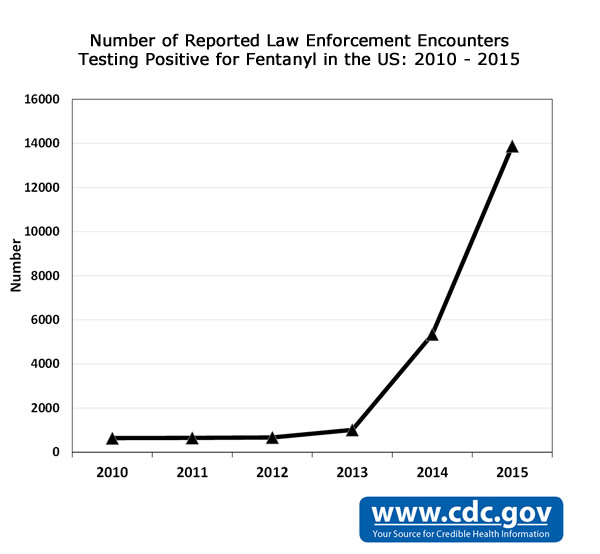 *This graph uses data from the DEA National Forensic Laboratory Information System (NFLIS)external icon on the number of law enforcement drug submissions that test positive for fentanyl from 2014 to 2015 as of July 1, 2016.

Limitations: The analysis has the following limitations: