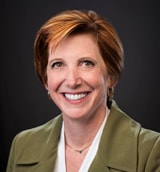 Nancy Messonnier, MD, is the Director of the National Center for Immunization and Respiratory Diseases (NCIRD). Since beginning her public health career in 1995 as an Epidemic Intelligence Service Officer in the Deputy Director for Infectious Diseases (DDID), Dr. Messonnier has held a number of leadership posts across CDC and within NCIRD. She served as Deputy Director of NCIRD from October 2014-March 2016, and led the Meningitis and Vaccine Preventable Diseases Branch in NCIRD’s Division of Bacterial Diseases from 2007-2012.

Dr. Messonnier has provided critical leadership to CDC’s cross-cutting laboratory, global health, and surveillance initiatives. She has been a champion for prevention and control of bacterial meningitis in the United States—from drafting the initial recommendations for meningococcal polysaccharide vaccine use in those heading for college, to the introduction of meningococcal conjugate vaccines for routine use in teens. She also oversaw a family of studies exploring resurgence of pertussis in the United States and characterizing post-licensure effectiveness of acellular pertussis vaccines. She played a pivotal role in the successful public-private partnership to develop and implement a low cost vaccine to prevent epidemic meningococcal meningitis in Africa. More than 150 million people in the African Meningitis Belt have been vaccinated with MenAfriVac since 2010, with remarkable impact. Dr. Messonnier also has been a leader in CDC’s preparedness and response to anthrax, including during the 2001 intentional anthrax release and in evaluating simplified schedules for use of licensed anthrax vaccine.

Dr. Messonnier has written more than 140 articles and chapters and has received numerous awards. In 2011, she received NCIRD’s Philip Horne Award for unparalleled scientific contributions, exceptional mentorship, and staff development and in 2009 she received the Federal Executive Board’s Excellence in Action Outstanding Team award for the Anthrax Vaccine Research Program.