Vibrio are gram-negative bacteria that are naturally found in warm, salty marine environments, such as salt water and brackish water.

Brackish water is a mix of fresh water and salt water, such as where the river meets the sea.

More than 20 Vibrio species can cause the human illness vibriosis. 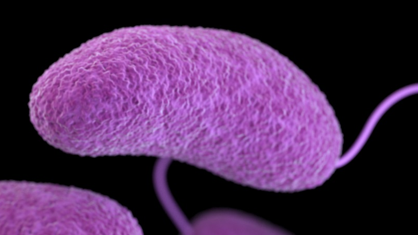 An estimated 80,000 cases of vibriosis, 500 hospitalizations, and 100 deaths occur in the United States each year, with most not confirmed by culture.

Vibriosis should be considered if a patient has watery diarrhea and has recently eaten raw or undercooked seafood, especially oysters, or when a wound infection occurs after exposure to seawater. Infection is diagnosed when Vibrio bacteria are found in the stool, wound, or blood of a patient who has symptoms of vibriosis.

Management of mild cases of vibriosis

Treatment is not necessary in mild cases, but patients should drink plenty of liquids to replace fluids lost through diarrhea. Antibiotics can be lifesaving in severe illnesses.

V. vulnificus should be considered as a possible cause of infected wounds that were exposed to coastal waters. Treatment should be initiated promptly because antibiotics improve survival. Careful attention should be given to the wound site; aggressive debridement or amputation of the infected limb is sometimes necessary.

Most people with mild illness recover after about 3 days and suffer no long-term consequences.

However, people with V. vulnificus infection can get seriously ill and sometimes need intensive care or limb amputation. About 1 in 5 people with this type of infection die, sometimes within a day or two of becoming ill.

Most people with vibriosis develop it after eating raw or undercooked shellfish, particularly oysters. Others develop it after a wound or soft tissue is exposed to salt water, brackish water, raw seafood, or juice or drippings from raw seafood. Although infections occur throughout the year, about 80% occur from May through October when water temperatures are warmer.

Anyone can get vibriosis. People more likely to get an infection or serious complications:

Vibrio bacteria can be detected by culture-independent diagnostic testing (CIDT) or isolated by culture from a clinical specimen. If a culture is performed, CDC recommends the use of selective media, such as thiosulfate citrate bile-salts (TCBS) agar, for examining stool specimens if Vibrio illness is considered possible.

CDC recommends culture confirmation of CIDT positive specimens, when possible, because specific performance characteristics (such as sensitivity, specificity, and positive predictive value) of CIDTs are currently unknown and CIDTs do not differentiate between non-cholera Vibrio – which is necessary to decide on treatment and follow-up.