Public health investigators are using the national Cholera and other Vibrio Infections Surveillance (COVIS) system Cdc-pdf[PDF – 4 pages] to collect food histories. Food histories have been reported for 82 ill persons. Of these, 75 (91%) reported eating raw oysters or raw clams during the 7 days before their illness began.

State health departments work with regulatory partners to trace the source of the shellfish. These efforts have determined that raw oysters and clams consumed by Ill persons originated from shellfish harvest areas in Connecticut, Massachusetts, New York, and Virginia.

Illnesses are still being reported, but have decreased since the warmest months. It is unlikely that all harvest areas associated with illnesses have been identified. It is likely that many illnesses have occurred that were not detected through surveillance because some people do not seek medical care, diagnostic testing is not always performed, and some laboratories do not routinely use the specific culture plate necessary to test for Vibrio bacteria. The investigation is ongoing. 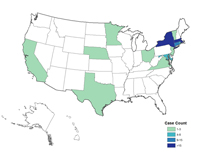