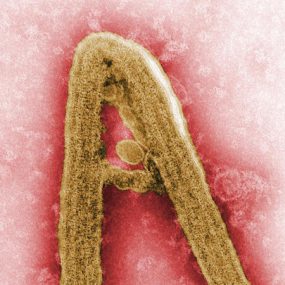 Viruses in the family Filoviridae can cause severe hemorrhagic fever in people and nonhuman primates (such as monkeys and gorillas) and may spread in other animals, such as bats. Filoviruses are enveloped in a lipid (fatty) membrane and appear in several shapes. Each virion (complete, infective form of a virus) contains one molecule of single-stranded, negative-sense RNA.

In 1967, Marburg virus, the first discovered filovirus, was recognized when laboratory workers in Marburg, Germany and Yugoslavia developed hemorrhagic fever after handling tissues from green monkeys. The virus disappeared until 1975, when it emerged in South Africa in a traveler to Zimbabwe, and quickly spread to the traveler’s companion and a nurse caring for him. Since then, Marburg has emerged sporadically, including two large epidemics in Democratic Republic of Congo (DRC) from 1998-2000 and Angola from 2004-2005.

Ebola virus disease was first identified in 1976 when two consecutive outbreaks of fatal hemorrhagic fever occurred in different parts of Central Africa. The first outbreak occurred in DRC in a village near the Ebola River, giving the virus its name. The second outbreak occurred in what is now South Sudan, approximately 500 miles (850 km) away. Since then, six different species of ebolavirus have been discovered, four of which are known to cause disease in people.

How viruses in the Filovirus family spread

Filoviruses are zoonotic, meaning they are transmitted from animals to people. The reservoir host of Marburg virus is the African fruit bat, but further study is needed to determine if other species may also serve as hosts. Scientists have not determined the host for Ebola virus, although bats are likely involved and may be the reservoir.

Factors like population growth, encroachment into forested areas, and direct interaction with wildlife (such as bushmeat consumption) may contribute to the introduction of filoviruses into human populations. Once a person is infected, filoviruses can spread from person-to-person through direct contact with an infected person’s body fluids. Those at highest risk of infection are caretakers and healthcare providers who do not use appropriate personal protective equipment (PPE).