What is Rift Valley Fever? 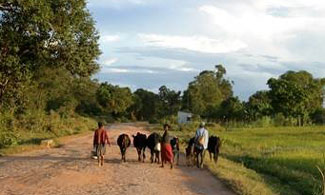 Rift Valley fever (RVF) is an acute viral hemorrhagic fever that is most commonly seen in domesticated animals (such as cattle, buffalo, sheep, goats, and camels) and can also cause illness in people. The disease is caused by RVF virus (RVFV), a member of the genus Phlebovirus in the order Bunyavirales. Some related Bunyavirales viruses can also cause illness in people, such as hantaviruses and Crimean-Congo hemorrhagic fever (CCHF) virus.

RVF was first reported in livestock by veterinary officers in Kenya’s Rift Valley in the early 1910s. It is generally found in regions of eastern and southern Africa where sheep and cattle are raised, but exists in most of sub-Saharan Africa, including West Africa and Madagascar. In September 2000, an outbreak of RVF was reported in Saudi Arabia. It was then also found in Yemen. These were the first cases of Rift Valley fever identified outside of Africa.

Outbreaks of RVF can have major societal impacts, including significant economic losses and trade reductions. The disease most commonly affects livestock, causing severe illness and abortion in domesticated animals, an important income source for many. Outbreaks of disease in animal populations are called “epizootics.” The most notable RVF epizootic occurred in Kenya in 1950-1951, resulting in the death of an estimated 100,000 sheep.

Epizootic outbreaks of RVF also increase the likelihood of contact between diseased animals and humans, which can lead to outbreaks of RVF in people. For instance, in 1977 RVF was found in Egypt (possibly imported from infected domestic animals from Sudan) and caused a large outbreak among both animals and people that resulted in over 600 human deaths. Another example occurred in West Africa in 1987 and was linked to construction of the Senegal River Project. The project caused flooding in the lower Senegal River area, which changed both ecological conditions and interactions between animals and people, resulting in a large RVF outbreak in both animals and humans.