Shingrix (recombinant zoster vaccine) should be administered to adults age 50 years and older as a two-dose series (0.5 ml each), 2 to 6 months apart (0, 2-6 months).

If more than 6 months have elapsed since the first dose of Shingrix, you should administer the second dose as soon as possible. However, you do not need to restart the vaccine series.

Prepare Shingrix by reconstituting the antigen component with the adjuvant suspension component. Either administer it immediately, or store it in the refrigerator and use it within 6 hours of reconstitution. Otherwise, discard it. 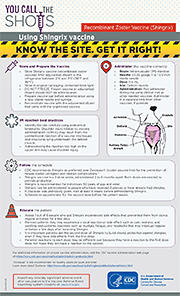 Shingrix should be injected intramuscularly in the deltoid region of the upper arm.  Subcutaneous injection is a vaccine administration error and should be avoided. However, if you inadvertently administer Shingrix subcutaneously, that dose is considered valid and does not need to be repeated. If a subcutaneous vaccine administration error occurs on the first dose of Shingrix, a second dose is still required after 2 – 6 months.

Shingrix should be administered immediately after reconstitution or stored in the refrigerator. Do not freeze Shingrix. Do not use if exposed to temperatures below 36⁰F.

Administration with Other Vaccines

CDC general recommendations advise that recombinant and adjuvanted vaccines, such as Shingrix, can be administered concomitantly, at different anatomic sites, with other adult vaccines. Concomitant administration of Shingrix with Fluarix Quadrivalent (influenza vaccine) (QIV) has been studied, and there was no evidence for interference in the immune response to either vaccine or safety concerns. Evaluation of co-administration of Shingrix with 23-valent pneumococcal polysaccharide vaccine (Pneumovax23) (PPSV23) and Tetanus Toxoid, Reduced Diphtheria Toxoid and Acellular Pertussis Vaccine, Adsorbed (Boostrix) is ongoing. The safety and efficacy of administration of two adjuvanted vaccines (e.g., Shingrix and adjuvanted influenza vaccine (Fluad), either concomitantly or at other intervals, have not been evaluated.

If you accidently administered Zostavax® (zoster vaccine live) to an adult when Shingrix was indicated, you may initiate the Shingrix series no less than eight weeks later.

If you accidently administered varicella vaccine to an adult when Shingrix was indicated, no specific safety concerns exist, but the dose should not be considered valid. You should administer a dose of Shingrix to the patient during that same visit. If the error is not immediately detected, you may initiate the Shingrix series no less than eight weeks later.

These events should be documented and procedures put in place to prevent this from happening again.

Recommendations of the Advisory Committee on Immunization Practices for Use of Herpes Zoster Vaccines, 2018.