More than 564,000 people died from overdoses involving any opioid, including prescription and illicit opioids, from 1999-2020.1

This rise in opioid overdose deaths can be outlined in three distinct waves.

Many opioid-involved overdose deaths also include other drugs.8,9 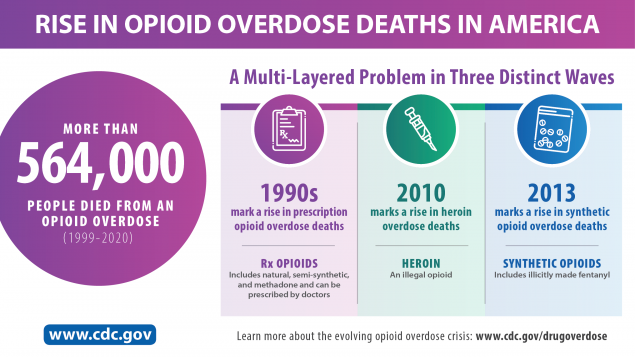 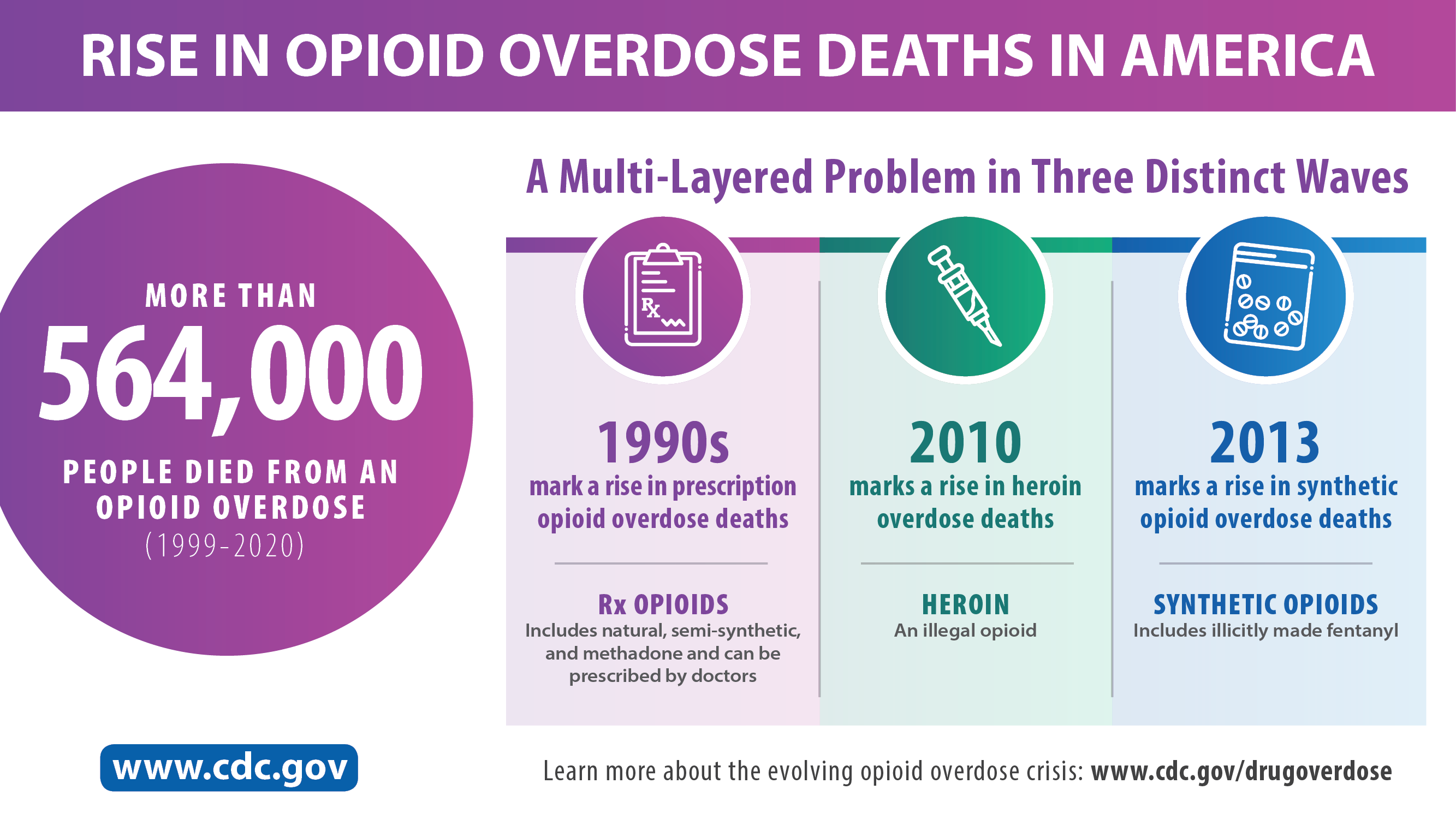 The graph below shows rates of overdose deaths associated with three categories of opioids, as well as all opioids overall. Rates of deaths involving natural and semi-synthetic opioids and methadone are combined in one category called Commonly Prescribed Opioids. 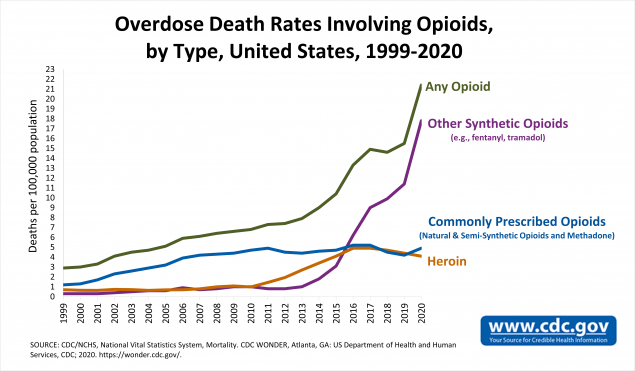 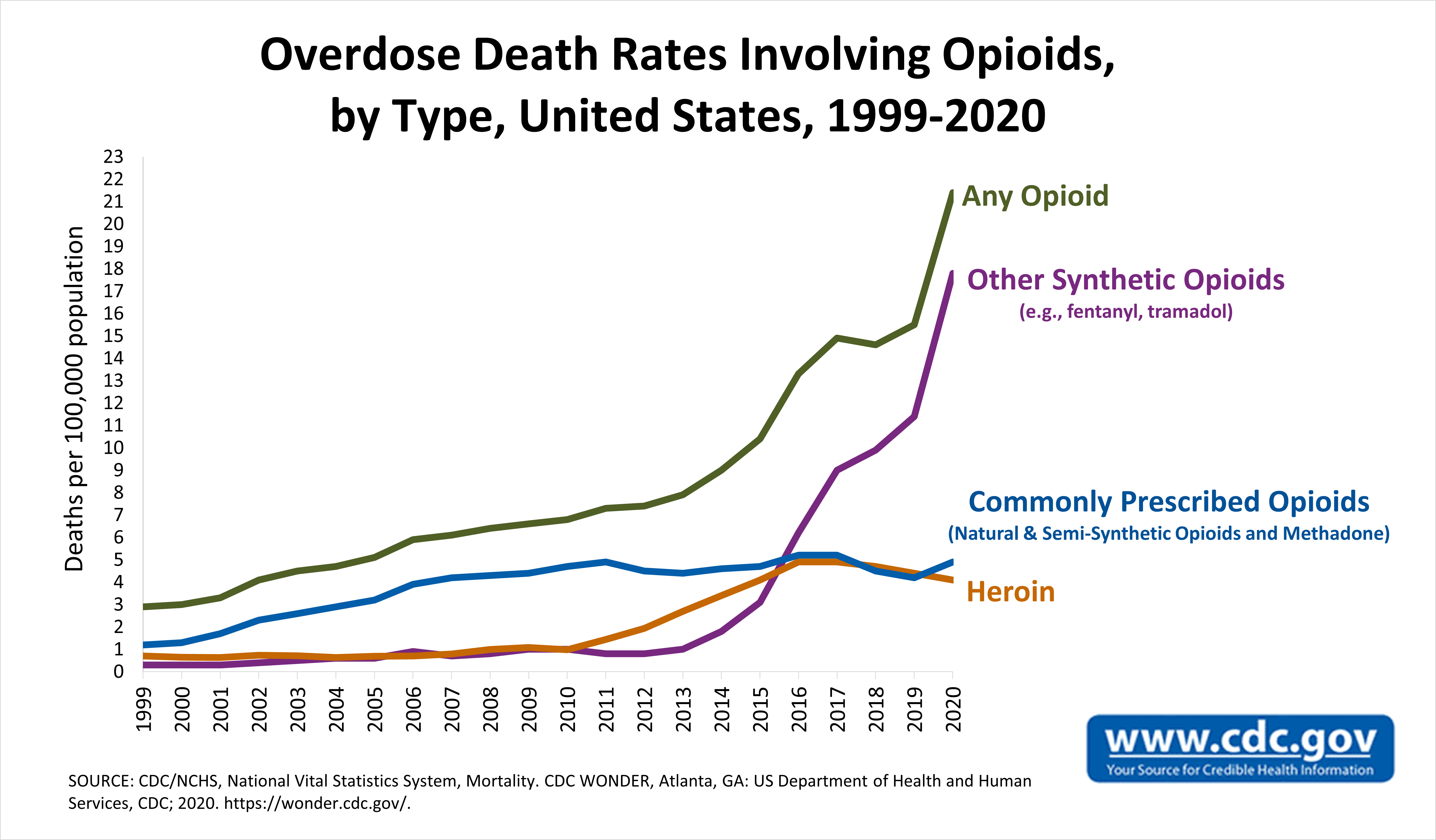 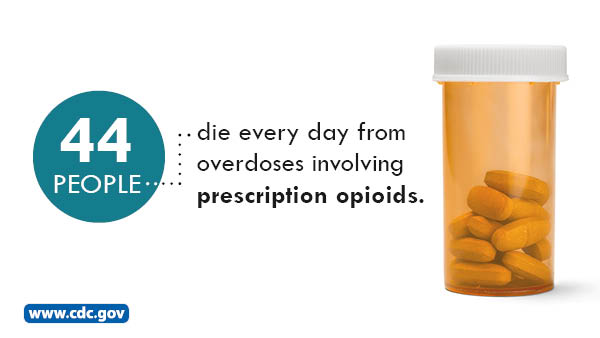 It is important to identify and classify which types of drugs are involved in an overdose, how often they are involved, and how that involvement changes over time. By understanding drug involvement, we can better identify appropriate prevention and response activities.

In more recent years, the data have shown the increase in overdose deaths is being fueled by deaths involving synthetic opioids (other than methadone), likely illicitly manufactured fentanyl (IMF). This increase in deaths has been associated with increases in drug submissions (i.e., drug products tested by forensic labs) of IMF, but not in pharmaceutical fentanyl prescribing rates. 4,10,11,12  Thus, a large proportion of the increase in overdose deaths is presumably due to IMF and not prescription opioids.13 However, current information reported about overdose deaths in NVSS does not distinguish pharmaceutical fentanyl from IMF.

Given the surge in availability of IMF starting in 2013, the CDC Injury Center began analyzing synthetic opioids (other than methadone) separately from other prescription opioids for 2014 mortality data. This analysis provides a more detailed understanding of the increase in different categories of opioid deaths.

Using this approach, we found that more than 16,000 deaths involving prescription opioids (limited to natural and semi-synthetic opioids and methadone) occurred in 2020, which is equivalent to about 45 deaths per day.1 This number is likely an undercount of deaths related to prescription opioids because it does not include deaths associated with pharmaceutical fentanyl, tramadol, and other synthetic opioids that are used as pain medications.

Regardless of the method used to calculate the total numbers, prescription opioids continue to be involved in a significant proportion of drug overdose deaths, and the numbers are likely an underestimate of the true burden, given the large proportion of overdose deaths where the type of drug is not listed on the death certificate. The findings show three distinct but interconnected waves that are driving America’s opioid overdose epidemic: an increase in deaths from prescription opioid overdoses since the 1990s, an increase in heroin deaths starting in 2010, and a more recent surge in deaths from IMF, including fentanyl analogs.1,4

CDC uses a variety of data tools and resources to understand the scope of the drug overdose epidemic, both for overdose deaths and nonfatal overdoses treated in emergency departments or by emergency medical services.