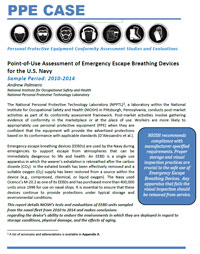 The National Personal Protective Technology Laboratory (NPPTL), a laboratory within the National Institute for Occupational Safety and Health (NIOSH) in Pittsburgh, Pennsylvania, conducts post-market activities as part of its conformity assessment framework. Post-market activities involve gathering evidence of conformity in the marketplace or at the place of use. Workers are more likely to appropriately use personal protective equipment (PPE) when they are confident that the equipment will provide the advertised protections based on its conformance with applicable standards (D’Alessandro et al.).

Emergency escape breathing devices (EEBDs) are used by the Navy during emergencies to support escape from atmospheres that can be immediately dangerous to life and health. An EEBD is a single use apparatus in which the wearer’s exhalation is rebreathed after the carbon dioxide (CO2) in the exhaled breath has been effectively removed and a suitable oxygen (O2) supply has been restored from a source within the device (e.g., compressed, chemical, or liquid oxygen). The Navy used Ocenco’s M-20.2 as one of its EEBDs and has purchased more than 400,000 units since 1998 for use on naval ships. It is essential to ensure that these devices continue to provide protections under typical storage and environmental conditions.

This report details NIOSH’s tests and evaluations of EEBD units sampled from the naval fleet from 2010 to 2014 and makes conclusions regarding the device’s ability to endure the environments in which they are deployed in regard to storage conditions, physical damage, and the effects of aging.