This Centers for Disease Control and Prevention (CDC) web site provides information about radioactive fallout from nuclear weapons tests conducted in the atmosphere around the world (global weapons testing) during the 1940s and 1950s. CDC and the National Cancer Institute (NCI) have studied whether it is possible to estimate the health effects to Americans from this global fallout. In the process, CDC and NCI were able to make some estimates of how much fallout exposure people received, what some of the possible effects might be, and how frequently the effects might occur.

Before 1963, the United States and other countries conducted more than 500 nuclear weapons tests in the atmosphere. During these tests, radioactive particles and gases were spread in the atmosphere. Depending on the size and type of weapon that was exploded, some of these particles and gases traveled great distances before falling to earth (called fallout) where people could be exposed to the radiation.

How People Were Exposed

People can be exposed to radioactive fallout on the outside of the body (external) or inside the body, such as in a specific organ (internal). The total quantity of radiation a person is exposed to is called the “dose.”

Exposure to radioactive material from fallout may occur in several ways: 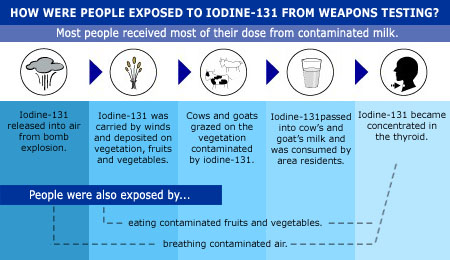 The CDC/NCI project studied 19 different radioactive materials (isotopes) in the fallout that were most likely to affect people’s health. Radioactive iodine (called I-131) was the most important isotope in fallout.

Some of these isotopes could affect people through external exposure (exposure to radiation outside the body) while some could affect people through internal exposure (exposure of a specific internal organ to radiation inside the body). Some radioactive materials remain for only a short time, while others remain for a long period. Because some of the isotopes in fallout from weapons testing were the long-lasting type, a small amount of radioactive fallout remains in the environment today, and people can continue to be exposed.

Top of Page
How Much Radiation Exposure People May Have Received

CDC and NCI scientists were not able to measure how much radiation exposure each individual person received, because much of the information needed to calculate a person’s dose, and the associated health risk is unavailable. However, scientists were able to estimate the dose to which an average person might have been exposed.

All people who were born since 1951 have received some exposure to radiation from weapons testing-related fallout. Some people who received higher radiation doses may have an increased risk of cancer from this exposure, although CDC and NCI scientists believe this risk is small for most people. Your individual dose from fallout will depend on a number of factors such as where you lived when the testing occurred, how much time you spent outdoors, the weather, how much milk you drank and fresh fruits and vegetables you ate, and other personal lifestyle and individual factors.

Top of Page
How Global Fallout Can Affect Your Health 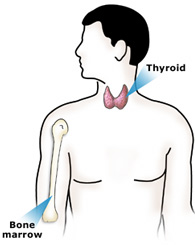 Because all people in the United States who were alive since 1951 received some radiation exposure from fallout, some people may have an increased risk of cancer from this exposure, in particular, thyroid cancer. CDC and NCI scientists believe that although the potential for developing thyroid cancer from exposure to global fallout is small, it is important for people to be aware of the risks.

Iodine-131, called “I-131,” which exposes the thyroid gland for about 2 months after each nuclear test, was the most important harmful radioactive material (isotope) in global fallout. People exposed to I-131, especially during childhood, may have an increased risk of thyroid disease, including thyroid cancer many years later. Thyroid cancer is uncommon and is usually curable. NCI has more information about I-131 and thyroid disease at its Web site at www.cancer.gov/i131/external icon.

Other radioactive materials in fallout, such as strontium-90, can affect a person’s bone marrow and lead to an increased risk for leukemia. However all studies have shown the risk to be very small. Scientists continue to study the risks from exposure to these isotopes and others.

What You Can Do If You're Concerned About Exposure

If you have health concerns after learning about the global fallout study, you may want to

Top of Page
About the CDC/NCI Global Fallout Study

In 1998, Congress asked CDC and NCI to see if it would be feasible to estimate whether Americans have suffered health effects from nuclear weapons tests in the atmosphere. The weapons tests were done before 1963 by the United States and other countries. CDC and NCI found that such a study could be conducted, and made preliminary estimates of the health effects to the public on the basis of the information that was readily available. CDC and NCI provided a progress report to Congress in 2000, which included a technical report describing the research. The CDC/NCI work builds on a study completed earlier by NCI on health effects from atmospheric weapons testing done at the Nevada Test Site during the Cold War.

In 2002 CDC asked the National Academy of Sciences (NAS), a group of scientific experts, whether they thought CDC and NCI had used the best scientific methods for the study. NAS issued a report in February 2003 that made several recommendations for improving the report of the study and suggested that no further study of global fallout be done at this time. For more information, you may wish to review the following reports:

You may wish to view these other resources about radiation and cancer for more information about these topics.