What is Radiation? The Ionized Atom

Atoms are the building blocks of matter. Their structure determines their elemental and chemical properties.

Atoms are composed of a nucleus, containing protons and neutrons, surrounded by a cloud of electrons.

Most atoms are stable, meaning they have a good balance of neutrons and protons. But some atoms have an unstable combination blend of protons and neutrons. Isotopes are forms of elements that have a different number of neutrons.

Atoms seek to be stable; so, to get to a more stable state, the atom expels energy from the nucleus in the form of a particle or ray.

To see an example of how this process works, look below:

Think of the carbon atom mentioned above. Every carbon atom has six protons, and the majority of carbon atoms have six neutrons. 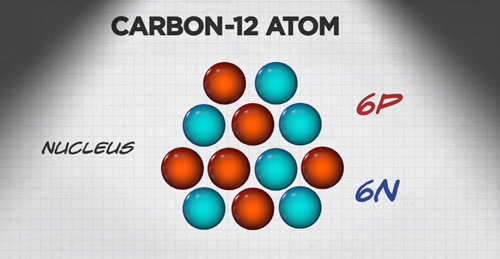 But some types of carbon have more than six neutrons. We call forms of elements that have a different number of neutrons, isotopes. For example, carbon-14 is a radioactive isotope of carbon that has six protons and eight neutrons in its nucleus. We call it carbon-14 because the total number of protons and neutrons in the nucleus, also known as the mass number, adds up to 14 (6+8=14).

If we wanted to abbreviate the name of an isotope, we’d use the elemental symbol and the mass number, so carbon-14 would be abbreviated C-14.

Because carbon-14 has six protons, it is still carbon, but the two extra neutrons make the nucleus unstable.  In order to reach a more stable state, carbon-14 releases a negatively charged particle from its nucleus that turns one of the neutrons into a proton.

This new configuration of the nucleus – with seven protons and seven neutrons – leaves the atom more stable, but it is no longer a carbon atom.  Since one of the neutrons turned into a proton, the atom is now a nitrogen atom.

In the carbon-14 example, the atom gives off radiation from the nucleus to reach a more stable state.  In doing so, the composition of the nucleus changes, and we are left with a different element that is more stable.  This process is known as radioactive decay.

Different radioactive isotopes give off different kinds of radiation, and decay at different rates.  To learn more, click here.

Atom — The smallest particle of an element that can enter into a chemical reaction.

Electron  — An elementary particle with a negative electrical charge and a mass 1/1837 that of the proton. Electrons surround the nucleus of an atom because of the attraction between their negative charge and the positive charge of the nucleus. A stable atom will have as many electrons as it has protons. The number of electrons that orbit an atom determine its chemical properties. See also neutron

Isotope  — A nuclide of an element having the same number of protons but a different number of neutrons.

Neutron  — A small atomic particle possessing no electrical charge typically found within an atom’s nucleus. Neutrons are, as the name implies, neutral in their charge. That is, they have neither a positive nor a negative charge. A neutron has about the same mass as a proton. See also alpha particle, beta particle, gamma ray, nucleon, x-ray.

Nucleus — The central part of an atom that contains protons and neutrons. The nucleus is the heaviest part of the atom.

Proton  — A small atomic particle, typically found within an atom’s nucleus, that possesses a positive electrical charge. Even though protons and neutrons are about 2,000 times heavier than electrons, they are tiny. The number of protons is unique for each chemical element. See also nucleon.

Radiation  — Energy moving in the form of particles or waves. Familiar radiations are heat, light, radio waves, and microwaves. Ionizing radiation is a very high-energy form of electromagnetic radiation.

Radioactive decay — Disintegration of the nucleus of an unstable atom by the release of radiation.

Radioactivity — The process of spontaneous transformation of the nucleus, generally with the emission of alpha or beta particles often accompanied by gamma rays. This process is referred to as decay or disintegration of an atom.

Radionuclide  — An unstable and therefore radioactive form of a nuclide.