How am I exposed to radiation from airport security screening? 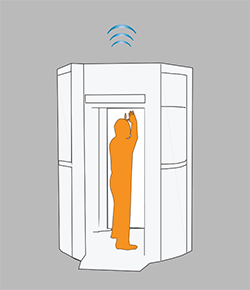 You may have heard that some airports previously used “backscatter” technology, which involved x-rays. Backscatter technology is no longer being used in U.S. airport security screenings.

What is the radiation risk from airport security scans?

As mentioned above, the United States uses millimeter-wave technology in airport security scans.  This form of technology uses low-energy non-ionizing radiation that releases thousands of times less energy than a cell phone.

The U.S. Food and Drug Administration (FDA) has federal authority to set standards for machines that produce radiation, including millimeter-wave security screening systems.

NCRP: NCRP Report No. 160, Ionizing Radiation Exposure of the Population of the United Statesexternal icon