Three common measurements of radiation are the amount of radioactivity, ambient radiation levels, and radiation dose. But, to get accurate and reliable measurements, we need to have both the right instrument and a trained operator. It is important to maintain radiation detection equipment to ensure it is working properly.

It’s All About the Energy!

Measuring the Amount of Radioactivity 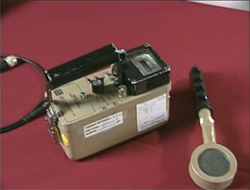 Learn more about measuring the amount of radioactivity