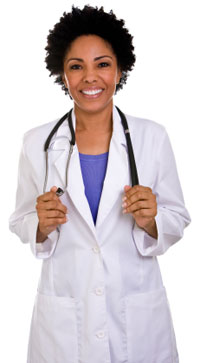 To find out if a person has von Willebrand disease (VWD), the doctor will ask questions about personal and family histories of bleeding. The doctor also will check for unusual bruising or other signs of recent bleeding and order some blood tests that will measure how the blood clots. The tests will provide information about the amount of clotting proteins present in the blood and if the clotting proteins are working properly. Because certain medications can cause bleeding, even among people without a bleeding disorder, the doctor will ask about recent or routine medications taken that could cause bleeding or make bleeding symptoms worse.

This common test measures the amount of hemoglobin (the red pigment inside red blood cells that carries oxygen), the size and number of red blood cells, and the numbers of different types of white blood cells and platelets found in blood. The CBC is normal among people with VWD. However, if a person with VWD has unusually heavy bleeding or bleeds for a long time, the hemoglobin and the red blood cell count can be low.

This test measures how long it takes for blood to clot. It measures the clotting ability of factors VIII (8), IX (9), XI (11), and XII (12). If any of these clotting factors is too low, it will take longer than normal for the blood to clot. The results of this test will show a longer clotting time among some people with VWD. However, the results of this test will be normal among people with mild VWD.

This test also measures the time it takes for blood to clot. It measures primarily the clotting ability of factors I (1), II (2), V (5), VII (7), and X (10). If the level of any one of these factors is too low, it will take longer than normal for the blood to clot. The results of this test will be normal among most people with VWD.

This test also helps doctors assess a patient’s ability to form a blood clot. This test is ordered either along with other blood clotting tests or when a patient has an abnormal PTexternal icon or APTT testexternal icon result, or both. The results of this test will be normal among people with VWD. Fibrinogen is another name for clotting factor I (1).

Specific tests are required to diagnose which bleeding disorder is there. Often these tests need to be repeated several times before an accurate diagnosis can be made. This is because the levels of clotting factors in the blood vary over time as a result of changes the body might be reacting to―such as stress, pregnancy, and infections―that can affect the test results.

The blood tests that a doctor can order to diagnose VWD (or another platelet disorder) include: