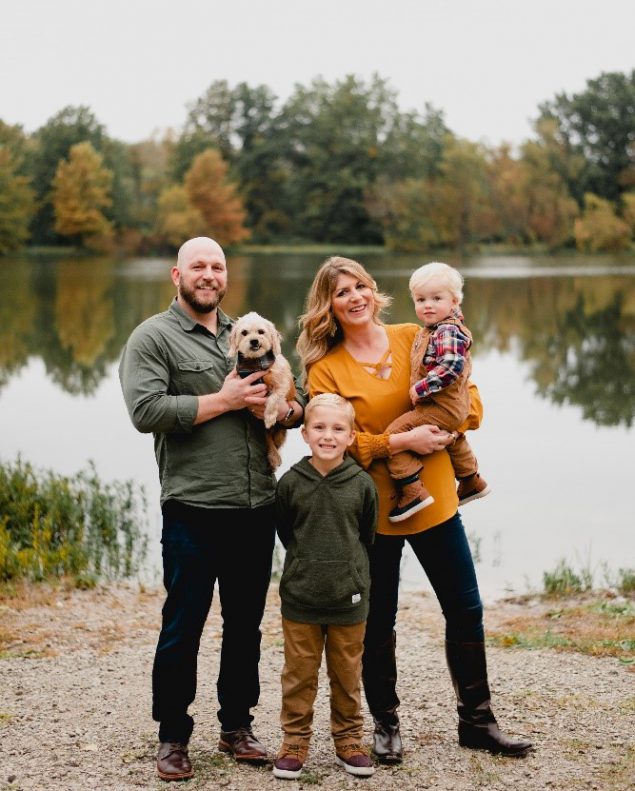 For Brooke Connell, von Willebrand disease (VWD) is a family affair. At 6 months old, Brooke was diagnosed with the most severe form of VWD: type 3. Before her diagnosis, no one in her family knew anything about the condition. But after she was diagnosed, her family members, including her mother and three older brothers, were tested. They, too, learned they had VWD, albeit a milder form known as type 1.

Looking back, Brooke acknowledges there were some signs of a family history of the disease. Her older twin brothers always had nosebleeds; however, because they had the mild form of the disease, they didn’t experience many symptoms. It wasn’t until Brooke was diagnosed at her 6-month checkup that her parents learned of her condition and, later, how it ran in the family. At the appointment, the doctor held Brooke down to draw blood. The next day, her abdomen was covered in bruises. This prompted doctors to run additional tests to find out what was causing the bruising. A blood test was ordered to check her factor (proteins in the blood that help control bleeding) levels. The results indicated very low factor levels.

Today Brooke is 37 years old and works for a health system as the Director of Marketing. She is also a mother of two young boys who are also affected by the disease: both her 7-year-old son Chance and her 2-year-old son West have VWD type 1.

To learn more about VWD, Brooke’s family read a lot about the condition and got involved with the National Hemophilia Foundation (NHF), attending their annual conferences to meet other people affected by the condition. However, according to Brooke, it was difficult finding people like her who had VWD type 3: “You don’t meet too many people with severe [VWD type 3]. The mild patients have a completely different experience with the disease, so I always related to hemophilia patients more. The best thing that happened to me was the VWD Connect Foundation’s Type 3 Conference that I went to in 2017. It was life-changing! There were people there who knew what I was talking about. They had the same symptoms. To see older women who were successfully living with VWD was so comforting.”

Since college, Brooke has received care at a hemophilia treatment center (HTC). Prior to that, her pediatrician and pediatric hematologist managed her care. According to Brooke, she is finally able to fully manage her condition, and the advent of self-infusion was a “game-changer” for her. “I used to have to go to the hospital to treat every bleed, but now I can infuse at home,” said Brooke. In fact, she explained, her boyfriend at the time, now her husband, learned how to mix and infuse factor with her. “He gives me the majority of my factor doses. I don’t think most people would know I have this disease because it’s so well managed now with factor and prophylaxis (preventive treatment).”

Growing up with VWD hasn’t been easy for Brooke. Having VWD limited her options for participating in certain sports, and living in a small town meant a lot of travel to access the hospitals where she could receive the best treatment. “Growing up, I was a tomboy. I wanted to do every sport. I loved basketball, but I had too many bleeds. The doctors said I had to stop playing. As a kid, prophylaxis was never an option for me. It was so hard. Anything could cause a bleed. Track, kickball. You’re just not as carefree being a child with a disease like that,” Brooke explained.

Brooke’s menstrual cycle also posed problems for her. “I struggled with heavy periods. My first period lasted 2 full weeks. I had to take birth control pills to manage it [the bleeding]. It’s embarrassing. There is a stigma attached to taking birth control at a young age. I would tell people it’s hormone replacement.” Brooke worried what would happen when she went off the pill because it took a lot of factor to manage the bleeds.

Having a family of her own was also a challenge Brooke faced. She had a hard time getting pregnant, going through numerous rounds of in vitro fertilization with her first son. “It was challenging to find a provider who was willing to do it [the procedure]. They thought it was too risky,” Brooke said. She suffered five miscarriages trying to build her family. The delivery of her son was also challenging. “I had to deliver without an epidural and had to have 5 pints of blood with my first delivery. I had a post-partum hemorrhage 3 days after my son was born and had to go into surgery to stop the bleeding. It was tough.”

Despite all of these challenges, Brooke says, she has learned how to speak up for herself: “I’ve had to. It’s made me strong. It’s empowered me.”

Brooke has been involved in the bleeding disorder community for quite some time. She has attended NHF’s annual conferences, served on the board of her local NHF Chapter, the Midwest Hemophilia Association, and has participated in Washington Days several times; she is now active in the VWD Connect Foundation.

Brooke offers the following advice for others: “Learn all you can. Network to meet people and find people like you. That’s what’s going to get you through. When I was going through issues getting pregnant, connections we made were so valuable. I reached out to Dr. Andra James at Duke University after hearing her present at an NHF Conference, and because of that, we were able to have a child because of her knowledge and connections.”

And for the parents who may be reading this, Brooke wants you to know, “Everything’s going to be okay. There are such advances in treatment that I didn’t have. This diagnosis shouldn’t hold you back.”

CDC thanks Brooke for sharing her story.