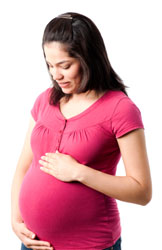 With proper care, women with von Willebrand disease (VWD) can have a successful pregnancy and deliver a healthy child. A woman who has VWD should be monitored closely throughout her pregnancy by her doctors.

It is important for a woman’s health care providers to be aware that she has VWD so that plans can be made for a safe delivery. If a woman is receiving care at a hemophilia treatment center, those doctors and nurses should be involved and work closely with the doctor who is delivering the woman’s baby. Working together in this way will help the doctor who is delivering the baby take special safety measures to avoid injury. These safety measures include not using forceps or a vacuum extractor to assist in the delivery of the baby, if possible. The same precautions to protect the baby apply if the father has VWD.

Meet three women and hear about their experiences living with von Willebrand Disease.

To reduce the chances of having problems during pregnancy and after delivery, a woman with VWD should:

To reduce the chances that her baby will have a problem after delivery, a woman with VWD or a woman having a baby with a man who has VWD should: