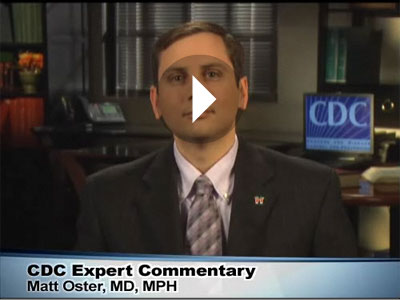 Screening for critical congenital heart defects (critical CHDs) can help identify some babies with a critical CHD before they go home from the birth hospital. This allows these babies to be treated early and may prevent disability or death early in life.

Number of Babies that Screening Can Help

“After a normal pregnancy, Alex was born at 40 weeks via C-section. Everything seemed fine at first. After some time together, Alex was taken to the nursery to get cleaned up, but after 3 hours he still was not back with us. Finally, the pediatrician came in and explained that when a nurse was getting him dressed to come back to our room, she noticed that his nail beds were turning blue. So, she screened him using pulse oximetry.”

“Not having any idea what he was talking about, I told him that my husband and I have had asthma since childhood. He assured me that was not the problem and that they felt it was a problem with his heart. After a brief amount of time and an echocardiogram, it was determined that Alex had tricuspid atresia with pulmonary atresia.”

“During the first few months of his life, Alex underwent two open heart surgeries, and he will need a third surgery. But now, Alex is an active and playful toddler. He is walking, running, talking, eating, laughing and trying to toilet train himself! He also enjoys reading and playing with his sister. Even though we have had a roller coaster of emotions, I cannot imagine how different our lives would be if that nurse did not notice the change in his color and if his oxygen level was not checked.”

Importance of Critical CHD Diagnosis Before Leaving the Hospital

When babies with an undiagnosed critical CHD leave the hospital, they might have very serious problems, such as cardiac collapse (when a baby’s heart stops working properly and can’t get oxygen to the body) or death within the first few days or weeks they are at home.

Other costs, in addition to those of the screen itself, are important as well. Babies that fail the critical CHD pulse oximetry screen will need to have extra medical tests, might spend more time in the hospital, or be transferred to another hospital for specialized treatment. These costs need to be considered when looking at total costs for critical CHD screening programs. However, if doctors confirm that these babies do have a critical CHD, they will also receive the care they need in a timely manner and possibly avoid other costs like emergency care.

Overall, pulse oximetry screening is cost effective, which means that the health benefits of screening outweigh the costs of screening.8 The CDC estimates a cost of $12,000 for every year of life gained by critical CHD screening.9

The intent of the Contingency Plan is to facilitate collaboration among federal agencies and state, local, territorial, tribal, and regional efforts to screen newborns for identified conditions during a public health emergency. This effort is limited to those areas of the newborn screening system (screening test, diagnosis and follow-up, treatment and management, evaluation, and education), for which the state public health agency assumes an oversight role.