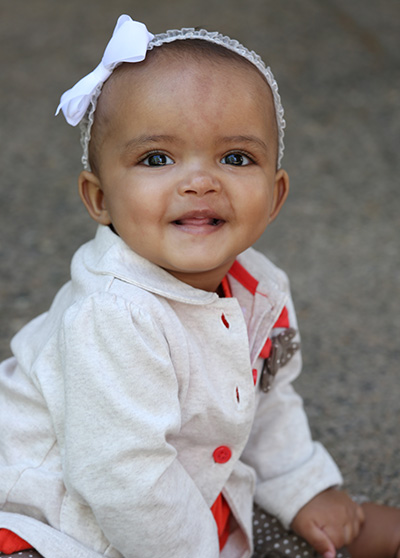 A birth defect diagnosis can be difficult to comprehend and prepare for. Venesha felt shocked when her daughter, Renee, was diagnosed with spina bifida shortly after birth. Read about how Venesha moved forward after the diagnosis and learned how to best care for Renee, who has become a fearless little girl who doesn’t let spina bifida define her.

When I was pregnant with Renee, I had a near perfect pregnancy despite some sharp pains in my lower belly every so often. I delivered Renee via a scheduled C-section at 39 weeks. During the delivery, I remember seeing her face. And then I remember noticing something odd and thought, “wait, what’s that bump on her back?” It looked like an extra rump on her bottom. The doctor said it was probably a collection of blood vessels and that the bump would likely go down.

The next day, the doctor did some tests to look at her spine. He told us he thought it was spina bifida. My first thought was, “Spina what?” I had never heard of spina bifida before. The doctor said that Renee needed to be transferred to the NICU (Neonatal Intensive Care Unit) at a hospital across town to see a neurosurgeon. I was shocked. A neurosurgeon! I couldn’t understand it. I had received both genetic testing and several ultrasounds. How could this have gone undetected?

After Renee’s diagnosis, I was left to my own anxiety. I searched the internet for more information about spina bifida. Some of the images that I found were hard to look at. I read about all of the possible side effects and challenges that Renee would have to endure. I managed to find an image showing different types of spina bifida and decided Renee’s type looked like lipomyelomeningocele.

It is a terrible feeling to have your two-day-old infant taken from your arms and placed in a traveling incubator box. Luckily, I was able to be transferred to the new hospital as well. I met with the neurosurgeon and he tried to explain everything to us. I asked flatly, “Is it lipomyelomeningocele?” Surprised, he replied, “Umm, yes, that is the Latin term for it.” Once we had that out in the open, I wanted to know what to expect. Renee spent a week in the NICU having additional tests. During that time, the nurses trained me on how to use a catheter, which is a tube inserted in the bladder that can help drain her urine. Renee must not have liked that, because after the second time, if we even got near her with the catheter, she’d pee.

Despite her diagnosis, the only issue Renee had after her surgery to fix her spine was foot drop (inability to lift the front part of the foot). Now, we are working to rehabilitate her foot. She continues to succeed despite her challenges with spina bifida. She loves to cruise the furniture and dance. We recently celebrated her first birthday. We believe that while she has spina bifida, it does not have her; it does not define her. She’s a firecracker—so determined and fearless.