Encephalocele (pronounced en-sef-a-lo-seal) is a rare type of birth defect of the neural tube that affects the brain. 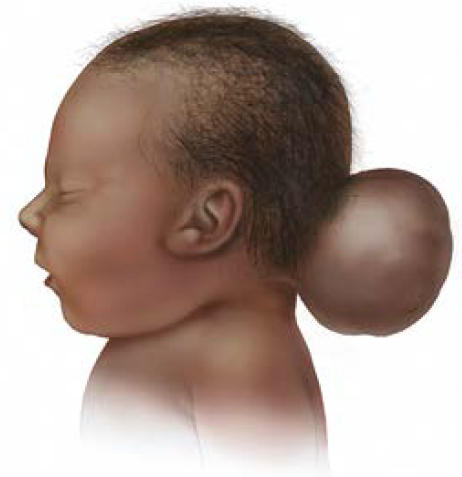 Encephalocele is a rare type of birth defect of the neural tube that affects the brain. The neural tube is a narrow channel that folds and closes during the third and fourth weeks of pregnancy to form the brain and spinal cord. Encephalocele is a sac-like protrusion or projection of the brain and the membranes that cover it through an opening in the skull. Encephalocele happens when the neural tube does not close completely during pregnancy. The result is an opening anywhere along the center of the skull from the nose to the back of the neck, but most often at the back of the head (pictured), at the top of the head, or between the forehead and the nose.

How Many Babies are Born with Encephalocele?

Researchers estimate that about 1 in every 10,500 babies is born with encephalocele in the United States.1

Although the exact cause of encephalocele is unknown, scientists believe that many factors are involved.

There is a genetic (inherited) component to the condition, meaning it often occurs in families that have family members with other defects of the neural tube: spina bifida and anencephaly. Some researchers also believe that certain environmental exposures before or during pregnancy might be causes, but more research is needed. CDC works with many other researchers to study factors that can

The following is an example of what CDC researchers have found:

CDC continues to study birth defects, such as encephalocele, and how to prevent them. For example, taking 400 micrograms of the B vitamin, folic acid, every day before and during early pregnancy can help prevent some major birth defects of the baby’s brain and spine, such as encephalocele. If you are pregnant or thinking about becoming pregnant, talk with your doctor about ways to increase your chances of having a healthy baby.

Usually encephaloceles are found right after birth, but sometimes a small encephalocele in the nose and forehead region can go undetected. An encephalocele at the back of the skull is more likely to cause nervous system problems, as well as other brain and face defects. Signs of encephalocele can include

Resources for Families and Individuals Affected by Encephalocele