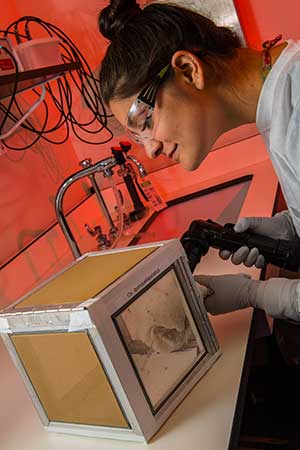 Entomologist checks on mosquitoes being raised in a laboratory.

To be successful, the male SIT mosquitoes released into an area must largely outnumber wild male mosquitoes. Once released, sterile male mosquitoes mate with wild females, and because of sterility, no offspring are produced. Over time, the numbers of the targeted mosquito species in the area are reduced.

SIT mosquitoes cannot reproduce in the wild. Therefore, once SIT male mosquitoes stop being released into an area, the specific species of mosquito being targeted will, over time, return to normal.

Male mosquitoes do not bite people or animals. They feed on nectar. Therefore, people living in the release area will not be bitten more than usual.

SITs for mosquito control can be used as part of an integrated mosquito management approach. SIT may be a preferred way to reduce numbers of mosquitoes in areas where use of insecticides is not possible, not supported by a community, or where insecticide-resistance has reduced the effectiveness of insecticides.