In the United States, injury is the leading cause of death for children and adults ages 1–44.

CDC’s Injury Center is the leading expert on protecting people, saving lives, and reducing the costs of injuries and violence. The Center’s mission is to prevent injuries and violence through science and action. One way we do this is working with state health departments to implement programs that keep people safe, healthy, and productive.

On This Page
Supporting States to Save Lives 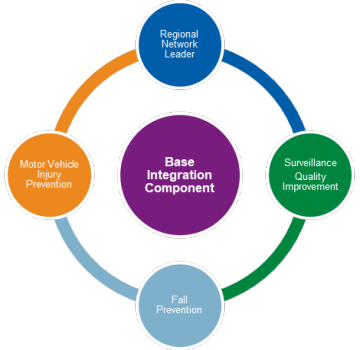 The Injury Center invested in 20 states to address their most pressing issues through the Core Violence and Injury Prevention Program (Core VIPP) from 2011-2016. The funding helped strengthen state capacity to collect and use data to understand local injury issues and challenges, plan injury prevention and control efforts, and carry out and evaluate life-saving interventions to protect their residents.

In 2011, CDC’s Office of the Director (OD) provided one year funding to support eight additional states for the Base Integration Component (for a total of 28 states) and six additional states for the Motor Vehicle Policy Component (for a total of 10 states). This discretionary funding support from the CDC OD greatly enhanced the Injury Center’s capacity for addressing the motor vehicle winnable battle.

The Core VIPP included a Base Integration Component that funded all 20 states to build their capacity for violence and injury prevention. Some of the health departments also received additional funding for: 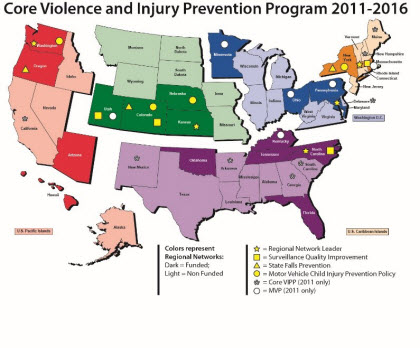 The states used this funding in five key areas:

Grantees were required to identify at least four injury priority areas to address during the five-year funding period. The top focus areas selected by states included: 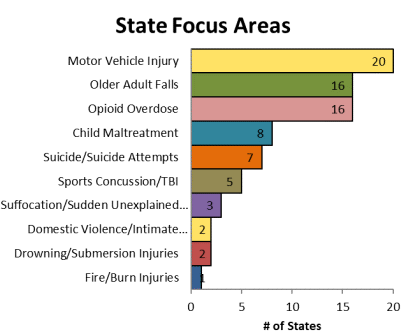 Older adult fall and opioid overdose prevention were the next most common areas of interest.

Four of the 20 funded states received additional funding for Surveillance Quality Improvement (SQI). These states were Colorado, Massachusetts, North Carolina, and Utah. They used their funding to:

The SQI states played a significant role in the development of evaluation and validation procedures for the Proposed ICD-10-CM Injury Diagnosis and External Cause of Injury Frameworkspdf icon.

Core VIPP states used their funding to make strides toward reducing the burden of older adult falls in their communities and clinical settings. Three of the 20 Core VIPP states (Colorado, New York, and Oregon) received additional funding to address falls. They worked to prevent falls in their states by implementing older adult fall prevention programs in community settings and clinical care practice.

Kansas – Reduces Motor Vehicle Injuries and Deaths among Teens by Increasing Seatbelt Use
In 2008, the Crawford County Sheriff’s Department, the Kansas Highway Patrol and the Kansas Department of Transportation developed a pilot project to increase seatbelt compliance among high school students in Crawford County. The Kansas Core VIPP supported the implementation of the Seatbelts Are for Everyone (SAFE) Programexternal icon. SAFE is a teen run, peer-to-peer program developed by the Crawford County Health Department. The school-based program focuses on increasing teen restraint compliance through education, positive rewards, and enforcement. This program brings awareness to the importance of wearing a seatbelt to reduce the number of motor vehicle-related injuries and fatalities among KS teens. During the 2013-2014 school year, 118 schools in 55 counties participated in the SAFE Program. Over 100 law enforcement agencies participated in the state wide SAFE enforcement period resulting in 123 citations issued to teens, 1,460 citations to adults, and 557 child restraint citations. Teen deaths decreased from 77 in 2008 to 48 in 2013 in communities with the SAFE Program. In May 2017, Governor Sam Brownback signed Senate Bill 89, which will increase the adult seatbelt fine from $10 to $30.

North Carolina – Development of Highway Safety Partnerships Leads to Promising Collaborations
The North Carolina Department of Health and Human Services (DHHS) led the development of the state’s first strategic plan for preventing injuries. DHHS formed partnerships with key highway safety partners that collaborated on activities including:
• Informing and developing state-level policy and program recommendations for teen driving safety for the NC Child Fatality Task Force Report,
• analyzing data produced by the Forensic Tests for Alcohol program to better understand patterns of arrest for driving while intoxicated,
• participating in the national and state Traffic Records Coordinating Committee meetings,
• participating in the Road Safety Academy training course provided by the University of North Carolina’s (UNC) Highway Safety Research Center,
• drafting the state plan for preventing driving while intoxicated, and
• collaborating with the Forensic Tests for Alcohol Program, the UNC Highway Safety Research Center and the UNC Injury Prevention Research Center on a proposal to the Governor’s Highway Safety Program to implement a driving while intoxicated prevention program.

Washington – Keeping Children Safe by Encouraging Riding in the Back Seat
A traffic study of 16 elementary schools showed that 20% of children were riding in the front seat. Washington State’s Injury and Violence Prevention program (IVP) used Core VIPP funding to develop the Backseat is Best project to encourage parents to have children sit in the backseat. Backseat is Best started with volunteers conducting baseline surveys during school drop-off, then used letters home to parents, direct education to students, school signage, local news coverage and public service announcements, and incentives in its educational campaign. Within weeks, volunteers found an average 12.3% increase in the number of children riding in the backseat. A three month follow-up found that the changes were sustained, with a 15.3% increase over the baseline in the number of children riding in the backseat. Backseat is Best was a collaboration with Safe Kids Coalition.

Each year, one in every three adults aged 65 and older fall. Falls can cause severe injuries such as hip fractures and traumatic brain injuries. They can also increase the risk of early death. Sixteen of the Core VIPP states used their funding to address older adult falls.

New York – Preventing Falls through Clinician Engagement
The New York State Department of Health (NYSDOH) collaborated with United Health Services (UHS), a large healthcare system, to implement STEADI in 13 primary care practices in one county. UHS modified their system-wide electronic health record system to prompt physicians and office staff to perform annual assessments on patients 65 and older and to track outcomes. Patients were screened and referred to appropriate treatment or programs. The number of risk assessments performed on patients 65 years of age or older in the initial pilot site grew from 39% to 97% in five months. The NYSDOH played an integral role in the development of this partnership. They provided training to the participating primary care practices and worked to increase the number of fall prevention programs offered in the STEADI communities so physicians could refer patients to appropriate programs.

Deaths from drug overdose have risen steadily over the past two decades and have become the leading cause of injury death in the United States. Sixteen of the Core VIPP funded states addressed the growing opioid overdose problem. They focused on the development and implementation of prescription drug monitoring programs, clinical prescribing guidelines, prescriber education programs, supporting naloxone distribution programs, and public education campaigns.

The Oregon Core VIPP held a series of statewide “Rx Summits” to increase enrollment and use of the Prescription Drug Monitoring Program (PDMP), and connect and inform communities about overdose. The percent of prescribing providers and pharmacists using the PDMP increased to 48% for prescribers and 75% for pharmacists between 2010 and 2014. Fatal unintentional overdoses associated with prescription opioid analgesics decreased 17% and unintentional hospitalizations for overdose decreased 19% between 2010 and 2014.

Oklahoma – Prevents Infant Abuse by Spreading the Period of PURPLE® Crying Program
The Period of PURPLE® Crying (PPC)external icon developed by the National Center on Shaken Baby Syndrome educates parents about the normalcy of infant crying and the dangers of shaking an infant. The program is part of Oklahoma’s “Preparing for a Lifetime, It’s Everyone’s Responsibility” initiative to reduce infant deaths in the state. The Core VIPP conducted an evaluation of the PPC program and found that 71% of Oklahoma birthing hospitals implemented the PPC program. The number of birthing hospitals with fully implemented PPC programs increased from 42% in 2012 to 76% in 2015. The number of nonfatal infant AHT injuries decreased 46% from a high of 28 in 2009 to 15 in 2015.

Suicide is a serious public health problem. In 2016, nearly 45,000 Americans died from suicide. Seven of the Core VIPP states addressed suicide in their states.

Colorado – Enhancing Suicide Prevention and Intervention Education through ASIST
The Colorado (CO) Core Violence and Injury Prevention Program partnered with University of Northern Colorado’s (UNC) Department of Applied Psychology and Counselor Education (APCE) to offer the Applied Suicide Intervention Skills (ASIST)external icon training for master and doctoral-level students. ASIST is designed to teach individuals who interact with youth how to identify and react to those who may be at risk for suicide, and refer them to treatment. This training served as a small pilot to assess whether ASIST provided added benefits beyond what students normally receive in their counselor education programs. An evaluation tool was designed to collect qualitative information to better understand the barriers and facilitators related to universities requiring mental health graduate students to take ASIST. Students and faculty that participated in the pilot training reported feeling better equipped to handle suicidal clients than their peers. As a result of these promising findings, UNC plans to encourage counseling graduate students to take ASIST during their practicum.

Ohio – Promotion and Implementation of Ohio’s Youth Concussion Law
In April 2013, the Ohio legislature passed House Bill 143 to address recognition and proper response to youth sports concussions by setting requirements for both schools and youth sports organizations. The law requires that a player be removed from play, concussion information be distributed to parents, and mandatory education be provided for coaches and referees. The Ohio Department of Health (ODH) coordinated a comprehensive campaign to educate parents, coaches, officials, and athletes about the new law. They focused on the importance of proper diagnosis and management before an athlete can to return to play. The campaign included a website, staff to answer calls from the public, media interviews, and advertisements at professional and college sporting events. The ODH collaborated with key partners to evaluate the law’s impact and develop model “return to learn” policies for local school districts.

Massachusetts – Improves Compliance with Sport Concussions Law
The Massachusetts (MA) legislature passed a sports concussion law directing the MA Department of Public Health to develop a head injury safety program. The law resulted in statewide regulations in 2011. The Core VIPP worked with state partners, including schools, on the regulations’ implementation. The Core VIPP reviewed school policies to identify areas where schools needed support and devised strategies to improve outreach and technical assistance. The Core VIPP also compiled and analyzed data from school reports and other information sources to assess awareness and compliance with the regulations. Findings indicated that school reporting from the first year of implementation through 2013-2014 increased by 265% thus indicating an increase in compliance.