CDC recommends that people who purchased fresh blackberries from any Fresh Thyme Farmers Market location (located in 11 Midwest states) or Woodman’s Market (located in Wisconsin and Illinois) during September 9-30, 2019 take the following actions:

At a Glance
By the Numbers 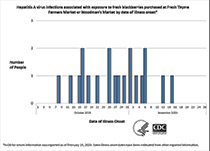 What is Hepatitis A

Symptoms of Hepatitis A

As of February 19, 2020, a total of 20 outbreak-associated cases of hepatitis A were reported from 7 states. A list of the states and the number of cases in each is found on the Map of Reported Cases page.

Illnesses started on dates ranging from October 8, 2019, to November 15, 2019. Ill people ranged in age from 14 to 73 years, with a median age of 50. Sixty percent of ill people were female. Of 19 people with available information, 11 (58%) were hospitalized. No deaths were reported.

Epidemiologic and traceback evidence indicated that fresh blackberries were the likely source of this outbreak.

FDA completed its traceback investigation; however, a single, common source of fresh, conventional blackberries could not be identified.

As of February 19, 2020, this outbreak investigation is over.