Hepatitis A Outbreaks in the United States

In recent years, hepatitis A outbreaks have occurred from several different sources:

In 1996, the Advisory Committee on Immunization Practices (ACIP) first made recommendations to prevent hepatitis A through immunization, focusing primarily on vaccinating people in groups shown to be at high risk for infection and children living in communities with high rates of disease. In 2006, ACIP started recommending routine hepatitis A vaccination of children nationwide. Recent outbreaks have mainly affected adults. Increased vaccination efforts targeting adults in at-risk populations can help limit the size, duration, and spread of person-to-person outbreaks. CDC has provided outbreak-specific considerations for hepatitis A vaccine administration and has updated its overall recommendations on the prevention of hepatitis A virus infection in the United States.

Hepatitis A Cases in the United States 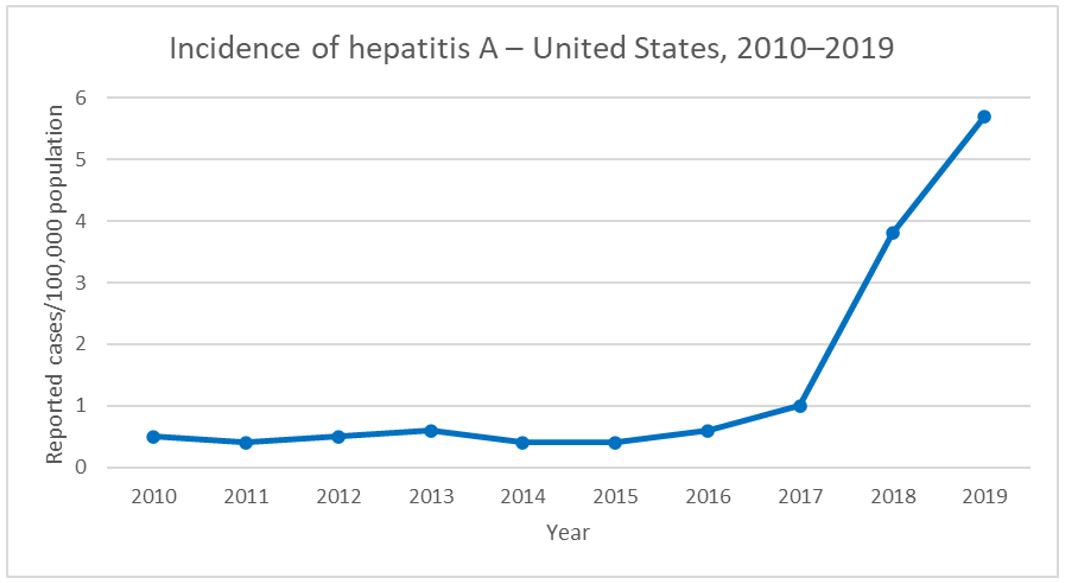 While the average number of annual hepatitis A virus (HAV) infections reported to CDC in recent years has declined substantially compared to 2000, fluctuations have occurred in the last 20 years due to large outbreaks. After a long downward trend, the first increase between 2012 and 2013 (1,562 and 1,781 reported cases, respectively), was due to a large multi-state outbreak associated with pomegranate arils imported from Turkey. Between 2015 and 2016, the reported cases again increased from 1,390 in 2015 to 2,007 cases in 2016. The 2016 increase was due primarily to two hepatitis A outbreaks, each of which was linked to contaminated imported foods. Substantial increases in incident cases of hepatitis A have occurred since late 2016 (3,366, 12,474, and 18,846 reported cases in 2017, 2018, and 2019, respectively) due to ongoing outbreaks reported to CDC among people who use drugs and people experiencing homelessness as well as outbreaks among men who have sex with men.

CDC’s role in responding to hepatitis A outbreaks

For a comprehensive listing of reported foodborne hepatitis A outbreaks, see the National Outbreak Reporting System (NORS) Online Database tool, check the box for “Food,” and under the etiology search option, select “hepatitis.”