CDC is collaborating with public health officials in several states and the U.S. Food and Drug Administration (FDA)external icon to investigate a multistate outbreak of foodborne hepatitis A.

The investigation began in early August when the Virginia Department of Health (VDH) identified an outbreak of hepatitis A cases potentially linked to smoothies from Tropical Smoothie Café restaurants in that state.

Since then, 70 people infected with hepatitis A linked to this outbreak have been reported from seven states: Maryland (6), New York (1), North Carolina (1), Oregon (1), Virginia (55), West Virginia (5), and Wisconsin (1).  Among people with available information, 32 people have been hospitalized.

People with hepatitis A may not have symptoms until 15 to 50 days after consuming a contaminated food or drink. We expect to see more ill people reported in this outbreak because of this long incubation period.

Epidemiologic and traceback evidence available at this time indicate that frozen strawberries imported from Egypt are the likely source of this outbreak.

In interviews, ill people answered questions about the foods they ate and other exposures in the month before they became ill. Of the 70 ill people, 68 (97%) reported drinking a smoothie from Tropical Smoothie Café in the month before illness started. Of the 54 ill people who were interviewed about the type of smoothie, all (100%) reported drinking a smoothie containing strawberries. These ill people purchased smoothies at cafés located in a limited geographical area, including Virginia and neighboring states. The ill person in Oregon traveled to Virginia and while there, had purchased smoothies containing frozen strawberries from a Tropical Smoothie Café location.

On August 8, 2016, Tropical Smoothie Café reported that they removed the Egyptian frozen strawberries from restaurants in Maryland, North Carolina, Virginia, and West Virginia and switched to another supplier. Out of an abundance of caution, Tropical Smoothie Café has since switched to another supplier for all restaurants nationwide. At this time, we do not have information to suggest that there is an ongoing risk of hepatitis A virus infection at Tropical Smoothie Cafes. We are not yet aware of any other restaurants or retailers that may have received frozen strawberries linked to this outbreak. If this information changes, CDC will update the public immediately.

This investigation is ongoing. CDC and state and local public health partners are continuing to work to identify additional ill people and to interview those people about foods they ate before they got sick.

NOTE: CDC recommends that all children be vaccinated against hepatitis A at age 1.  Any parent or caregiver who is unsure if a child has been vaccinated should consult their health care provider and confirm vaccination status.

Information available at this time does not indicate an ongoing risk of hepatitis A virus infection at Tropical Smoothie Cafes.

Cases of hepatitis A have decreased dramatically over the last decade in large part due to successful vaccination programs and policies. Most new cases of hepatitis A are now related to international travel, and occasional foodborne outbreaks. Once a person becomes ill from hepatitis A, the virus can be easily transmitted to household or sexual partners. Thorough hand washing can help minimize transmission among close contacts.

The hepatitis A vaccine is recommended as part of routine childhood vaccinations and for adults at high risk. CDC recommends the following groups be vaccinated against hepatitis A: 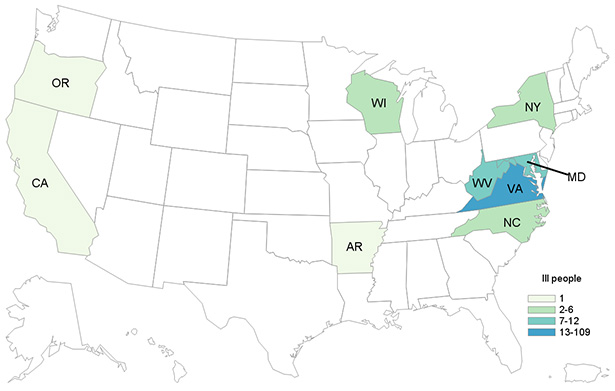