8 Things We Can Do to Achieve Health Equity Around Overdoses 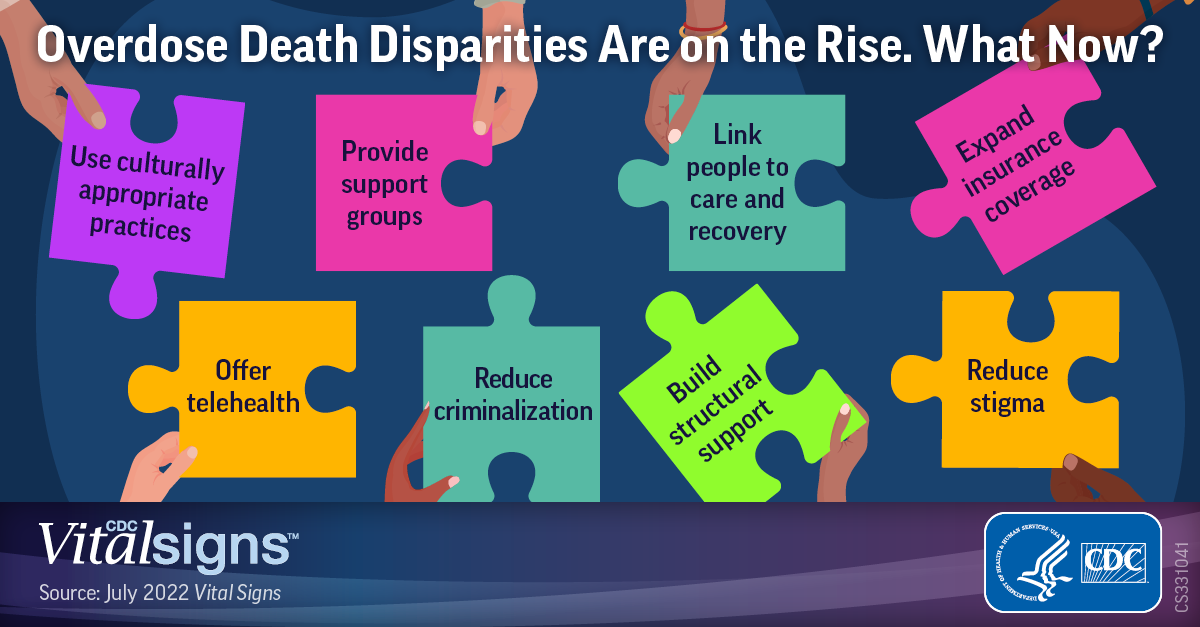 A recent CDC’s Vital Signs report, using drug overdose data from the State Unintentional Drug Overdose Reporting System (SUDORS), found concerning trends and widening disparities between different population groups. From 2019 to 2020, overdose deaths increased 44% for Black people and 39% for American Indian and Alaska Native (AI/AN) people. Most people who died by overdose had no evidence of substance use treatment before their deaths. In fact, fewer people from racial and ethnic minority groups received treatment, compared with White people.

Drug overdoses are preventable. The growing overdose crisis, particularly among people from racial and ethnic minority groups, requires tailored prevention and treatment efforts. It’s time to identify and address cultural, economic, and structural factors that increase risk for overdose and prevent certain groups from getting and staying in treatment and recovery. Tailored prevention and treatment efforts should be designed to restore optimal health for all.

1. Improve access to treatment by offering telehealth and similar options.

Remote healthcare delivery can help people start and continue treatment and care over time. Remote services are especially helpful for people from racial and ethnic minority groups who encounter more barriers to accessing vital services, such as lack of stable housing, reliable transportation, and childcare.

Increasing access to evidence-based treatment for all people who have substance use disorders is a critical part of their care and recovery. Incorporating culturally tailored strategies and providing other support services in languages other than English may improve participation and retention among racial and ethnic minority groups.  Offering people a range of culturally relevant, gender-specific resources empowers them to direct their own participation in community-based services and supports. Some examples of services and supports include health care, peer-support and mutual self-help services, harm reduction services, and faith-based organizations.

It is crucial that people across healthcare, from staff in emergency departments to physicians, nurses, and physician assistants, be trained in awareness of potential biases and caring compassionately and competently for people with substance use disorders. Culturally competent care, awareness of unfair conduct, and non-judgmental communication can help address barriers to accessing treatment, such as stigma and mistrust in healthcare systems.

Rates of stigma toward people who use drugs are high and well documented among healthcare providers and the public. Stigma may limit access to overdose prevention education as well as access to naloxone, and it can reduce early help-seeking behaviors. Learn more about reducing stigma, which can be a major barrier to getting help.

Recovery support groups include culturally and language appropriate services that assist individuals and families working toward recovery from mental conditions and/or substance use disorders. Offering mental health resources and social support services for people who have experienced stigma and discrimination can help reduce the adverse effects of stigma.

Wide income gaps, often negatively impacting people from racial and ethnic minority groups, can lead to lack of stable housing, reliable transportation, childcare, and health insurance, making it even more difficult for people to access treatment and other support services.

6. Reduce criminalization of substance use disorders.

Public health and public safety partnerships can increase access and enhance services for individuals with opioid use disorder involved in the criminal justice system. Services include targeted naloxone distribution; overdose education; and medication for opioid use disorder in jails, prisons, and other correctional settings. Check out our public health and public safety resources.

7. Link people to care and recovery from a variety of settings and through peer support navigators.

Clinicians and health systems can serve as key touchpoints for treatment and prevention strategies because they are able to respond to crises and address barriers to linking patients to medication. Clinicians can also facilitate continued care for physical and behavioral health conditions. Patients who trust their health care provider are more likely to participate in preventive screening, take their medications correctly, and understand their prescriptions. Clinicians and health systems can make culturally competent care available across clinical settings and build connections with public health, public safety, and community-based organizations.

Ensuring a nonjudgmental treatment atmosphere and fostering of mutual or peer support as part of a comprehensive system of care is important, as patients consistently name these as key helpers of their retention in care. When establishing peer support services within overdose response and linkage-to-care initiatives, trust and transparency is promoted by intentionally including members of the peer support and recovery communities in the design of systems, services, and supports. Learn more about linking people to care with medication for opioid use disorder.

8. Improve access to programs that address past and prevent future trauma and other risk factors for substance use.

What can you do?
Related Pages and Resources
Related Features
Learn more about CDC’s work on Drug Overdose