Cholera is an acute, diarrheal illness caused by infection of the intestine with the bacterium Vibrio cholerae and is spread by ingestion of contaminated food or water. The infection is often mild or without symptoms, but sometimes it can be severe and life threatening. 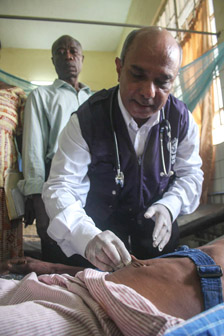 A physician checking a patient for dehydration

Approximately one in ten (5-10%) of infected persons will have severe cholera which in the early stages includes:

Profuse diarrhea produced by cholera patients contains large amounts of infectious Vibrio cholerae bacteria that can infect others if ingested, and when these bacteria contaminate water or food will lead to additional infections. Dispose of human waste appropriately to prevent the spread of cholera.

Persons caring for cholera patients can avoid acquiring illness by washing their hands after touching anything that might be contaminated and properly disposing of contaminated items and human waste. 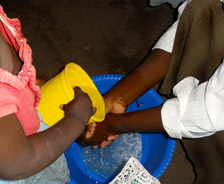 Person washing hands over a bucket of water.

Infected persons, when treated rapidly, can recover quickly, and there are typically no long term consequences. Persons with cholera do not become carriers of the disease after they recover, but can be reinfected if exposed again.