The Southeast Asia Region, which includes Bangladesh and India, has the largest populations at risk for cholera. While reported cases decreased by 72% from 2015 to 2016, reported deaths from cholera in Asia increased sixfold.

Many countries in the Southeast Asia Region face challenges with known risk factors for cholera outbreaks including poverty, lack of development, and high population density. Additionally, the region is susceptible to extreme environmental factors, such as frequent and widespread flooding, that can contaminate water sources and dislocate populations.

Similar to Africa, improving global access to water, sanitation and hygiene (WASH) is a critical step to reducing cholera in the Southeast Asia region.

In Southeast Asia and elsewhere, cholera is underreported and leads to an underestimation of the global burden of this disease. The World Health Organization estimates that officially reported cases of cholera represent only 5–10% of the actual number occurring annually worldwide because of inadequate laboratory and epidemiological surveillance systems and economic, social and political disincentives to case reporting.

Cases of cholera officially reported to WHO in Southeast Asia do not include an estimated 500,000–700,000 cases labeled as acute watery diarrhea. 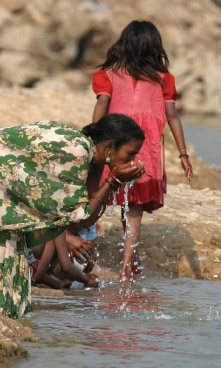