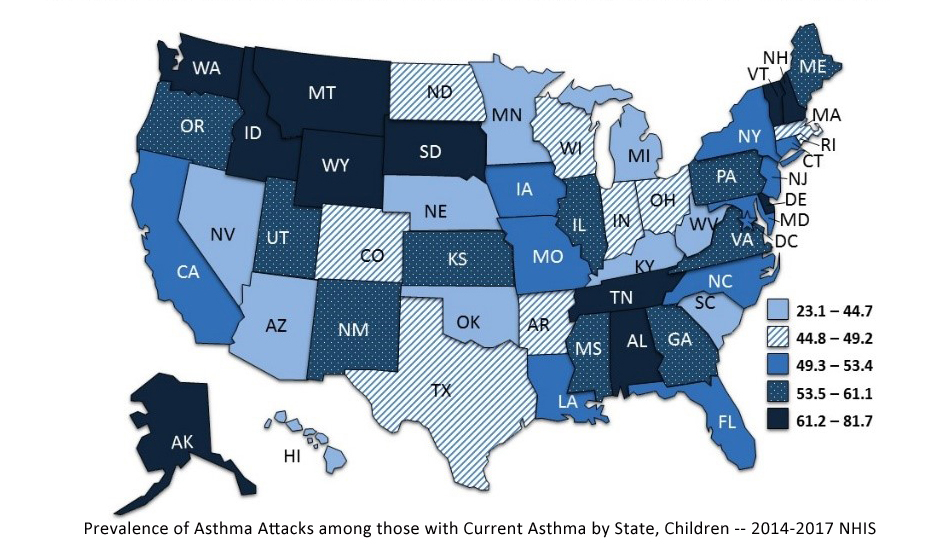 More than 60% of adults with current asthma had uncontrolled asthma

The rate of physician office visits with asthma as the first-listed diagnosis was 304.4 per 10,000 persons.

More adults with asthma than adults without asthma reported having a flu vaccine.

Asthma and Fair or Poor Health

More adults with asthma than adults without asthma have fair or poor health.

Children who have asthma use a hospital emergency department as their usual place for medical care more than other children.

The percent of children with asthma who reported one or more missed school days in 2013 was significantly lower than in 2003.

Frequent use of quick-relief medication among persons with active asthma

Frequent use of quick-relief may indicate inadequate asthma control

Obesity is associated significantly with the development of asthma, worsening asthma symptoms, and poor asthma control. This leads to increase medication use and hospitalizations.

Percentage of People with Asthma who Smoke

Fifty percent of children with current asthma had uncontrolled asthma.

Asthma as the Underlying Cause of Death

Asthma deaths have decreased over time and varied by demographic characteristics.

Flu vaccination among children with asthma varied by age.

Number of Visits to a Health Care Provider(s) among Children

Children with asthma were more likely than children without asthma to visit a health care provider(s) 3 or more times during the past 12 months.

More children with asthma than children without asthma had health care coverage through Medicaid or the Children’s Health Insurance Program (CHIP).

Uncontrolled asthma is associated with decreased quality of life and increased health care system use.

Use of long-term control medication among persons with active asthma

Insurance coverage and barriers to care for people with asthma

Insurance coverage reduces, but does not eliminate, cost barriers for asthma care.

Follow @CDCasthma on Twitter to learn more about helping people with asthma live healthier lives by gaining control over their asthma.