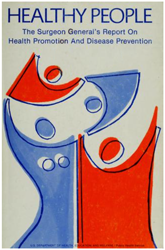 Healthy People 1990 was an outgrowth of the landmark 1979 publication, Healthy People: The Surgeon General’s Report on Health Promotion and Disease Prevention (1), which provided the foundation for the first national health promotion and disease prevention initiative. The report identified five broad national goals, one for each of the five major stages of life (infants, children, adolescents and young adults, adults, and older adults); premature mortality and morbidity were also highlighted. To achieve these goals, Promoting Health/Preventing Disease: Objectives for the Nation (2), released in 1980, set out 226 quantifiable objectives with targets to be achieved by 1990. The objectives were organized in the 15 priority areas identified in the 1979 Surgeon General’s report (1).