PrEP for HIV Prevention in the U.S.

Related Pages
On This Page
SECTION 1: U.S. IS MAKING SUBSTANTIAL PROGRESS IN PREP FOR HIV PREVENTION
What is PrEP?
Pre-exposure prophylaxis (PrEP) is an HIV prevention medication initiated before and continued throughout periods of potential exposure to HIV. It is safe and highly effective when taken as prescribed. The U.S. Food and Drug Administration approved the first PrEP medication for HIV prevention in 2012.

Notable gains have been made in increasing pre-exposure prophylaxis (PrEP) use for HIV prevention in the U.S. Preliminary CDC data1 show that in 2020, about 25% of the 1.2 million people for whom PrEP is recommended were prescribed it, compared to only about 3% in 2015.

The growth in PrEP use, along with increased testing and treatment has played a part in recent decreases in new HIV infections. CDC estimates new HIV infections fell 8% from 2015 to 2019 (37,800 to 34,800), after a period of general stability. The impact of COVID-19 related disruptions in HIV prevention services on these trends is not yet known.

Top of Page
SECTION 2: PREP COVERAGE IS NOT EQUAL, AND DISPARITIES MUST BE ADDRESSED TO REACH ALL WHO COULD BENEFIT EQUITABLY
PrEP use among transgender women

Many longstanding social and economic factors—including transphobia, stigma, systemic racism, experiencing homelessness or unemployment, and others—have put transgender women at high risk for HIV and made it more difficult for them to access services. A recent CDC studypdf icon found that four in 10 transgender women in seven major U.S. cities have HIV. Expanding PrEP use among transgender women is key to decreasing new HIV infections in this population.

The survey showed that 32% of HIV-negative transgender women reported using PrEP, even though 92% were aware of the medication. Previous studies have also revealed high knowledge of PrEP and its benefits but very low uptake among transgender women.

Despite overall progress toward ending HIV, HIV continues to affect some groups severely and disproportionately. Rates of new HIV infections among Black/African American people (hereafter referred to as Black) are over eight times as high—and among Hispanic/Latino people almost four times as high—as that of rates of new HIV infections among White people.

To end the HIV epidemic, we need to scale up HIV testing, make sure people with HIV are linked to care and getting treatment, and ensure equitable access to HIV prevention—including PrEP for everyone who could benefit. However, current PrEP coverage remains uneven across racial and ethnic groups, age groups, and for transgender persons. 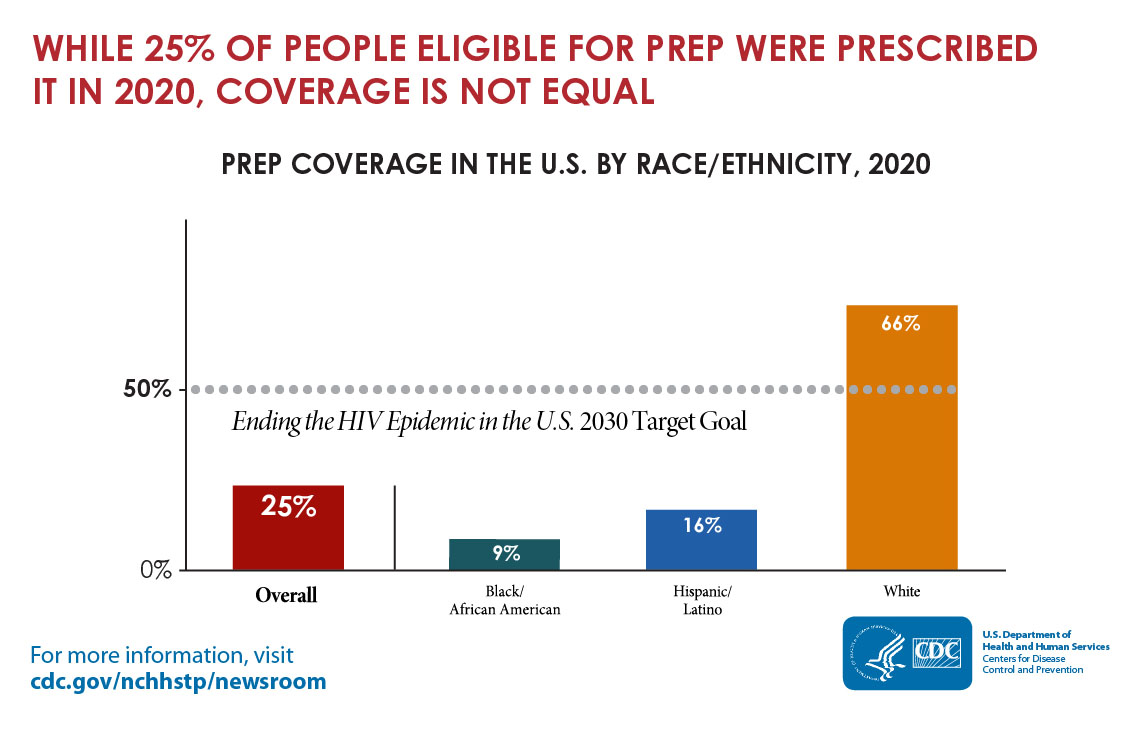 DIFFERENCES IN PREP COVERAGE BY RACE/ETHNICITY IN THE U.S., 2020

DIFFERENCES IN PREP COVERAGE BY RACE/ETHNICITY IN THE U.S., 2020

PrEP coverage is also unevenly distributed among people based on sex. Among people for whom PrEP is recommended, PrEP coverage was about three times as high in 2020 among males (28%) as among females (10%). Cisgender women represented 19% of new HIV diagnoses in 2019, so addressing this imbalance is critical to achieve adequate PrEP coverage to end the HIV epidemic.

1 2020 PrEP prescription data are preliminary and should be interpreted with caution. CDC continues to analyze the impact of the COVID-19 pandemic on filling PrEP prescriptions in state/local jurisdictions.

2 Data on race/ethnicity were not available for all PrEP prescription data and were extrapolated.

Top of Page
SECTION 3: OUR NATION WILL ONLY REALIZE THE PROMISE OF PREP IF PEOPLE CAN ACCESS AND USE IT.

While tremendous progress has been made in reducing HIV transmission since the height of the epidemic, it’s clear that systemic factors are contributing to persistent HIV disparities and stand in the way of national goals.

To end the HIV epidemic, we need to ensure equitable access to HIV care and prevention, including PrEP. This requires that root causes and social determinants that contribute to HIV disparities be addressed, such as poverty, housing instability, unequal access to health care, lack of education, stigma, and systemic racism. CDC has recently declared racism a serious public health threat and is working to address racism as a fundamental driver of racial and ethnic health inequities in the U.S., including the inequities seen in HIV prevention and care.

Since the first studies documenting the effectiveness of PrEP, CDC has worked with numerous partners to make sure that people know about, have access to, and use PrEP effectively. Remaining barriers must be fully addressed, however, for access and use to increase equitably among all who could benefit.

CDC’s efforts have accelerated even further since 2019, when the U.S. Department of Health and Human Services (HHS) announced the federal EHE initiative. Separately, in 2019, the U.S. Preventive Services Task Force (USPSTF) issued a Grade A recommendation that clinicians should offer PrEP to people at high risk of getting HIV. The recommendation led to the requirement that PrEP be provided with no copay for nearly all people with commercial insurance and many people with public insurance. The U.S. Department of Health and Human Services also launched the Ready, Set, PrEPexternal icon program in 2019, which makes PrEP medication available at no cost to people without insurance drug coverage, regardless of income.

CDC also evaluates emerging science, updates clinical guidelines as new PrEP options are approved by the FDA, and develops tools and communication campaigns to help providers prescribe a growing array of PrEP options to people who could benefit. CDC will continue to work with partners to expand efforts to ensure that anyone who would benefit from PrEP can get it, and to increase use of this highly effective prevention strategy.