More people with HIV have the virus under control

Improved access to testing and treatment saves lives, and is helping prevent new infections —
but too many people living with HIV are still not getting the care and treatment they need.

Of the estimated 1.1 million people living with HIV in the United States, 85 percent were diagnosed and knew they had HIV, and 49 percent had the virus under control through HIV treatment, according to new CDC estimates based on the most recent national data from 2014. CDC previously estimated that in 2010, 28 percent of people living with HIV in America had the virus under control.

The analysis released today examines the reach of HIV testing and treatment, both vital components of national efforts to combat HIV. Controlling HIV through treatment — called viral suppression — is a top national priority. Among people who have achieved viral suppression, HIV is detectable only at very low levels in the blood or is undetectable with standard tests. Viral suppression allows people with HIV to live longer, healthier lives and dramatically reduces their risk for spreading HIV to others.

“Half of Americans with HIV now have the virus under control,” said Jonathan Mermin, M.D., M.P.H., director of CDC’s National Center for HIV/AIDS, Viral Hepatitis, STD, and TB Prevention. “We can’t stop halfway — we can test, treat and defeat HIV.”

Expanded availability of testing and treatment, coupled with updated treatment guidelines in 2012 that recommended treatment for all people with HIV infection, were likely major contributors to the nation’s success in driving down annual HIV infections by 18 percent from 2008-2014. 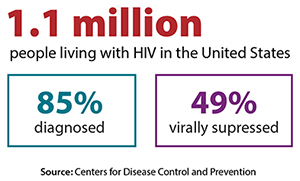 Despite the decline, the annual number of new HIV infections remains too high. Data released earlier this yearpdf icon indicate that 37,600 new infections occurred in 2014 in the United States, and the burden remains greatest among gay and bisexual men, African Americans, Hispanics, and people living in the southern states.

Nine out of 10 HIV infections are transmitted by people who are not diagnosed or not in care. Reducing the number of undiagnosed HIV infections and getting more people into care present the greatest opportunities to improve viral suppression in America.

Sustained effort needed to reach everyone living with HIV

CDC’s analysis makes it clear that half of Americans living with HIV still are not receiving the regular treatment they need to effectively control the virus. Younger people were least likely to be aware of their infection and to have their virus under control. Racial and ethnic disparities persist. In 2014:

According to CDC’s analysis, the percentage of people living with HIV who had been tested and had their infection diagnosed was 85 percent in 2014, an increase from 83 percent in 2010.

“The HIV test plays a heroic role in the nation’s fight against HIV,” said Eugene McCray, M.D., director of CDC’s Division of HIV/AIDS Prevention. “For those with HIV, the test is the first step to care and treatment. For those who are not infected, testing opens the door to more advanced prevention.”

CDC funding supports more than 3 million tests across the country each year that identify on average more than 12,000 people with HIV who were not previously diagnosed — accounting for one-third of all HIV diagnoses a year in the United States. These funds support not only the testing, but also a full range of services that work to quickly link newly diagnosed people to HIV medical care, notify partners who may have been exposed, and reduce future risk behavior. CDC is relentlessly focused on making sure that every person with HIV in America is diagnosed, connected to medical care, and receiving treatment over the long term.

With its national, state and local partners, CDC advances powerful testing and prevention technology; uses data to link HIV-infected people to vital care and re-link them if they have fallen out of care; and tracks HIV trends so that federal and state resources can be quickly directed to the populations and geographic areas with the greatest need. Testing also allows people who are not infected with HIV — but who would benefit from additional interventions — to be linked to prevention resources, including prevention information, condoms and pre-exposure prophylaxis (PrEP).

“We are midway in the HIV prevention marathon,” said Dr. Mermin. “Getting everyone the testing, treatment, and follow-up they need will propel the nation to the finish line.”

CDC works 24/7 protecting America’s health, safety and security. Whether diseases start at home or abroad, are curable or preventable, chronic or acute, stem from human error or deliberate attack, CDC is committed to respond to America’s most pressing health challenges.