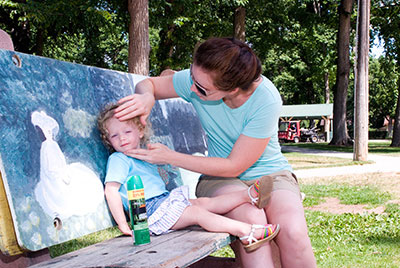 The Division of Vector-Borne Diseases (DVBD) works to detect and prevent diseases spread by mosquitoes, ticks, and fleas.

Dengue is a leading cause of illness in the tropics. Forty percent of the world’s population lives in tropical and sub-tropical areas at risk for dengue. An estimated 390 million people are infected each year and 100 million people get sick. DVBD staff have developed a dengue vaccine candidate that is now being clinically evaluated in the United States and Colombia for safety and efficacy. Phase I and Phase II trials showed that the DENVax vaccine candidate was safe, well-tolerated, produced antibody levels to protect against all four dengue viruses, and provoked an adequate immune response. Phase III clinical trials began in 2016.

Nootkatone is an essential oil found in Alaska yellow cedar trees, some herbs, and citrus fruits. It can also be produced through sustainable, industrial-scale fermentation. Nootkatone is widely used in the fragrance industry and is prized for its distinct, fresh, citrus scent. DVBD holds three patents on nootkatone and is working with Evolva, our exclusively licensed commercial partner, to evaluate and develop next-generation pest control products.

Nootkatone appears to kill biting pests, including mosquitoes and ticks, in a unique way, different from other insecticides already registered by the US Environmental Protection Agency. This could help in the fight against mosquitoes that have become resistant to current insecticides. Learn more and watch a videoExternal.