CDC partners with health department partners and others through EHS-Net. These partners have advanced evidence-based practices to prevent foodborne outbreaks in their communities. For tools and other resources from EHS-Net, explore our Tools from Funded Partners page. 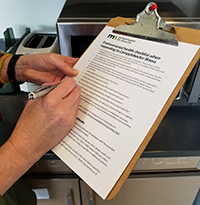 Minnesota created checklistsexternal icon for environmental health professionals to use when investigating norovirus, campylobacteriosis, vibriosis, and suspected bacterial intoxication. The checklists include information on environmental assessments, characteristics of the pathogens, and pathogen-specific investigation questions.

Minnesota’s EHS-Net’s funded research on restaurant sushi preparationexternal icon and storage practices highlighted the need for training for regulatory staff on identifying and citing food code violations on parasite destruction and time as a temperature control in sushi restaurants. Minnesota developed a training using data from EHS-Net research and delivered the training to state and local health department regulatory staff in Minnesota.

An EHS-Net-funded evaluation of New York City’s restaurant grading programexternal icon showed that the program improved food safety. The proportion of restaurants scoring an “A” on their inspections increased by 35%. And nine of ten New York City residents said they considered grades when deciding where to eat out. The positive results of this program supported a later initiative to expand grading to the city’s approximately 5,500 mobile food vending units in 2018. 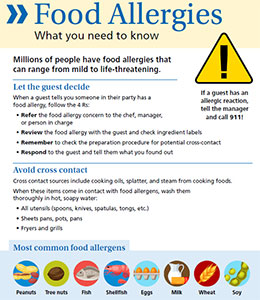 Rhode Island’s EHS-Net funded research found that Rhode Island—the only northeastern state at the time that prohibited selling undercooked ground meat to children—had lower E. coli illness rates than other northeastern states. These findings influenced the Food and Drug Administration (FDA) to prohibit the sale of undercooked ground meat in children’s menu items in the agency’s Food Codeexternal icon (Section 3-401.11(D)(2)). Jurisdictions can use the Food Code as a model for their own food codes to improve restaurant food safety.

Rhode Island’s environmental assessment of a Salmonella outbreak in 2010 led to the discovery that improperly designed slicers contributed to the outbreak. The slicers could not be properly cleaned, which created harborage sites for the bacteria. In response to this outbreak, Rhode Island’s EHS-Net program worked with NSF International to create new slicer standardsexternal icon that went into effect in November 2012 and also worked with FDA to create educational materialsexternal icon about these standards.

Rhode Island visited 50 restaurants in the state to assess restaurants’ progress in meeting requirements of the state’s 2013 allergy awareness law. They found that most of the study restaurants were not meeting the requirement to have a food allergen information poster in the kitchen. To address this gap, Rhode Island staff developed food allergen posters on what to know pdf icon[PDF – 87 KB]external icon and how to respond to reactions pdf icon[PDF – 606 KB]external icon. They distributed them to 5,000 high-risk restaurants throughout the state.

Rhode Island reviewed its foodborne illness complaint system and found that it identified most of the outbreaks investigated in the state and detected illnesses in a timely manner, likely contributing to prevention of further illnesses. These findingsexternal icon provide evidence of the vital role complaint systems play in detection and prevention of foodborne illness outbreaks.

Nevada tested a machine-learning model that uses anonymous web search and location data to identify restaurants that have customers with foodborne illness symptom complaints. They foundexternal icon that restaurants identified by this model were more likely to have health code violations, suggesting an active lapse in food safety. The model could help health departments target their food safety resources to restaurants that need it most. 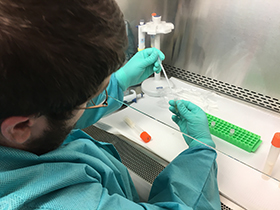 Tennessee developed a sampling plan to detect norovirus in the environment during outbreaks. They successfully found norovirus in the environment in 13 outbreaks. These outbreaks occurred in restaurants, long-term care facilities, and an outdoor adventure site (read an article about one of these outbreaks). Norovirus was found in a variety of places, including a food cart handle, the underside of a table where a child had vomited, under a changing station mat at daycare, juice dispenser buttons, touch screens, and phones. Tennessee shared the locations with the outbreak facilities, who then responded with targeted and aggressive interventions. Because the project showed that environmental sampling can enhance investigators’ ability to understand and respond to outbreaks, Tennessee added environmental sampling to their outbreak investigative toolbox and is currently developing an environmental sampling workshop in collaboration with CDC and the Association of Food and Drug Officials (AFDO). 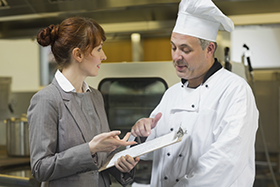 Data from several multisite EHS-Net studies show that kitchen manager food safety certification is consistently linked to food safety. For example, one studyfound that restaurants that had outbreaks were less likely to have kitchen managers certified in food safety than restaurants that had not had outbreaks. EHS-Net findings influenced FDA to strengthen manager certification requirements in its model Food Codeexternal icon (sections 2-102.12 and 2-102.20). As of 2017, food service establishments are required to have a certified kitchen manager present during all hours of operation.

In 2016, the U.S. Department of Agriculture’s Food Safety and Inspection Service (FSIS) released a new ruleexternal icon on records to be kept by official establishments and retail stores that grind raw beef products. The rule requires establishments to maintain beef grinding logs, which will improve FSIS’s ability to trace the source of foodborne illness outbreaks. Findings from the EHS-Net Beef Grinding Logs Study were part of the scientific rationale behind the new rule.