The restaurant industry may need to focus on controlling the temperature of tomatoes before holding. For example, tomatoes could be refrigerated in all stages. Or time control could be used to keep cut tomatoes safe.

Programs could be created to improve tomato handling in restaurants. Such programs could lead to fewer outbreaks linked to tomatoes. During inspections, environmental health specialists could look for poor tomato-handling practices. Then they could help managers and workers fix them. 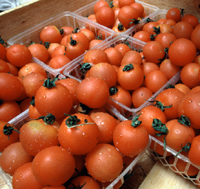 In recent years, at least 12 Salmonella  foodborne illness outbreaks have been linked with fresh tomatoes. Investigations suggest that the tomatoes probably got tainted early, such as at the farm or during processing. In most cases, the tomatoes that caused the outbreaks were eaten in restaurants.

The U.S. Food and Drug Administration (FDA) advises restaurants on how to prevent germs on produce.

FDA also gives general guidance to reduce the spread of germs in the kitchen. FDA advises restaurants to

The purpose of the study was to describe tomato-handling practices in restaurants. The study focused on receiving, storing, washing, cutting, and holding tomatoes.

EHS-Net found that many restaurants did not follow FDA advice when handling tomatoes. Restaurants

Tomato Receiving and Storage
Average temperature of tomatoes in receiving was 57°F.

Temperatures of tomatoes in storage were higher than 41°F almost half (46%) of the time.

Tomato Washing
Tomatoes were washed in the wrong type of sink (for example, hand sinks) 6% of the time.

Tomatoes were soaked 18% of the time.

Wash water was not at least 10°F warmer than the tomatoes 21% of the time.

Tomato Cutting
Produce or tomato-only cutting boards were not used 49% of the time.

Single-use gloves were not worn 36% of the time.

Tomato temperature was above 41°F after cutting 88% of the time.

Temperatures of cut tomato batches were above 41°F in holding 52% of the time.

74% of cut tomato batches held above 41°F had a maximum holding time of more than 4 hours.