Restaurant managers and food-safety programs should work to improve food prep practices. Efforts should focus on

Researchers should do more studies to find out what affects these food prep practices. This information could be used to find barriers to safe food prep. Fixing those barriers could help improve practices and reduce illness. 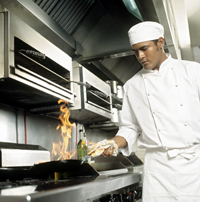 Studies show that foodborne illness is linked to eating outside the home (for example, in restaurants). They also show that food workers often do not handle food safely. It is important to learn more about how restaurant workers prepare food. This can help us find ways to improve how they prepare food.

This study looked at four things restaurant workers do that affect food safety:

Vomiting and diarrhea are symptoms of illnesses that can be passed through food.

In an 8-hour shift, workers

More than half of workers did not always wear gloves while touching ready-to-eat food.

Between touching raw meat and poultry and touching ready-to-eat food,

Just over half of those who cooked food did not usually use a thermometer to check if food was done.

Some workers (5%) said they had worked while they had vomiting or diarrhea in the past year.

Workers who were 25 and older

Managers washed their hands more often than did nonmanagers.

Workers who cooked changed their gloves more often than those who did not cook.

Workers in chain restaurants used a thermometer to see if food was done more often than other workers did.