Dogs carry ticks, and some types of ticks can carry a bacterium called Rickettsia rickettsii. When infected ticks bite people, this bacterium may be transmitted, causing Rocky Mountain spotted fever. The rate of this potentially deadly disease in eastern Arizona is 70 times the U.S. national rate, and people who get it there are more likely to die than in other parts of the country. Ticks also carry a variety of other diseases that can be transmitted to people, making their overall presence very undesirable.

A tick bite can seem harmless at first: just a small red area. But if Rickettsia rickettsii is present, it can cause a serious and potentially fatal disease called Rocky Mountain spotted fever. This rapidly progressing disease begins days or weeks following the bite of an infected tick. Symptoms begin with high fever and chills. Severe headaches, muscle aches, nausea, vomiting, and fatigue can also occur. As the disease progresses the bacteria damages the lining of the blood vessels causing widespread vasculitis and organ damage. When left untreated, or when treatment is delayed, Rocky Mountain spotted fever can be fatal.

Since 2003, more than 250 human cases of the disease have been reported, and 20 deaths have occurred in Arizona alone. The disease is occurring exclusively on tribal lands and causing illness among American Indian populations, in part because tribes often struggle with how to control dogs and ticks within their borders. In Arizona, the disease affects the youngest residents most commonly; more than half the deaths there have been among children. Evidence of RMSF has been found on at least six different reservations, placing over 200,000 people at risk. This was a public health crisis that needed immediate attention.

Beginning in 2012, a multiagency team was brought together to address the problem. The team members realized that key components of tick control had to be community education and involvement at the local level, in part because a tick bite can initially seem so unthreatening to the average person. Community involvement started with two centers from CDC (the National Center for Environmental Health and the National Center for Emerging and Zoonotic Infectious Diseases), the local health departments, Indian Health Service Office of Environmental Health and Engineering, and other local leaders attending a three-day workshop on integrated pest management (controlling pests from a holistic standpoint, disrupting their desired “home,” interrupting lifecycles, eradicating pests, and keeping areas free of trash and debris that may harbor ticks). 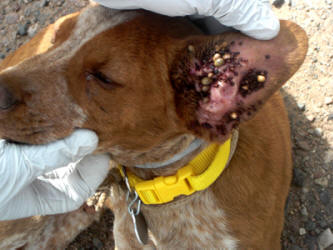 In response to the public health threat, a pilot project, Rocky Mountain Spotted Fever Rodeo, was planned to round up dogs and kill ticks. Scientists within the Rickettsial Zoonoses Branch in the National Center for Emerging and Zoonotic Diseases and the National Center for Environmental Health worked collaboratively on devising this solution to the problem posed by ticks on affected reservations. Elements of the rodeo included

The Rocky Mountain Spotted Fever Rodeo project featured strong collaboration from a number of organizations. The multiagency group that conducted the project started with several objectives:

The group divided into teams to meet with approximately 600 homeowners and inform them of the tick control process. While at the homes, the teams offered free leashes and explained why dogs should be prevented from roaming free (to keep them from picking up ticks from other areas). The group tackled the tick control effort by applying a pesticide spray around yards, and also by making four applications during tick season (spring through fall). Additionally, the group placed a long-acting tick collar that remained effective for up to eight months on every dog in the study area. More than 2,000 collars, donated by Bayer, were fitted to dogs. In addition, students and faculty from the Virginia-Maryland Regional College of Veterinary Medicine offered free spay and neuter services to curb the dog population.

Impact of the Pilot

At the end of the first year of the project, 4 months later, only 1% of dogs had ticks, while 63% of dogs outside the study area had ticks. During year 2 of the RMSF Rodeo effort, tick levels were sustained below 3%, with the continued use of the long-acting tick collar alone. Even more exciting, the tribe expanded key ideas from the RMSF Rodeo reservation-wide, tackling the issue of ticks at every house. The multiagency task force efforts resulted in significant success in terms of tick control. With an emphasis on long-term health improvements, talks are under way to determine how this initiative could become locally funded and sustained.