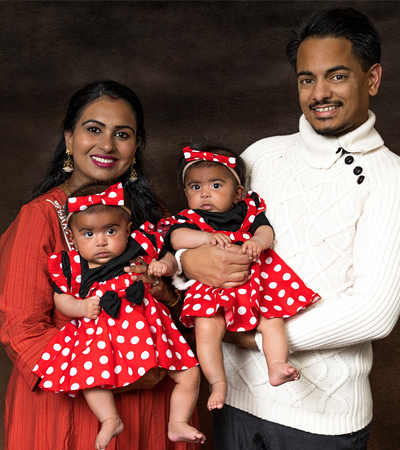 Navdeep Singh was diagnosed with thalassemia at 9 months of age, when his parents sought medical attention because their lively, happy baby experienced a drop in energy level and looked pale. His parents were shocked by the diagnosis, and initially thought the doctors made a mistake. They couldn’t understand how their son ended up with thalassemia, a genetic blood disorder they never heard of or even knew of within any extended family members.  Navdeep’s parents then discovered that they were, in fact, thalassemia trait carriers pdf icon[PDF – 24 pages]external icon.  While Navdeep’s parents each had one copy of the defective gene needed to make healthy red blood cells, Navdeep had inherited two copies of the defective gene (received one from each parent). Navdeep had a severe form of anemia that would require red blood cell transfusions every 3 to 4 weeks throughout his life. With this understanding, Navdeep’s parents accepted his thalassemia diagnosis and began to consider what it might mean for Navdeep’s future.

Doctors reassured Navdeep’s parents that he would live a good life and would be able to have children someday, despite conflicting health information for people living with thalassemia. It was well known that people with thalassemia could suffer from a variety of complications, such as heart problems, that could lead to a shortened lifespan. Because they weren’t sure what kind of future to expect for Navdeep, his parents decided to throw a big celebration each year on his birthday. Navdeep’s father supplied refreshments for the entire school for Navdeep’s 5th birthday and continued this tradition throughout his grade school years.

Navdeep was always very open with others about his thalassemia diagnosis. In elementary school, his classmates knew that he missed school once per month in order to receive a blood transfusion. To make the transfusions seem less burdensome, Navdeep’s father always took him shopping afterward to pick out a new toy. Navdeep had a loving, supportive family and mostly took his thalassemia management in stride. On several occasions, he was admitted to the hospital after developing an illness. At each hospital admission, he ended up having a person with sickle cell disease as his hospital roommate. Because of these encounters, Navdeep developed a fuller understanding of sickle cell disease (a genetic blood disorder that can cause anemia and other complications) and began participating in Sickle Cell Disease Awareness Walks.

Both of Navdeep’s parents were professors of electrical engineering. Navdeep began college as an engineering major, expecting to follow in his parents’ footsteps. However, he soon realized that engineers didn’t work with people nearly as much as he liked and therefore, changed his college major to nursing. Since he was 4 years old, Navdeep kept a close relationship with two thalassemia nurses. In fact, when his nurses moved to a new hospital across town, he followed them. Their compassion and dedication to his health care and to other patients impressed Navdeep greatly and inspired him to get a bachelor’s degree in nursing.

While in nursing school, Navdeep took part in medical missions to Kenya and South Africa to assist in delivering primary care to people in need. When he went to graduate school in nursing, he signed up for medical missions to Haiti and the Philippines, where he worked with people with HIV. One woman with HIV he met said “I don’t want to become dependent on pills to manage my health.” Navdeep responded by lifting up his shirt and showing her his taped-on pump, which was delivering medicine through a needle into his abdomen at that very moment. He needed to take this medication, known as iron chelation therapy, to remove the excess iron that he was receiving from his blood transfusions. People who receive regular blood transfusions need iron chelation therapy to prevent a condition known as iron overload in which the excess iron from the transfusions builds up and damages the heart, liver and other organs. Navdeep told the woman “I put a needle in my belly every day to manage my health and wish that I could just take a pill like you.” This seemed to motivate her to take her pills as prescribed.

Navdeep’s childhood experiences with sickle cell patients—who were largely African American—gave him a special interest in healthcare disparities. pdf icon[PDF – 1 page]external icon He went on to devote himself to the study of pain in African Americans, and his doctoral thesis research investigated pain relief for African Americans suffering from cancer. For his outstanding work, Navdeep was selected to be a prestigious Robert Wood Johnson Future of Nursing Scholar. He also won the Cooley’s Anemia Foundation-ApoPharma Distinguished Scholar Award in 2018.

Like many people with chronic conditions, Navdeep has experienced many challenges in terms of health insurance coverage. Initially, he was covered by his parents’ insurance and then from employer-provided coverage as he started working full-time as a nurse. However, challenges arose when he decided to start graduate school. No longer employed full-time, he applied to numerous insurers but was denied coverage by all because thalassemia was considered a pre-existing conditionexternal icon. He had to take on a full-time nursing job while also going to graduate school. This enabled him to once again obtain health insurance coverage through his employer.

Being denied health insurance led to an awakening for Navdeep. He decided to speak out about his experiences to help ensure that healthcare coverage would be available for himself and for others with chronic conditions when they needed it. He spoke to everyone who would listen about how he had been denied healthcare coverage simply because he had been born with thalassemia. Navdeep was interviewed on National Public Radio’s weekly program This American Life about his experiences trying to obtain healthcare coverage after facing multiple rejections (see link to interview below). He felt that his tireless efforts to help bring awareness to this issue paid off when new legislation (the Affordable Care Act) was introduced in the United .States that prevented people with pre-existing medical conditions from being denied health insurance coverage.

Like many people with thalassemia, Navdeep had developed low bone mass (osteopenia) by early adulthood. To counteract this, he began to engage in regular weightbearing exercise. While he did some weight training on his own, he felt safer doing the more demanding weightlifting in the presence of a trainer. He also started swimming once a week and taking part in deep water aerobics with a group. In addition, he got a smartwatch and began taking part in workout challenges with friends and others with thalassemia. His commitment to regular exercise was rewarded when the results of his next bone scan came in and Navdeep saw that his bone mineral density, a measure for bone health, had improved significantly.

Navdeep had some doubts about whether he’d be able to find a life partner who would be accepting of his thalassemia diagnosis and so he mostly avoided dating. Eventually, his father decided to act as a matchmaker. He helped find a young woman named Paree on an Indian dating website who seemed like a promising match. Navdeep contacted Paree and made sure to mention his thalassemia diagnosis up front. He answered all of Paree’s questions about thalassemia, including whether or not it could be passed on to children. Navdeep and Paree hit it off and were married in April 2016. Navdeep invited his two lifelong nurses to the wedding. He asked them to stand so that he could pay tribute to them for the tremendous impact they have had on his life. Navdeep and Paree are now proud parents of their son Ekam and twin daughters Ajuni and Mehdni.

Reflecting on his life, Navdeep says ”I always thought that thalassemia would limit me, and I never imagined that I could have the full and rewarding life that I do now.”

Here are some of Navdeep’s tips for others living with thalassemia:

CDC thanks Navdeep for sharing his personal story.